Film Review - I Hope They Serve Beer in Hell 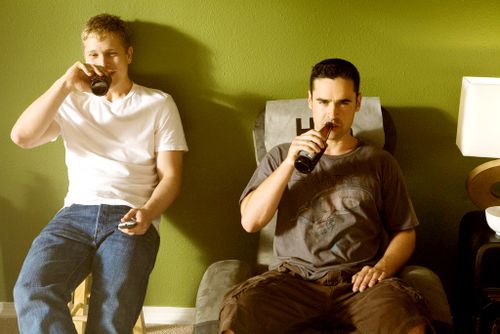 “I Hope They Serve Beer in Hell,” based on a book by author Tucker Max, spent a few weeks on the New York Times Bestseller List. Forgive the disrespect, but who in the heck is Tucker Max? Clearly the man has some sort of following, necessitating a feature film version of his successful novel (though let’s be fair here, both Artie Lange and Tori Spelling also scored time on the Bestseller List). After seeing the picture, perhaps it’s best to keep a safe distance from Max, since he comes across as a truly nauseating human being. Who knows how the man conducts himself in civilian life, but as a force of entertainment nature, he’s the worst thing to happen to cinema in a very long time.

Tucker Max (Matt Czuchry, in a career-killing performance) is a hateful soul who occupies his time chasing women and indulging his insatiable thirst for cruelty, basting in the juices of misogyny and spite. Watching pal Dan (Geoff Stults) get ready to walk down the aisle, Tucker arranges for a bachelor party night at a special strip club located hundreds of miles away. Recruiting Drew (Jesse Bradford), still reeling from a harsh break-up, the trio head to Lucite heel nirvana, where they encounter and humiliate a series of friendly women on their way to total inebriation, save for a special stripper (Marika Dominczyk), who charms the boys with her ability to speak fluent Nintendo while showcasing aggressive verbal one-upmanship. It’s all well and good for Tucker and guys, but when they head their separate ways, the night takes a drastic turn, forcing the cavemen to confront their vile manners.

I’ll cut to the chase: “Beer in Hell” is trash. It’s a garbage display of filmmaking cheering on a noxious premise that essentially encourages the viewer to celebrate hate. Max’s prose is allegedly intended as satiric, acting as the antidote to the chick-lit shenanigans that are just as ruthlessly shallow, but never come across this infuriated with the opposite sex. Adapting his book for the big screen, Max maintains a certain towel-snapping tone from frame one, using himself as the ringleader of rage, depicting Tucker as a rascally lout who can charm the pants off any woman around and talk his way out of all sorts of trouble. He’s a beer-swilling, bra-snapping Dorothy Parker, containing the expected repulsion to his personality by passing around heavy dollops of frat boy charm. Just don’t accept any open drinks from him and check his mouth carefully for sores.

Though director Bob Gosse sees it differently, I couldn’t find a single redemptive quality about Tucker that would read as appealing. He’s an alien of lust and bile, and there’s nothing even remotely funny about his behavior. I realize I’m playing into Max’s publicity bear trap here by condemning the obvious, but I’ve never seen a film so openly loathe women, reducing them to date rape bookmarks and irrational complainers. The material is actually so delusional, Drew runs around describing how he’ll cut ladies up with a knife if they keep talking to him. And this is the comedy, folks. It’s a disgusting shovel of scorn that Gosse keeps slamming into the face of the audience, somehow under the belief that Max’s shtick is the birth of a new jock-lit posture that will snatch back the chalice of futility from the “Sex and the City” ghouls. And if someone calls Tucker on his venom? Oh, it’s all a joke. One big gag, and your panties are screwed on too tight if you don’t enjoy it. I heard Ted Bundy was similarly uproarious.

With muddy cinematography that makes the first DVD release of “Highlander” look like sterling 4K digital projection, a plot point that features Tucker on a furious quest to bed a little person, performances that aren’t shy to hit squealing notes of idiocy, and a finale that has Tucker literally (and graphically) defecating all over himself, it’s not hard to dismiss “Beer in Hell” as a complete waste of both time and filmmaking effort. The knife across the throat comes in the finale, where Max and Gosse, clearly under the influence of peyote, decide to make a sympathetic figure out of Tucker. The sad clown finds his horn has lost its honk while his friends go off to do that silly maturing nonsense. It’s madness. Pure madness. Surely this Max fellow is an Onion creation.

“I Hope They Serve Beer in Hell” is an astoundingly crude and amateurish film, and no amount of supposed irreverence can mask the fact that the material is a pure, unfiltered hate crime, not a permissive, lampshade-wearing male bonding comedy. If anything positive can come from this film, it might be the mass acceptance of gay marriage across the land. After all, if Tucker Max symbolizes where heterosexuality is headed, perhaps the alternative is worth a shot. 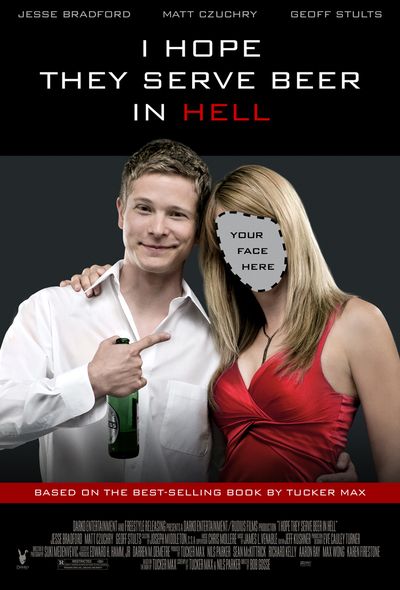 A few week on The Times bestseller list...ohh, you mean a few years. How is this film any worse than The Hangover? It is certainly more realistic. You seem to loathe Tucker Max, which is mostly warranted, but this is a movie(see also: not real, fiction, entertainment). The film is not intended to promote any social ideal or lack thereof.

FYI-Peter Jackson does not promote the enslavement of alien beings. Sasha Cohen does not have a blatant disregard for the safety of adopted African American babies on motor scooters. You should never be allowed a soapbox to speak from.

Who is Tucker Max again?

For comparison: Capitalism does $240,000 on FOUR screens.

Sorry Tucker, your film career is over.

There are people actually out there defending this tool and his crappy movie?

Wow. Those first two comments are probably Tucker Max himself.

For what it's worth, I would rather listen to the Brianorndorf.com soapbox any day than the Amber soapbox. I like to avoid the soapboxes that are pro-sexism and don't have any idea what they're talking about when they say movies don't send any messages or mean anything. Yeah, that's why directors make movies (PS - Peter Jackson didn't direct District 9), they make movies so that no one will listen to what they have to say or witness their take on the world.

Keep up the good work Brian! Thanks for reminding me of the garbage out there so that I can appreciate more the movies I actually spend money on seeing :)

I'm sure this horrible and troubling film will do well enough with the frat boy types it has been engineered to appeal to, and date-rape culture will continue to thrive on college campuses.