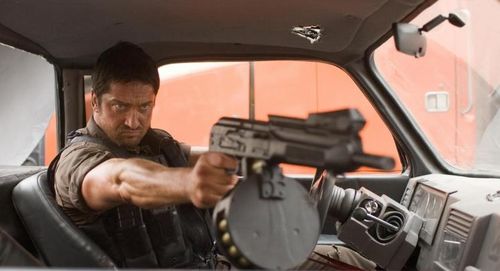 Mark Neveldine and Brian Taylor are the masterminds behind the “Crank” franchise of cynical, 8-bit, head-smashing entertainment. “Gamer” is the duo’s first foray outside of the suffocating Statham kingdom, but I could scarcely tell the difference. A rude, crude, deafening valentine to overkill cinema laughably passed off as muffled social commentary, “Gamer” is ideal for fans of the nauseating “Crank” series, as it traces along the same old lines of chaos, revealing that these directors, credited simply as neveldine/taylor, are two of the most inept minds working in the industry today.

In the ill-defined future (the technology looks 2097, the soundtrack and the costumes are strictly 1997), a grim video game titled “Slayers” has come to dominate the world. Using prisoners to act as mind-controlled avatars for players at home, the men are sent into battle, with one warrior, Kable (Gerard Butler), close to winning his freedom through repeated combat zone victory. Constantly reminded of the domestic serenity he lost when sent behind bars, Kable looks to his user, Simon (Logan Lerman), to help set him free. Off to find his wife (Amber Valletta), who’s trapped inside her own virtual reality prison, Kable finds his every move thwarted by billionaire tech guru Ken Castle (Michael C. Hall), who isn’t ready to give up his top soldier without a fight.

“Gamer” is another sensory eruption for Neveldine and Taylor, who, in their third feature film, have successfully proven their unconditional devotion to nonstop aggression. The anarchy wasn’t cute in “Crank” and it kneecaps “Gamer” immediately upon launch. Equipped with their customary handheld digital cameras, the directors send the cast into a hailstorm of severed body parts and flying bullets, getting off on the mayhem of the gaming floor, where Kable has to blast his way out of every corner. It’s a thump of animated sound effects and blood spattering, aching to convey a well-established tone of heightened video game brutality, only here the boys seem to enjoy the taste of their own poison. The directors get stiff over this stuff, burning off whatever cautionary fringes of the screenplay remained before production. “Gamer” has too much fun with the gratuitous violence, nudity, and thespian cartwheeling to really pay attention to the small blessings such as plot, rules, or consistency. Neveldine and Taylor treat that stuff like poison ivy. 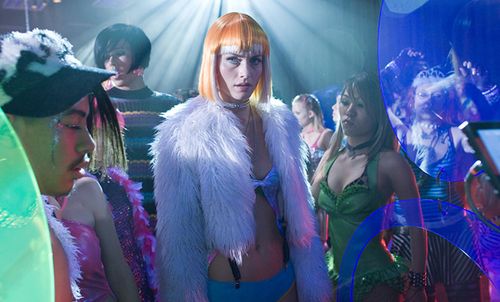 “Gamer” does have the stench of a film that was torn apart a few times in the editing room. Kable’s quest for familial peace is a subplot that feels larger to the overall spectrum of “Gamer” than the final product allows, especially with a supporting cast of familiar faces (including Allison Lohman, Keith David, Kyra Sedgwick, Ludacris, Terry Crews, and John Leguizamo) around suggesting a beefier narrative previously in place to support the ultraviolence. With the story largely scraped away, “Gamer” is an empty shell of hyperactive visuals, most centered on the pornification of the world through the new online frontier, leaving the directors ample room to shoot extreme close-ups of sweaty, writhing bodies and invent characters named “Rick Rape,” played with specific favor-cashing embarrassment by Milo Ventimiglia.

Granted, I shouldn’t complain too loudly about the lack of story in “Gamer” when all Neveldine and Taylor can do with their script is make obvious internet user jokes (the face-stuffing obese guy turns into the sex bomb during his online hours) and dream up a one-note villain character in Ken Castle, played with eye-popping repulsion by Hall, who spends his every last screen minute hamming it up to a rotten Hormel degree. Hall is appalling in his big screen baddie debut, straightening out every last acting school kink imaginable. It’s an insufferable, Razzie-polishing piece of acting, though to be fair to the beloved “Dexter” star, the filmmakers have encouraged everyone in the cast to swing for the rafters. How weird is it to report that Gerard Butler, of all people, gives the most metered, appealing performance of the picture.

“Gamer” is junk food that intended to speak on the insulation of the gaming soul at one point during its journey to the screen. The theatrical version does away with any exciting subtext to provide an empty calorie thrill ride, giving hungry audiences their dose of booms and wows for the month. A smarter director might’ve accepted the challenge with a suitable, creative plan of attack. Neveldine and Taylor simply spray their venom across the screen with little vision, once again making a friendly trip to the multiplex feel like undeserved torture. 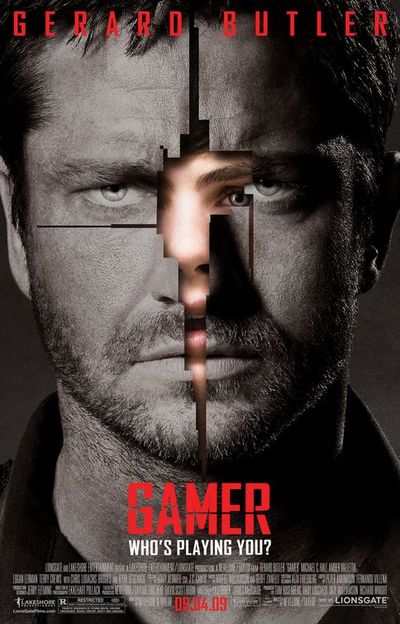 Can't wait to see how Michael C. Hall does in Gamer. I always see him as Dexter... Never got into Six Feet Under.. Some people have said they always think he looks gay! :-(

The previews of Gamer make him look twisted and controlling... not a far stretch ;-)