Film Review - Cloudy with a Chance of Meatballs

Using Judi and Ron Barrett’s beloved 1978 book, “Cloudy with a Chance of Meatballs,” as inspiration, the big-screen adaptation takes off in its own special direction, mixing clever cartoon timing with an Irwin Allen valentine, emerging as one of the strongest CG-animated efforts of the year. Energetic and dripping with the sort of cutting-edge, reference-heavy humor that rules the genre today, “Meatballs” makes for a hilarious and obviously mouth-watering sit, the hunger dialed to impossible levels if viewed in a house of 3-D.

An aspiring inventor since he was a boy, Flint Lockwood (voiced by the great Bill Hader) is looking for an invention that will change the world, helping him to deal with life on the dreary fishing island of Swallow Falls. A broken community, reeling from the closure of the local sardine cannery, Swallow Falls is in need of a dietary change, urging Flint to finish his greatest invention: a device that turns water into food. Accidentally launching his prize into the sky, Flint finds the machine raining junk food down from the clouds, much to the delight of the locals and shifty Mayor Shelbourne (Bruce Campbell). Encouraging the national media attention is amateur weather reporter Sam Sparks (Anna Faris), who finds she has more in common with Flint than just interest in the climate. While the town’s fortune radically changes due to the food storms, it’s only a matter of time before danger rises, putting Flint on a quest to salvage his invention and what’s left of his good name.

Directors Phil Lord and Chris Miller are perhaps best known for their work on the MTV cartoons series “Clone High,” which might be the proper introduction to the tone of “Meatballs.” Not exactly drowning in irreverence, the film still retains a razor-sharp spark of comedic discovery, treading the same Adult Swim waters favored by younger animators working today. The cheery satiric tone infuses “Meatballs” with a special mischievous spirit and blends superbly with the more traditional heartfelt beats of the story, making for a familiar animated event spiked with gorgeous, creative laughs, staying within the boundaries of the expected but slinking away here and there to freshen up an often unbearably predictable genre.

The invitation for food-based mayhem is treasured by the filmmakers, who sculpt an impossibly beautiful film, a visual feast that’s elastic enough to appease slapstick fans (the picture often resembles a monster-budgeted Looney Tunes short), but also develop a sumptuous visual scheme that toys with inventor constructs, epic (edible) meteorological events, and rowdy community chaos. The animation is a tremendous effort, creating a full-bodied environment for Swallow Falls and an imposing one for the weather sequences, where hamburgers, spaghetti, and corn rain down from the sky. The 3-D augments the work splendidly, lending depth to the tasty tempest, bringing the spread of deliciousness right to your nose.

When the miracle turns unstable, and oversized food arrives from the heavens to destroy the town, the 3-D is a valuable tool for emphasizing the dramatic disaster movie tributes the filmmakers let loose in the final act. “Meatballs” is colorfully swirled and silly, rivaling Pixar’s best efforts with its luxurious and meticulous glow. It’s a wonderful picture, but also a feature that could be appreciated with the sound off, showcasing extraordinary animation that understands the delicate marriage between cozy cartoon and big screen spectacle. 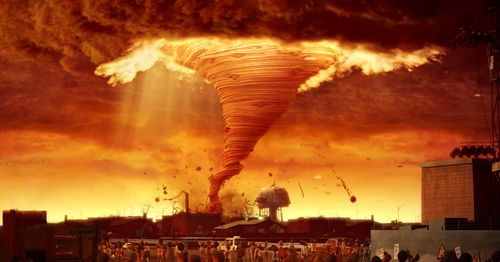 The voice casting also plays a vital role in “Meatballs.” The directors reveal a terrific ear for actors, with Hader and Faris making enchanting romantic partners, each performer able to bounce from playful to panic in very few moves. Hader’s earnest quiver as Flint offers the material an agreeable innocence as well. The fun doesn’t stop there, with Bruce Campbell, Lauren Graham (as Flint’s mother), Andy Samberg (clowning it up as the grown-up, yet still quite infantile Coppertone Baby-style icon of Swallow Falls), Benjamin Bratt (as Sam’s all-purpose Guatemalan cameraman), and Mr. T (portraying the local overzealous cop) joining the party. Yes, Mr. T, and he’s pitch-perfect in the role. The third lead is James Caan, here as Flint’s doubting father, a simple sardine man who watches as his son creates baffling scientific wonders. While the execution of the father-son dynamic is a syrupy device intended to force-feed some sentiment into the story, often dropped into the proceedings without the proper emotional lubrication, Caan’s reading of generational bewilderment is authentic. The exaggerated character design is a burly man with features hidden behind thick bushes of facial hair, but Caan captures a knowing parental stance, somewhere between shame and pride. The ensemble is perfect, filling “Meatballs” with a rich vocal representation that makes the highly absurd premise believable and consistently hilarious. 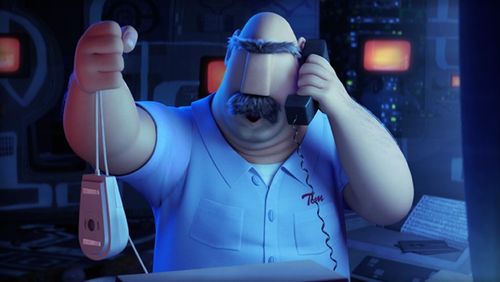 As the fortune of Swallow Falls spirals out of control (yes, obesity is discussed), “Meatballs” explodes with action and absurdity, reaching for an impossible summit of hysteria that features Flint and the gang trying to stop the invention as it achieves V’ger-like powers and observes the residents floating away from danger on oversized sandwiches. It’s the closing act on a magnificently executed comic fantasy. After watching a parade of hamburger hail, ice cream snowball fights, and Jell-O kingdoms, the film is sure to leave viewers starving upon exit. Armageddon never looked so delicious. 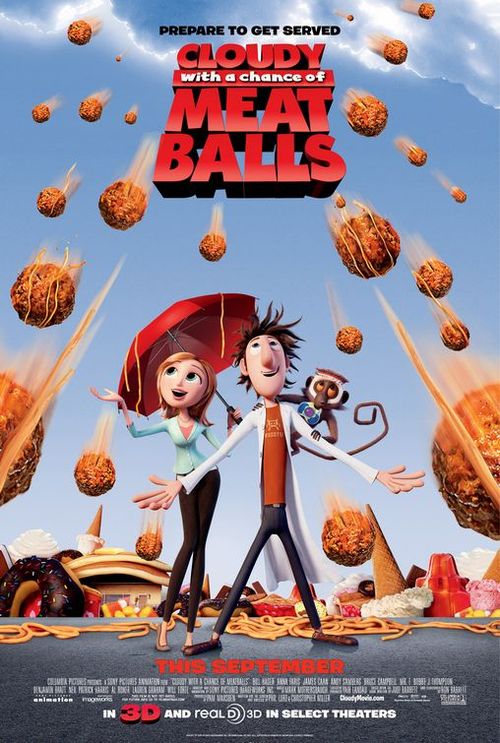 totally looking forward to seeing this; Cloudy with a Chance of Meatballs has to be the best children's books of all time