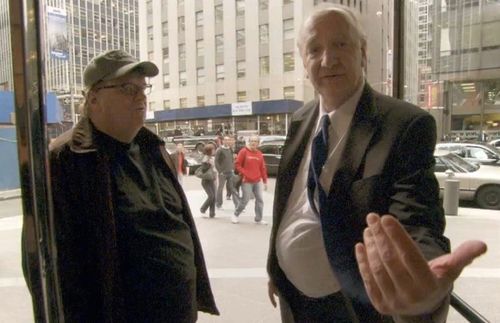 For his seventh feature film, Michael Moore assumes his prominent position of government watchdog, gathering fragments of corruption and humiliation to mold his latest attack on the powers that be in, “Capitalism: A Love Story.” Obviously there’s plenty of maddening evidence to work with, and while the picture comes off as overstuffed and unfinished, it still squeezes out incredibly forceful points on the diseased state of the union. Whatever it lacks in a red-target focal point, it’s still Moore doing what he does best: chipping away the layers of fraud that have calcified America, hoping to inspire others to storm the streets and question authority.

The topic here is capitalism, that ivory spine of the American Dream, helping to build a strong and prosperous country. But what if capitalism soured? What if the very concept turned from something intended to benefit the many into a private gold mine for the few? Fueled by the fallout that shadowed the financial collapse of the last year, Moore found his curiosity piqued by the unnerving nationwide turbulence that greeted the Emergency Economic Stabilization Act of 2008 and various other financial indignities. The divide between the rich and poor was growing wider, leaving Moore to question just what was running the Washington machine, the politicians or Wall Street.

Before the torches are lit and the anti-Moore matter is poked into a rage, keep in mind that “Love Story” is a comedy, bred in the same fashion as the rest of the director’s filmography. It’s the infotainment he’s built a brand name upon, and the mix of finger-pointing, streetwise shenanigans, and cooing pander makes for terrific cinema. “Love Story” deviates from previous Moore carnivals with its timely fashion, hoping to lasso an argument and an explanation for current financial woes while the griddle still burns, tapping into the rage that’s seeping into the national conversation. It’s a smart play by Moore, but it blunts his body blows some, scattering his arguments in so many directions, it’s hard to keep up. Of course the confusion is appropriate, what with a convoluted financial system built to exclude the masses (creating a “plutonomy,” much to the delight of the money men), but it makes for a long 125 minute sit when previous Moore films have flown by with exquisite fluidity. 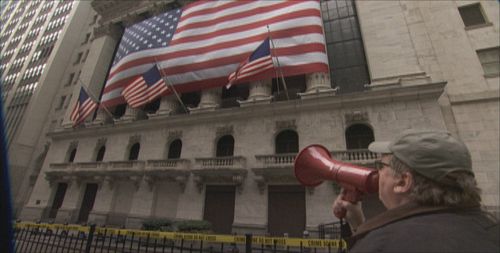 Opening with the juxtaposition of ancient Rome with modern America, “Love Story” seeks to explore the rise of capitalism, from its peak in the 1960s to its current bloodied state today. What was once a semi-golden ride of prosperity and middle-class unity hit some rocky road in the late 1970s, but the tires blew out in the ‘80s, and Moore aims his crosshairs at the man responsible: Ronald Reagan. A president who bonded financial control to Wall Street tycoons, “Love Story” starts tugging at a thread that snakes through the Clinton administration  and ends up tied to the doorstep of Bush Jr. It’s a blizzard of secretive plans, corrupt politicians bought off to encourage deregulation, and fear mongering that set most of America up for failure, but not before unreasonable profiteering could be carried out. It’s capitalism unleashed, with humanity, or even the slightest bit of compassion, bled out of a system increasingly loyal only to a select few, not the necessary many.

Moore has always developed his finest points by reducing hysteria to focus on the common man. “Love Story” is ripe with heartland emotion, and while the numerous shots of teary eyed men and women read as a step too manipulative, the salient points remain. Caught in the web of greed and predatory promises, families are losing their houses, low-paying jobs, and faith in government. It’s an epidemic, reducing human beings to piles of cash for the plundering. Moore is careful to underline the invasive practices, including one pungent subplot that exposes major corporations taking life insurance policies out on their employees, making them profitable even in death.

Moore looks to end on a beat of hope, though even he seems tired of the war. As always, Moore hopes to challenge viewers with his vision of deception, using broad comedy to sweeten the poison (the director runs around Wall Street asking for the bailout money back and quizzes employees on the purposely complex financial system), but he ultimately aims to rile up the masses. “Capitalism: A Love Story” works skillfully as a battle cry, and while the fatigue shows, the feature presents a subject matter that needs to addressed and exhaustively discussed as much as humanly possible. 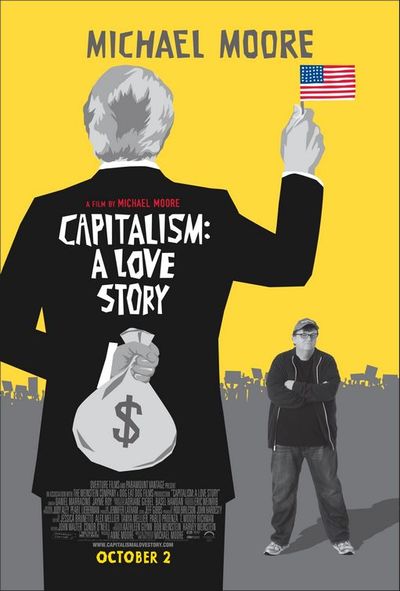 Capitalism is what made America Rich, powerful, created the middle class, enabled us to send men to the moon, to save Europe from catastrophe twice and stop the Russians cold. Unions and socialism do not create wealth or foster new invention and they did not make us rich. They tie down, strangle and suffocate innovation, creativity etc.
Lets keep that in mind.
There are abuses in any system and Capitalism is a living, breathing adaptive system that people will constantly try to work around so there needs to be some oversight but you can't put a pillow over it head and expect it to thrive.
We all know what National Socialism brought to Germany & Italy and what the Union of Soviet Socialist Republics & Communism achieved in China, Cambodia, Ethiopia and North Vietnam so lets keep that in mind.

Okay... So you gave Wall-E a D due to the fact that Disney was involved in the movie, but you fail to see the hypocrisy in a millionaire gaining even more wealth by producing a movie against capitalism.

I think El túnel's Juan Pablo Castel has a very good point when he says critics aren't really worth shit. How many great movies have you done recently? What makes you an expert in judging other people's hard work when you fail to produce your own?

I can tell this "I Point Out The Fail" lady hasn't bothered to see the movie.

So what's worse, a critic who sees every movie and has an informed opinion about art, or an anonymous internet commentator who throw bile from behind his wall of self-satisfaction, and he has even seen the movies in question?

Moore's point is the responsibility of capitalism, which has been abandoned long ago. It's out of control. Keep in mind that Moore is TRYING to do something with his time and money, like open a few eyes to the corruption that infests our great nation.

I liked Wall-E, but Brian makes a good point about its hypocrisy.

My god, people. Open your eyes.

If people spent as much time dealing with their own problems as they do complaining about Michael Moore, than maybe the world would be a better place.

Instead, it's a the same old arguments. Moore's just trying to open eyes, why is that such an awful thing?

And maybe I missed something, but what the hell does Wall-E have to do with anything??? Such stupidity on the right...

There's a great point about corruption in the movie that needs to be seen, not mocked. Moore might not present the entire story here (necessitating an 8 hour film), but he gets the ideas out there.

Not sure why somebody wouldn't want ideas and passion about American.

The world needs more movies that stir debate. Capitalism is a fine movie, but it makes people think and that's always a good thing.