Shane Acker’s “9” could be easily praised as a visionary fantasy film, using lavish CG environments to conjure an alternate reality of robotic monsters and misguided heroism. It’s a gorgeous film. However, it’s not always the most convincing motion picture. Expanded from Acker’s celebrated 2005 short film, “9” feels unnaturally fleshed out and overthought, dampening the excitement through extensive padding, making a concept that was once based in mystery feel exaggerated beyond its natural comfort level. It’s captivating eye candy, but something of a dramatic spinout.

In an unnamed place and time, a Scientist (voiced by Alan Oppenheimer) has created a series of tiny rag doll-like creatures to carry on after humanity has wiped itself out. The creatures, known as the Stitchpunks, have fashioned a community for themselves, under the rule of 1 (Christopher Plummer). When 9 (Elijah Wood), hidden away from view, awakens and befriends 2 (Martin Landau), the curious creature finds a treacherous world where machines prowl the terrain in search of a special talisman. When 2 is dragged away by one of the robotic hunters, 9 sets out to retrieve him, upsetting 1, who warns of great danger ahead. With the help of his numbered brethren (including Jennifer Connelly, John C. Reilly, and Crispin Glover), 9 enters the great unknown, stumbling upon the talisman, which unleashes a horror the Stitchpunks have never encountered before.

The Stitchpunks are miniature creations, burlap sack beings with camera iris eyes and blessed with immediate access to their innards, which open to find untold accessories and abilities revealed throughout the film. Director Acker knows these creatures intimately, constructing a post-apocalyptic wasteland of peril for the tiny adventurers that takes advantage of their size and mysterious origin. Acker’s enthusiasm is perhaps the film’s greatest fault and most compelling element; it’s a picture stuck between astounding visual accomplishment and storytelling inertia, hoping to convey a striking parade of oddity, only to repeatedly lose its sense of direction. Building from the mold of his short film, Acker comes across as a kid in a candy store, indulging his every Stitchpunk whim while executive producers Tim Burton and Timur Bekmambetov carefully guard his back. “9” piles on fantasy invention by the ton, playing fast and loose with the rules of the world to create a sense of nail-biting tension out of a production design that draws from the worlds of steampunk and graphic novels (its nearest comparison would be the actioner “The Mutant Chronicles”). Acker drops the viewer into the middle of the movie, preventing a normal acclimation period that would enhance the awe. Instead “9” tears off into confusion, the audience forced to identify with 9 as he charges full-steam into danger he doesn’t fully comprehend. It’s a disorientating approach that severs any emotional concentration, preferring to wow the eyes with fantastical sights rather than hit the heart with more deeply felt motivation.

Those attending the film for visual delights will not be disappointed, and “9” has special moments of spongy CG intensity that separates the picture from the normal routine of cutesy characters and blunted hazard (parents beware, this is violent film that also includes a few moments with strobe effects). Acker captures an interesting mix of the bizarre and otherworldly, but he’s also working on a tight schedule of conventional theatrics, issuing an action sequence about every 10 minutes to keep the energy level generously squeezed. The repetition grows old, even for a 70-minute-long film, smothering “9” with noise when the time could’ve been just as easily allocated to some much needed stupefaction.

To its credit, “9” is an original vision and well aware of its peculiarity. However, it’s a flawed film with a fractured execution, burdened with a resolution that reaches cloyingly for the heavens. “9” shocks but never stuns, exerting tremendous effort on a tale I doubt few will savor after the film ends. 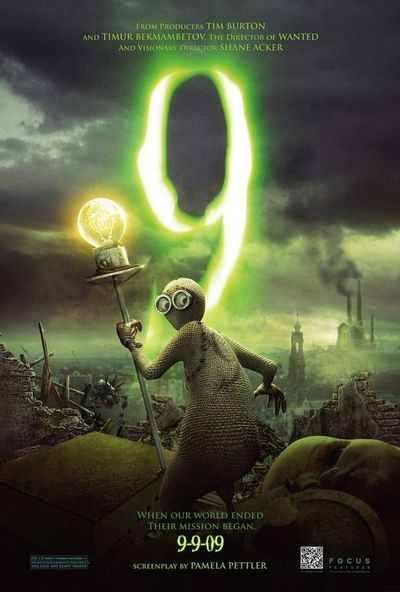