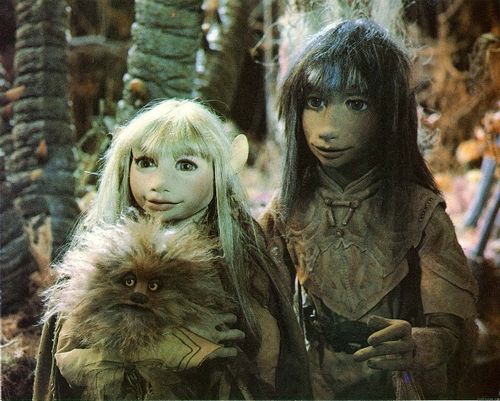 Had Jim Henson simply rested after giving the world The Muppets, nobody would’ve complained. After all, that Kermit-led revolution changed the face of family entertainment and restored some needed edge to G-rated comedy world. However, Henson was an energetic, curious creator, which led to a follow-up project that ate away years of his life, severely challenged the agility of his performers, and solidified him as an absolutely dazzling filmmaking architect. The picture was “The Dark Crystal.”

Henson’s flirtation with darker material and his infatuation with the thorns of invented mythology found a cozy home in “Crystal.” It’s a film intended for those who beg for a sense of adventure to their cinema, who revel in the joy of a filmmaker taking a risk and questing vigilantly to raise the art form a few needed notches. “Crystal” is a miraculous rush of innovation and storytelling patience, and, in the last 27 years, the feature has grown from a 1982 misfire to a cult wonder to a bona-fide classic that’s timeless in stature and masterful in execution.

When I write about the film now, I do so from a cradle of absolute reverence. However, ask my opinion when I was a wee lad, and “Crystal’ was probably the scariest ride in town. While Henson adored his young audience, he was never one to pander to the nose-pickers, preferring to challenge their eyes with visions of evil and the restorative effects of good; the ultimate war of destiny between the kindly Mystics (or urRu) and the wicked Skeksis.

What’s exhilarating about “Crystal” is that Henson and his collaborators (including co-director Frank Oz) were manufacturing a fairy tale from their own creative well. While influenced by the great fantasy works of the world, Henson paved his own road here, making certain every corner of the frame was bestowed with a mysterious creature or laborious design effort that created a consuming three-dimensional depth to the movie. Honestly, I’ve never seen such an extraordinary effort placed into a feature film before, and the way Henson and Oz take their time to let the details marry the film’s glacial, dreamy pace is endlessly impressive. It’s a directorial job of pure faith, and a design accomplishment (courtesy of wizard Brian Froud) that’s heart-stopping every inch of the way.

Sure, we have plenty of detailed fantasy juggernauts today, like Peter Jackson’s “Lord of the Rings” trilogy, yet “Crystal” is a film you can nearly reach out and caress; a picture blessed with unmistakable attention placed to weathered fabrics and wrinkled skin of the characters, not to mention Oswald Morris’s luxurious cinematography, which wields splendid coloring like a lethal weapon -- I’ve never viewed a more menacing shade of purple in my life.

Of course, all of this is in service of the puppetry, which, at the time, was an outrageous advancement in the field (and still wows today); Henson pushing his team to new limits of expression and sheer character size. With the vulture-like Skeksis, the performers sell the rancid, decaying regality of the species marvelously; a collection of vile beings in full-on panic and treachery mode after learning their existence is drawing to a leisurely, painful close. The Mystics are the counter argument: kindly creatures that move with Zen-like grace and march willingly toward their fate. Characters like astronomer Aughra and stilt-creation The Landstriders reveal their own lovable novelty, but the blockbuster accomplishments of the film are the Gelflings, Jen and Kira, and the exquisiteness of their reactions, inviting a striking level of sympathy for what is essentially a ball of felt with plastic eyes and perfectly coiffed hair.

I supposed what “Dark Crystal” boils down to is a mosaic of bravery. It’s brave of the production to seek out their own legends and invent their own cocktail of spirituality for a small assembly of puppets. It’s brave of the film to demand performers search within themselves to lend invaluable reality to their characters, even if it meant unbearably stifling hours stapled to a partner under layers of wool and rubber. And it’s brave of Henson to submit to his loyal audience a demanding piece of storytelling and visual complexity that’s miles away from Miss Piggy, Fozzie, and our pal Kermit. There’s not a day that goes by where I don’t appreciate this monumental leap of filmmaking faith.

For a film nearing 30 years of age, “Crystal” is able to make the leap to Blu-ray with minimal mistakes. The AVC encoded image (2.35:1 aspect ratio) simply dazzles, easily making the disc the best home entertainment experience the film has ever enjoyed. A picture of obscene detail, the BD seizes the wonder of Henson’s imagination, bringing out the finer points of the frame, even introducing me, a “Crystal” junkie, to new details (I’ve never noticed the thin wires holding up the titular entity before). The image is crisp without losing the film-like qualities of the original elements, allowing the BD to retain a comfortable theatrical appearance, with splendid, deep colors and secure black levels that allow for further frame inspection. There’s little in way of Blu-ray “pop” here, leaving the presentation more about safeguarding the richness and hyper-nuance of the cinematography and overall design work.

The Dolby TrueHD 5.1 mix isn’t a forceful creation that will rattle sound systems, it’s more of a cathedral style of ambiance, building all the elements into a stout presentation of scoring (composer Trevor Jones hits a grand slam with the music), dialogue, and peculiar sound effects. Most sequences maintain appropriate surround atmospherics, with castle interiors offering a pleasing echo effect to underline the ornate architecture. Garthim attack scenes inject some LFE verve to the mix, but most of the energy here is frontal, which feels more natural to the storytelling aesthetics at hand. French and Portuguese Dolby TrueHD and Spanish Dolby Digital tracks are also available.

“The Book of Thra: ‘Dark Crystal’ Collector” is a minimal treasure hunt that allows the viewer a chance to collect tokens that pop up onscreen while watching the movie. Each token contains a bit of “Crystal” trivia on characters or landscapes that can be viewed at any time.

“SkekTek’s Crystal Challenge” is a game that submits “Crystal” trivia questions during the film. Answer them right and you can keep your essence. Answer wrong (or take too long) and SkekTek gladly fills his bottle with your soul, offering it to the Emperor for consumption.

“Picture-in-Picture Storyboard Track” is a fantastic new addition to the “Crystal” world, showcasing early concepts, doodles, and frame designs in a smart presentation, allowing for easy comparison to the final product.

Carried over from earlier DVD (and laserdisc) releases…

For starters, there’s a feature-length audio commentary with conceptual designer and all-around fairy geek Brian Froud. I’d never thought I live to see the day when someone tied to the production that didn’t have the last name of Henson would kick back and reminisce on the making of this exotic film. Thank heavens Froud agreed to the process, and he delivers a sublime track filled with tart bits of production origin tales and feelings on how the whole crazy endeavor turned out.

- Froud designed the whole world of the “Dark Crystal,” from creatures and landscapes to the font of the opening title -- a personal victory he’s still in awe of.

- Froud’s fascination with lobsters during production led to many crustacean touches within the design of the film, including the creation of the Skeksis’ hulking henchmen, the Garthim.

- After a screening for an Albuquerque college crowd in 2006, Froud was shocked to discover many of the students couldn’t understand the concept of using puppets, after spending most of their lives bombarded with CG imagery.

- To avoid a legal complication with Froud’s day job, the Mystics were given an extra set of arms.

- “The Dark Crystal” ate up five years of Froud’s life.

- Stunningly, Froud’s only real objection to the final product comes at the end with the appearance of the urSkeks, which the designer feels missed the complicated ideal he was searching for.

Spanish and Portuguese subtitles are offered for the commentary.

“Reflections of ‘The Dark Crystal’” is a two-part featurette made up of brand-new interviews and special test footage recently unearthed from the Henson archives.

“Light on the Path of Creation” (20:25) is a closer look at the mystical intentions of the film, and how Henson’s limitless imagination led the production to glory. Interviews with Froud, screenwriter David Odell, and performers Kathryn Mullen, Brian Henson, and David Goelz are included, along with that all-important test footage. Primarily short snippets of video-recorded backyard brainstorming, this nugget of “Crystal” history will surely have fans drooling. My favorite moment has to be the reveal of Jen’s early incarnation: a blue Gelfling topped off with a lush mound of Farrah hair. Thank god for the merciless creative process.

“Shard of Illusion” (16:18) delves more into production stories and how the creatures came to life with the help of creative puppeteers. Again, more of the test footage is layered into this featurette, but it isn’t as much as expected. Of specific interest is Odell discussing Hollywood’s boomerang reaction to “Dark Crystal” and the disastrous test process the film suffered through.

“The World of ‘The Dark Crystal’” (57:26) is the definitive take on the making of the film. Make for network TV in 1982, “World” gives the viewer an exhaustive peek at the odds Jim Henson and Frank Oz faced during the difficult production process. This is truly a remarkable document of the film and a treasure worthy of repeated viewings.

A single Deleted Scene (3:50) concerning a funeral for the Skeksis leader is included. It’s a very gothic, troubling sequence better left out of the movie. The scene appears courtesy of a well-worn VHS copy of the work print.

“Original Skeksis Language -- Test Scenes” (22:56 minutes) demonstrates that not every idea on the “Dark Crystal” was a good one. As originally conceived, the Skeksis were intended to speak their own language, which was to be left without subtitles, using body movement and performer articulation to convey meaning. The concept is interesting but the execution is tiring, assuring a late-in-the-game switch to English dialogue was a smart choice. Also included are a few moments with Aughra when she was voiced by Frank Oz. Sounds very Yodaesque, if you ask me. These scenes can be viewed with or without a new introduction from writer David Odell (another BD exclusive).

“The Dark Crystal” is an immaculate creation, and as new generations grow to understand its exquisiteness, the more precious an experience the motion picture has become. I could watch the film a hundred times and still discover new corners that I’ve never noticed before, or sly performance quirks that register differently now than they did when I was a child. The picture is a snowballing creation of pure imagination and remains Jim Henson’s professional crown jewel. Decades later, the film hasn’t lost a step as a crucial fantasy touchstone, and, in a wonderful twist of fate, continues to amaze people of all ages to this day. 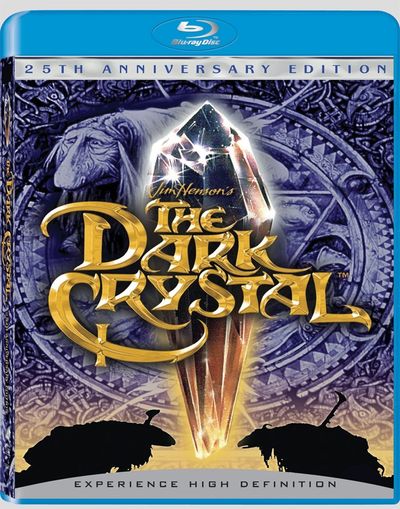