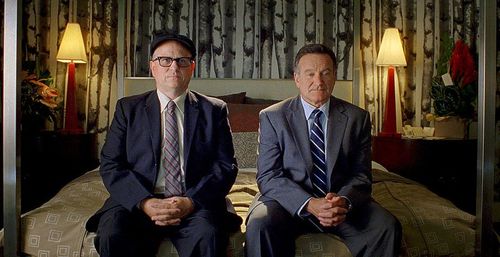 Spending his directorial career in search of the proper script with the proper oddity to fit his established sense of humor, Bobcat Goldthwait has finally captured the secret formula with “World’s Greatest Dad.” A pitch-perfect black comedy, “Dad” drips with the sort of acidic smile that Goldthwait has built a career upon, bravely marching forward as not only one of the most uproarious films of the year, but perhaps the most accurate depiction of teen bile ever to grace the screen. It’s a double miracle: a stupendous comedy and a great argument for mass sterilization.

Lance Clayton (Robin Williams) is a high school teacher of poetry, a failed novelist, and father to teenager Kyle (Daryl Sabara). Feeling the failures of his life smothering his spirit, Lance also must contend with Kyle’s mean-spirited behavior and general smarm, finding the apple of his eye has matured into a loudmouth pervert. When a freak accident befalls Kyle, Lance decides to twist the opportunity to benefit his stalled writing career, drawing sympathy from noncommittal girlfriend Claire (a fantastically game Alexie Gilmore), renewing interest in his classroom teachings, and achieving literary success that makes him a household name. It’s the perfect life, as long as Lance’s conscience can hold out.

“Dad” is the most mature directorial offering from Goldthwait to date, keeping close to his trademarked idiosyncratic ways of sensitivity while sharpening his satiric aim to sniper-level. After directing an alcoholic clown movie (“Shakes the Clown”) and a bestiality romantic comedy (“Sleeping Dogs Lie”), “Dad” muffles Goldthwait’s button pushing ways, rechanneling his mischievous side to service a softly executed story of fraud and remorse. The film is a laugh riot for the duration of its running time, but Goldthwait filters his targets more succinctly with this picture, showcasing alternating ripples of restraint and farce that impart the material with an unpredictable plan of attack, thus accentuating the wicked turns of the plot.

Assuming a "Heathers” tone of darkly comic fearlessness, “Dad” gets away with some rather acerbic material. The character of Kyle is the centerpiece of “Dad,” a high school outcast with an outstandingly vulgar mind that he freely shares with the outside world. Kyle is a bastard, and better yet, a teenaged bastard, bellowing insults with a monotone attitude and tattooed cynicism. He’s also a fan of dangerous masturbatory practices, which becomes a major concern for both the movie and for Lance, who watches as his one and only boy curdles into a disgusting monster he’s unable to fully dismiss due to parental contract. Fighting a stealthy relationship with a co-worker, his own artistic insecurity, and now his beloved child, Goldthwait ingeniously backs Lance into a terrifying corner. How the script emerges from this pickle is a place of extreme spoiler territory and delicious screen surprise. However, it must be noted that Goldthwait achieves a winning tonal equilibrium early on, and nothing in the script seems to knock him off balance. 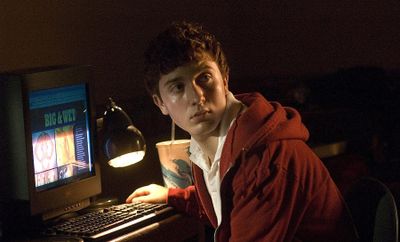 As the conductor of this bizarre train to pure immorality, Robin Williams contributes his finest performance in quite some time. As the withered Lance, Williams locates flawless shades of distress and resignation with his soured life and times, hitting confident notes of jealously as the character begins to unravel in sudden ways. Backing him perfectly is Sabara, stomping around the picture as Kyle, the Godzilla of teen mockery nightmares. It’s a brutal performance that taps directly into every parental fear of adolescent development gone awry, forming this moaning, wicked personality who only bothers to rise in the morning to service his own vile desires. Sabara has the strut and spittle down pat, and his moments of torment are hilarious to behold, that is when they didn’t have me Google searching nearby vasectomy doctors.

“World’s Greatest Dad” is a cutting, sinful gem, sending up the self-help culture of celebrity with pinpoint accuracy while spreading its own domestic diseases and inadvertent warnings on passive parenting. It’s a modest production of limited coin, but that never slows its imagination and thirst for discomfort. If this is the Bobcat Goldthwait career turning point, I cheer the arrival of an imaginative filmmaker capable of spinning the mundane humiliations of life into splendid fodder for a fantastic, chilling comedy. 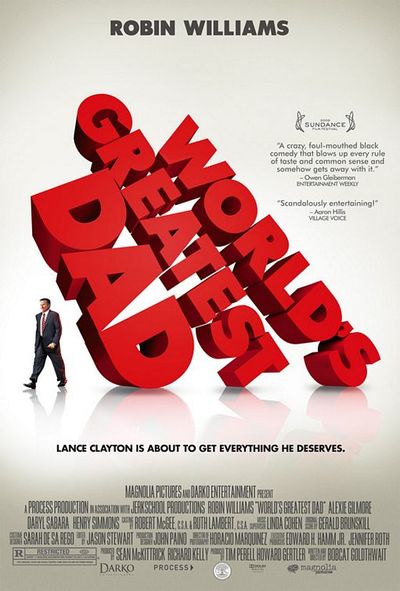 Meh, I dunno. Anything with Robin Williams in it these days turns me off a bit. I used to like the guy, but nowadays...I just don't know.