I’ve never been the most diligent student of Japanese animator Hayao Miyazaki, unfortunately sticking mainly to the features that have booked passage to America, dubbed and redressed by the fine folks at Disney. “Ponyo” is the latest import to hit these shores and for a Miyazaki lightweight like myself, it’s perhaps the most charming production I’ve encountered yet. Heartwarming, graciously surreal, and pure eye candy, “Ponyo” is an elevating fantasy that swims enthusiastically in delightfully unexpected directions.

Ponyo is a goldfish curious about humankind. Sneaking away from her underwater kingdom, and the watchful eye of her sorcerer father Fujimoto, Ponyo heads to the surface of the ocean, falling into the arms of a young boy named Sosuke. Bonding over a love of ham, Ponyo and Sosuke become quick friends. While Fujimoto searches high and low for Ponyo, the young fish wills herself into human form, understanding that to remain flesh and blood, she must find love with Sosuke and approval from his mother, Lisa. When a supernatural tsunami, brought on by Ponyo’s second escape from Fujimoto, floods the community, it’s up to the two kids to find Sosuke’s missing mother before Ponyo’s enigmatic magic runs out.

A release from the illustrious Studio Ghibli, “Ponyo” doesn’t stray far from the company’s traditional animated offerings. Bathed in opulent fantasy touches (riffing off Hans Christian Andersen’s “The Little Mermaid”), adorable infantile behavior, and a strict adherence to magical character development, “Ponyo” is quite comfortable playing to Miyazaki’s strengths as a Spielbergian master of fantasy, helping to polish his badge as the finest traditional animator working today, and perhaps of all time.

Of course, narrative coherence isn’t exactly what Miyazaki is known for, leaving “Ponyo” to impress primarily in the visual department while the story burps forward, often jarringly. Working with a magnificently colored aquatic scheme, Miyazaki crafts a splendid realm of creatures, sea goddesses, and tidal fortunes, with striking underwater vistas crowded with forbidding depths and peaceful observers. The marvelous detail of the animation goes without saying at this point, but Miyazaki’s steady, mischievous hand never fails to amaze. He’s crafted an eye-popping universe that manages to satisfy fantasy necessity and cartoon expression, especially in the Ponyo character -- a cherubic thing that morphs between childlike features and a weird chickenesque creature when magic must be summoned.

“Ponyo” breathes shallow in the drama department, working better as a trek film than a marine mystery. That’s not necessarily a criticism, since the movie has much to digest from the craftsmanship alone, making for a supremely satisfying picture with minimal narrative moves. “Ponyo” is not my introductory Miyazaki film, but it’s the first one I’ve enjoyed an enthusiastic appreciation for. This is a picturesque, elementary animated feature that might require a little extra effort from family audiences to seek out. Believe me, the effort is worth the hassle. 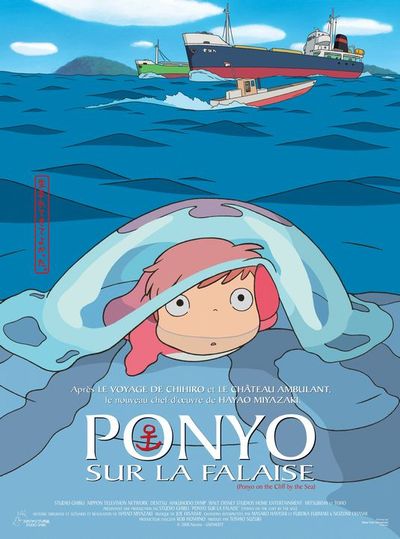