“Julie & Julia” is a heavenly foodie playground, filled with gorgeous photography that captures every last dripping ounce of gourmet delights, anchored by a type of lascivious attention to detail that would make Bob Chinn blush. It’s a dream to behold, and the story’s not too shabby either. Carefully orchestrated to subvert expectation at all the right moments, “Julie & Julia” surprises as much as it delights, bringing writer/director Nora Ephron to a new level of storytelling subtlety once completely alien to her, pulling together a parallel lives tale that explores the thrill of creation and the agony of approval.

In 2002, Julie Powell (Amy Adams), fed up with her inactive imagination, decided to establish a blog where she would spend a year burning through the 536 recipes found in Julia Child’s landmark cookbook, “Mastering the Art of French Cooking.” Putting her marriage to husband Eric (Chris Messina) at risk, Julie took on the impossible task of endless food preparation, documenting her adventures every single night. Back in the late 1940s, Julia Child (Meryl Streep) also grew tired of apathy, eager to stretch her creativity through the culinary arts. Through trial and error, boosted by love and support from her husband Paul (Stanley Tucci), Child fought to preserve her vision for a phone-book-thick cookbook that would come to define her legacy as one of the most gifted, influential, and charismatic chefs of the 20th century. 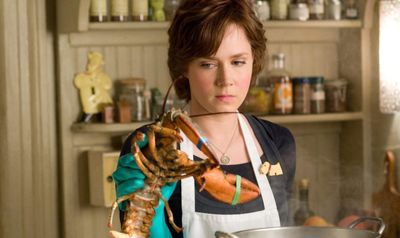 Divided right down the middle, “Julie & Julia” presents a hulking narrative obstacle for Ephron, who pulled the screenplay together from Powell’s book on her kitchen adventures and Child’s 2006 autobiography. Questing to blend two personal tales of creative explosion, Ephron maps out a careful plan of attack, making time for each side of the coin as Julie and Julia develop from cooking novices to empowered women with much to communicate to the outside world. After a career making glorified sitcoms, Ephron switches gears a bit with this feature film. Sure, the movie still tends to all the insider New York City jokes and insufferable harping mother clichés, but beneath the approachable, common exterior lies pure artistic perspective for the filmmaker, newly interested in the small triumphs of life.

Following both women as they face the trials and tribulations of kitchen warfare, Ephron maintains a thick mass-audience mood that’s anticipated and fairly successful. However, underneath the stovetop slapstick and Child’s flighty demeanor is a picture enthusiastic to treat Powell with a degree of fussbudget realism, underlining her thirst for success and her routine bouts of psychological defeat. Adams has a thankless role, but she manages to keep Powell away from a hapless shrew stereotype, infusing the character with a raw sense of defiance and a radiance brought on by her culinary education. Powell is never elevated to sainthood and the restraint is enticing: the woman who wrote and directed “You’ve Got Mail” is actually putting a somewhat unlikable character on the screen. Powell is complex, narcissistic, and forever doubtful, and the film is respectful of her faults, keeping her reactions outside of the routine, especially in the final act, where Julie learns of Julia’s reaction to the blog. It’s a powerful and poignant moment of acknowledgment for Powell, and the combined efforts of Adams and Ephron preserve a bewitching gray area of blind faith.

And what to make of Meryl Streep. Heavens, she literally can do no wrong, filling “Julie & Julia” with a volume of performance that few, if anyone, could pull off as gracefully. Streep’s Child is a loveable bear hug of a woman, enthusiastic about her gastronomic pursuits to a point of explosion. Streep goes broad here, Benny Hill broad, but the acting retains spectacular dimension, communicating Child as both a dreamer and a fighter, using her chirpy voice and swirling body language to disarm her foes, providing a social distance she only allowed her beloved Paul to penetrate. This is no caricature, but a living articulation of beaming ambition. Streep and Ephron turn Child into a radical, a lover (the film is not shy bridging the art of cooking to the joy of sex), and an artist. A human being with discontent and victory coursing through her veins. I suppose it goes without saying that Streep captures every shade of response here, but once again I marvel over this actress and her infinite ability to make anything handed to her shine with supernova intensity. 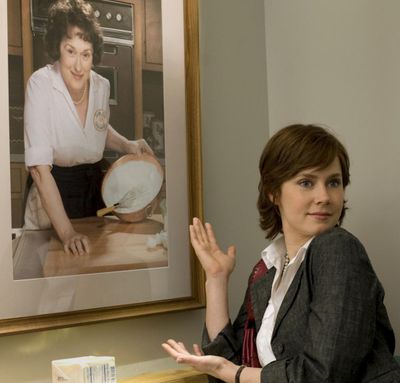 Charting the chefs’ struggles to work through hardships of the creative and personal kind, “Julie & Julia” isn’t concerned with concluding the film on a literal note of connection, preferring to stand aside and let the two characters bond through a shared spiritual experience. While stuffed with its fair share of transparent maneuvers to keep the audience invested, the film lingers long after it ends, due in part to the enchanting bittersweet qualities that line the edges of the screenplay and the performances.

And finally, I’ll leave you with this thought: in a modern cinematic landscape that encourages female-minded entertainment to pursue only toxic concerns of haute couture and the eternal shame of the single life, here’s “Julie & Julia,” which showcases stable, loving relationships (complete with supportive men), offers honest depictions of self-worth, and imparts a message of feminine achievement through the art of divine creation. Now how about that. 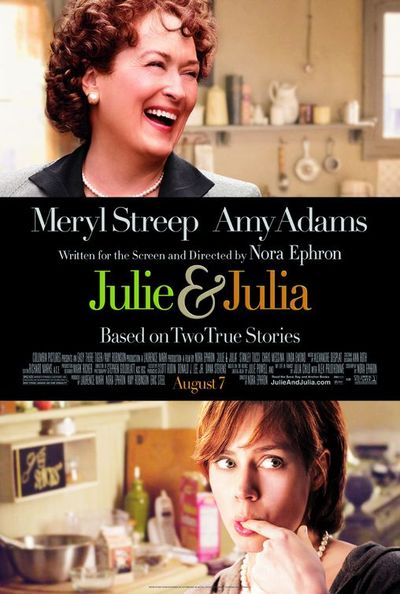