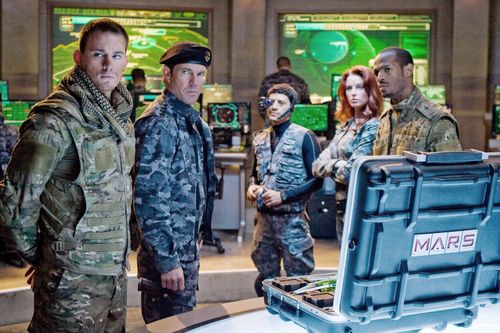 Controversy has followed “G.I. Joe: The Rise of Cobra” ever since the film sprinted into production early last year amid writer strike restrictions, with fans feverishly voicing their objections to the director, the fetish-wear costume design, and character arc alterations. The buzz was so toxic on this feature, Paramount fearfully withheld the film from press screenings to preserve whatever goodwill was left to profit from. It’s not been an easy journey for “Joe,” but the toy-inspired film is finally ready to show, and to be perfectly frank, Paramount was smart to hold the picture until the last possible minute.

Reclaiming a state-of-the-art weapon that allows microscopic nano-technology to eat away anything in its path, arms dealer McCullen (Christopher Eccleston) has taken his prize to Cobra, an evil organization bent on controlling the world. Alongside members Storm Shadow (Byung-hun Lee), The Doctor (Joseph Gordon-Levitt, embarrassing himself), and Baroness (Sienna Miller), McCullen sets out to prove Cobra’s might, attacking landmarks and terrorizing the public. Coming to the rescue is G.I. Joe and its team of highly trained soldiers, led by General Hawk (Dennis Quaid). A secret global organization created for defense, the Joe squad welcomes new members Duke (Channing Tatum) and Ripcord (Marlon Wayans) to their ranks, joining the likes of Scarlett (Rachael Nichols, enjoying herself) and silent ninja Snake Eyes (Ray Park). Setting out to spoil Cobra’s scheme, the Joes find a powerful enemy that will stop at nothing to control the world, forcing Duke to confront his personal demons and lead the heroes to victory.

When “Transformers” hit unreal box office highs during the summer of 2007, it was only a matter of time before Hollywood would try to recreate it, mining the 1980’s toy line gold rush further, settling on the “G.I. Joe: A Real American Hero” plastic dynasty. Well, the whole “American Hero” label has been carefully peeled off the packaging, but “Rise of Cobra” salvages the rest of the inflated ingredients, setting up a cartoon tale of ornately costumed good vs. evil, battling each other with outrageous weaponry, crude one-liners, and slick vehicles of all shapes and sizes. Director Stephen Sommers is no stranger to these animated demands, having directed “Van Helsing” and two installments of “The Mummy.” In a weird way, Sommers is perfect for the “Joe” job, having cut his teeth on boisterous, deafening entertainment for teen boys.

While Sommers can conjure up action figure caricatures with one hand tied behind his back, the man has never revealed any ability to direct a feature film. “Joe” is the latest bloated float in Sommers’s sad parade of cinematic shame. Ordered to make something loud, dumb, and fun, Sommers only manages two of the three mandates, going overboard trying to sell the whimsy of the product, but leaning too long on the smother button. Action sequences (and the film is wall-to-wall mayhem) are a blur of edits and movement, following the Joes as they spring into battle. It’s a hyperactive aesthetic that kills the merriment; Sommers almost appears to be going out of his way to fudge spatial relationships. The toy line was all about appearances and the careful study of machinery, welcoming close inspection. The feature film maintains a furious pace, turning a whirlwind, globetrotting tale of greenscreen war into a needless and repetitive sensory assault. Rapid fire is the director’s crutch, and one would think that for a universe as vivid as “G.I. Joe,” he could’ve taken a little more time and effort to bask in the glow of the exhaustive mythology that was built on the backs of a million allowances. I think the fans deserve better than this guy. 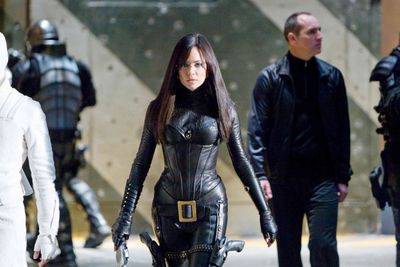 In-jokes (yes, the line “And knowing is half the battle” is uttered) and character winks pepper “Joe,” along with purposefully exaggerated special effects that result in at least one marvelous sequence (a Parisian assault with the Joes in turbo suits). Sienna Miller also adds some needed sparkle as the slinky, warm-blooded Baroness, while Dennis Quaid goes to town on a John Wayne impression for Hawk. The film needed more of these fine actors and less of Marlon Wayans (for obvious reasons) and Channing Tatum, who reduces Duke to a vague, dim Vanilla Ice presence -- in a film that requires nothing from the cast outside of the ability to maintain a strict diet, Tatum can barely spit out his dialogue.

The franchise pawns are all in place by the close of “Joe,” and Cobra does indeed rise, as will sequels. Ditch Sommers, recast Duke, and spend some of that budget on decent CG work, and there could be something special in store for future big screen “Joe” adventures. Keep Sommers around and all “G.I. Joe” is going to be is a glorified Cannon Films production with a nasty case of ADD.

Hey Brian, great review. I saw the film at midnight last night (so I could write my own review) and I ended up feeling the same way. The action NEVER stopped. I thought Transformers was crazy, but this topped even that. The plot reminded me more of Team America and Top Gun than anything else. I think I said this in my review, but it would make for a great video game or 2 hour CGI effects show. What it doesn't seem to be able to pull off is a real story.

What did you think of Joseph Gordon-Levitt? Though he was campy, I was entertained by his out of the box performance. It's a different role for him.

Is it just me, or are a lot of people labeling this movie as "good" merely because it's not as horrible as the trailer implied?

Most of the movie was good, but it did have some ugly parts. I thought the characters were not very well defined, esp( cobra commander and Destro).

The stupid bionic suits i could have really lived without.

best character of the film was snake eyes and cobra's ninja. If it wasn't for them, this movie would have really suck donkey balls