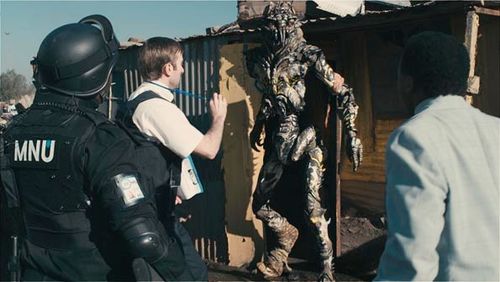 An electric brew of “Alien Nation” and “The Fly,” coated with a viscous layer of social commentary, “District 9” is a volatile action/horror picture with a stupendous visual fingerprint. A barnstorming combat film with flashy weaponry, alien mysteries, and goopy body trauma, the film is destined to become a cult classic -- a largely unapologetic statement of hysteria, flanked by large deposits of geek Spanish fly. However, while there’s astounding visual reach, “District 9” is riddled with inconsistencies and a confusing point of view, reducing the heat on this ambitious film, robbing it of a lasting power it should rightfully own.

20 years ago, a massive alien mothership appeared above Johannesburg, South Africa. Inside was a race of dying creatures, soon brought down to Earth by local government and forced to live in a walled off section of the city, dubbed District 9. As the aliens, nicknamed “Prawns” due to their vaguely crustacean appearance, grow in numbers and hostility, the task of relocation to a concentration camp has been handed to the Multi-National United Corporation and its head field operative, Wikus (Sharlto Copley). Entering the vile shantytown, teams of soldiers find the Prawns concocting a secretive plan of attack, with Wikus coming into contact with a mysterious black liquid. Forced to flee when he learns his superiors want to tear him apart for examination, Wikus heads back to District 9, befriending an intelligent Prawn named Christopher.

Based loosely on the events of District Six that occurred in South Africa in the 1970s, “District 9” collects bits of history, sci-fi, and action to build itself a story of man hating alien. An unusual visitation tale, the film seeks to reimagine the ravages of apartheid with an otherworldly angle, positioning the Prawns as the abused culture, separated from the general public, finding their rights refused in the name of governmental protection and handed a war zone for a home. The political and social overtones of “District 9” are straightforward and vividly distributed, integrated cleverly by director/co-screenwriter Neill Blomkamp, who conjures a horrific atmosphere of violence and humiliation as man finds renewed purpose keeping the Prawns at bay. 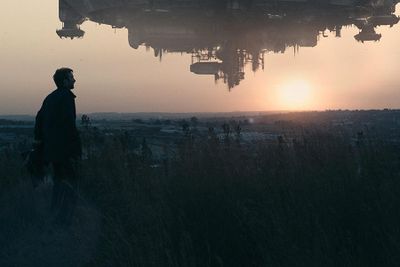 How this story is captured is where my head starts to spin. Introduced as a documentary, “District 9” is ostensibly telling the story of Wikus and his company man efforts to get the Prawns to their new, vaguely threatening home. Blomkamp arranges faux news footage of the District’s violence and community filth, while “interviewing” Wikus’s closest associates and superiors. Following the action into the District as Wikus and the soldiers go from door to door to con the residents, the film finds an incredible stride of intrigue and discovery, with Blomkamp parading around some of the finest special effects work of the year to merge the real and the unreal into a singularly disturbing, unsettling event.

The feature soon rudely breaks away from the factual perspective, morphing into direct fiction, as Wikus’s accident with the black goo becomes a living nightmare. From there, Blomkamp juggles back and forth between shaky-cam documentary footage and traditional dramatics. It’s a hazy perspective that cheats the film out of a compelling identity, making the intention of the footage confusing -- a needless distraction in the middle of overwhelmingly grungy eye candy. Is this a documentary? A dramatization? Blomkamp doesn’t answer the questions, leaving various plot-holes behind as he starts to scratch his geek itches.

Adapted from Blomkamp’s short film “Alive in Joberg,” “District 9” doesn’t feel like it was sufficiently inflated to fill a feature-length running time; instead, Blomkamp spackles the cracks in the story with explosions and the grisly wonders of alien machinery, taking an already violent film to the extreme for the final showdown. Bodies are torn apart, Blomkamp’s “Aliens” fixation is satisfied, and bullets of every design zip around the frame. Perhaps a majority of the audience won’t mind the way “District 9” hops on one foot, as long as the pyrotechnics display is appropriately blinding and the creatures are cool. And they are. Wonderfully so. Blomkamp is a filmmaker to watch, with absurdly precise visual instincts. But “District 9” is his first film and it shows, bloating a fascinating fable to a point of collapse. 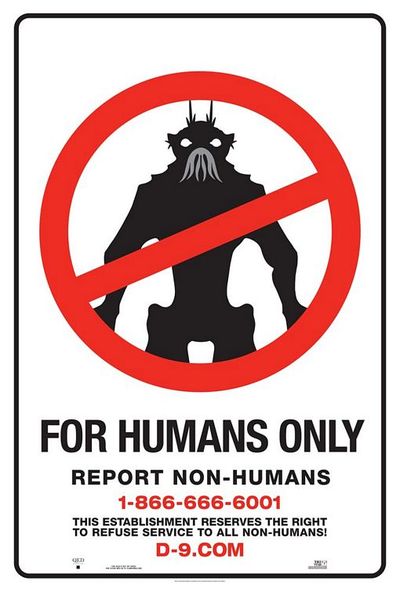