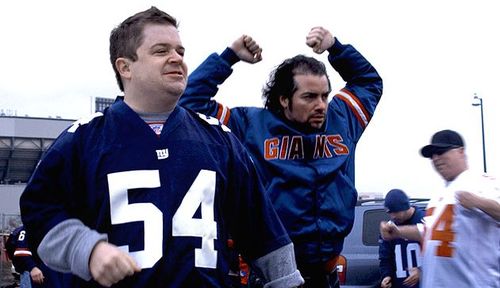 “Big Fan” is being pushed to audiences as the sizzling dramatic debut for comedian Patton Oswalt, lovable cherubic star of “The King of Queens” and the voice of Remy in “Ratatouille.” While a forceful piece of acting sure to widen Oswalt’s horizons, “Big Fan” also strikes a devilish, queasy tone worth savoring. It’s a wicked play on professional sports and its professional, dogmatic appreciators. While shackled by a paltry budget, “Big Fan” manages to slip under the skin and play cleverly with topical issues of misguided moral fiber.

A 36-year-old man living at home with his mother and stuck in a parking garage job, Paul (Patton Oswalt) finds his only release in life is the weekly drama of the New York Giants. Following the team and its star linebacker Quantrell Bishop (Jonathan Hamm) obsessively, Paul and his pal Sal (Kevin Corrigan) spend their free time watching games from the Giants Stadium parking lot and interacting boisterously with local radio shows. When Paul happens upon Quantrell and his entourage late one night, the star struck schlub makes a move to meet his hero, only to be promptly beaten into a coma for his efforts. Faced with an opportunity to cash in on the tragedy, Paul remains disturbingly silent, forced to choose between a huge financial reward and the prospect of his beloved Giants playing the remainder of the season without Quantrell.

Writer/Director Robert D. Siegel accomplishes very much with very little in “Big Fan.” A meditation on athlete idolatry and the most dangerous game of fame (and infamy), Siegel scripts an intimate story of psychosis using the clever guise of a football fanatic. These are the background types one spies everywhere, especially on television and radio, raucously cheering on their favorite team in a manner that perhaps fills an emotional need not being met at home. Siegel (who scripted “The Wrestler”) taps into that loneliness, envisioning Paul as a sad sack character who only jolts alive when discussing the Giants, fending off his invasive mother, achieving siblings, and his own pitiable awareness of self-worth to support the team. 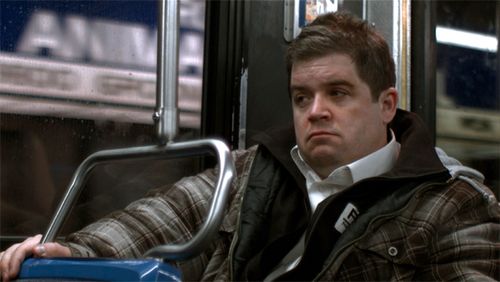 Siegel enjoys a splendid game of details with “Big Fan” because, let’s be honest here, he didn’t have much money to work with. It’s a modest picture, forcing the filmmaking to turn the “Taxi Driver” inclinations inward, staying tight on Paul and his world of NFL elation, carefully rehearsed and scripted in his trusty notebook -- for Paul to find humiliation during his radio call-in spotlights would be a fate worse than death. Siegel captures that throb of delight within the character as he partakes in tailgating festivities and boasting about future Giants victories, sleeping (and masturbating) underneath a colorful Quantrell poster. Cinematographer Michael Simmonds shoots striking images, but Siegel can’t always cover his lack of production coin. The bits of character business pick up the slack, intensifying Paul’s mania without pushing the drama over the edge.

The restraint of “Big Fan” might be its greatest weakness, especially to those expecting a picture of constant escalation. Siegel stays grounded with Paul, extracting tension from the character’s lunacy as he elects to remain a mute witness to his own beating just so his idol can play football. It’s a terrifying streak of loyalty, beautifully captured by Oswalt in a brave performance that never winks at the audience. Oswalt gives the role his all, burrowing into Paul’s slob tendencies, stubbornness, and eventual orgasmic rush of empowerment as he imagines control of the Giants’ gridiron future. It’s marvelous to see Oswalt stretch like this. The man is a brilliant comedian, but his dramatic side reveals captivating dimension. Oswalt’s little touches, such as the acidic burn of Philadelphia Eagles colors on his skin, are inspired, feeling out Paul’s brittle edges further.

“Big Fan” has several surprises to keep the tension at a suitable boil, but it’s the dementia that makes it all riveting. It’s never how far will Paul will go, but why he’ll go that pulls the noose tighter, manufacturing premium moments of discomfort that soon snowball into haunting catharsis. It’s not the most polished feature film around, but the rough edges suit “Big Fan” well, making for a fragrant depiction of pro sports appreciation slowly asphyxiated to a gasp of inconsolable delirium. In other words, don’t mess with a Giants fan. 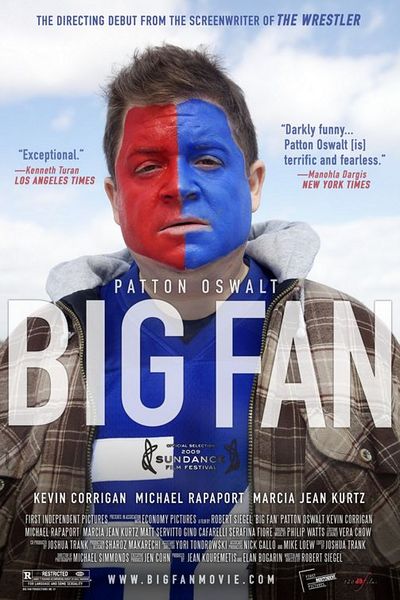