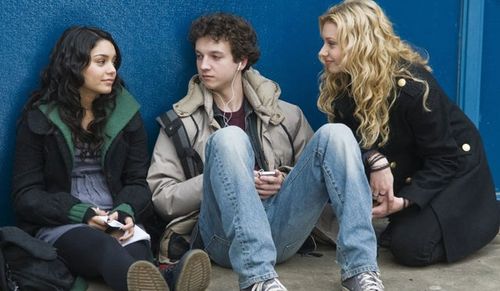 As charming and energetic as “Bandslam” is capable of becoming, the feature is restrained by director Todd Graff, or perhaps the better description is smothered. Graff, who covered teen ambition in the semi-musical, mostly awful “Camp,” takes on the subject again with “Bandslam,” and while the results are more pleasurable and his directorial hand improved, there’s still oodles of melodramatic itches within Graf that he should exorcise. There’s a great movie somewhere in “Bandslam,” but Graff won’t allow its natural vitality to take flight.

Relocating to New Jersey with his mother (Lisa Kudrow), teenager Will (Gaelan Connell) is reluctant to make friends, especially with his polarizing knowledge of music. Will finds a kindred spirit in Sam (Vanessa Hudgens), a no-nonsense outsider who finds Will’s awkwardness endearing. Also taking Will’s fancy is former cheerleader Charlotte (Alyson Michalka), who employs Will’s musical scope to help her group out on the eve of a crucial battle of the bands contest. Will, finding purpose for the first time, shapes the collection of wannabe music stars into a powerful rock unit, forging a friendship with Charlotte that confuses Sam.

For the first hour, “Bandslam” is an endearingly nerdy, spirited creation that places a great deal of trust in its actors and the overall sense of musical superiority. While the soundtrack is filled out by numerous heavily banged, tuneless bands-of-the-moment, Graff demands Will’s musical knowledge lend the sound of the film a personality, including cuts by the Velvet Underground and a fixation on David Bowie to hip up the script. It’s a welcome touch of respect that infuses “Bandslam” with the right rock revolution antidote to the typical teen commotion of broken hearts, busted dreams, and adolescent bewilderment. Graff (who wrote the script with Josh A. Cagan) shakes “Bandslam” broadly to communicate a world of idolmaking for Will, along with a developing sense of romance with Sam, and while certainly clunky, the film has an ingratiating passion that hums agreeably.

Again, the highlights only last for an hour, with most of the joy keeping to Will’s direction of Charlotte’s band and his initiation to the game of love. Once Graff has exhausted the emotional upswing, “Bandslam” transforms into an insufferable spray of melodramatics. The screenplay bends over backward to create conflict from Will, but does so by aping a thousand teen films, including the introduction of a bully character who competes for Charlotte’s heart while seeking to destroy Will by exposing his hypersensitive past. A few other turns of the script are as nauseatingly artificial, shoving “Bandslam” out of the realm of the real, welcoming confusing behavior and plot twists, erasing whatever goodwill the first act was able to construct. Graff pulled this Crayola nonsense with “Camp” as well, and his addiction to contrived complication is excruciating.

“Bandslam” enters the screen proudly and exits bloodied, battered, and crawling on all fours. Graff hopes to salvage the energy with a Thin White Duke cameo and a blue sky ending, but it feels like three years to get to a point of resolution. “Bandslam” should take the lead of the rock gods: keep it moving, keep it simple, and know when to get off the stage. 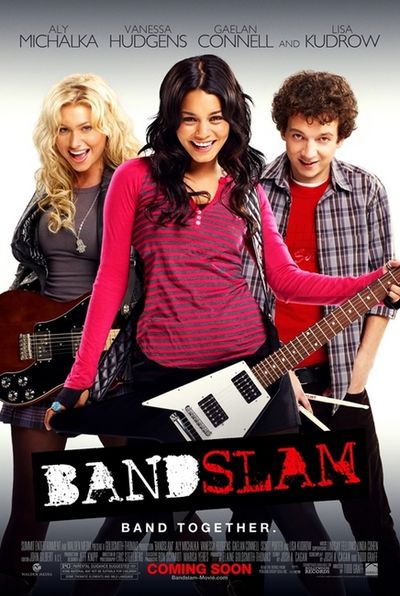