Perhaps one of the lesser known features from the summer blockbuster class of 1984, “The Last Starfighter” has developed a devoted cult following over the last 25 years. A handsome sci-fi adventure with an enchanting pioneer spirit, “Starfighter” is one of the few successful Spielberg clones, administering the usual routine of aliens and mouth-agape wonder with friendly determination and a perfect, just perfect, game boy screenwriting hook.

Living in an isolated trailer park with his mother and kid brother, Alex Rogan (Lance Guest) is looking forward to college, where he can get away from the staleness of his life, trying to coax girlfriend Maggie (Catherine Mary Stewart) to join him. Passing time playing a “Starfighter” arcade game, Alex manages to achieve an all-time top score one special night, which brings an intergalactic military recruiter named Centauri (Robert Preston, in his final role) to Earth. Taking Alex to the planet Rylos, Centauri informs the bewildered boy that his gaming skills are needed to protect a peaceful universe from the dastardly plans of the evil Xur (Norman Snow) and the Ko-Dan Armada. At first resistant, Alex soon agrees to join the fight, teamed up with navigator Grig (Dan O’Herlihy) and sent off in his very own “Gunstar” ship to save the universe.

Shoved into a marketplace populated with the likes of “Gremlins,” “Indiana Jones and the Temple of Doom,” and “Ghostbusters,” it’s no wonder “Starfighter” failed to rack up sizable numbers at the box office. Here was a mellow sci-fi extravaganza that resembled a Saturday morning cartoon, preserving a sappy coming-of-age atmosphere. It didn’t stand a chance against the razor-wire competition.

That gentle accessibility is what makes “Starfighter” the charmer it is. Unapologetically crunching Spielberg pills, director Nick Castle aims to create an epic journey-of-the-hero arc for Alex, using broad strokes from screenwriter Jonathan R. Betuel to pick the audience up in one big swoop of faraway dreams and interstellar combat. What separates “Starfighter” from hundreds of similar space operas is its commitment to character. Castle doesn’t hurry the film in the least, lingering on Alex as he processes his dead-end life and slowly fading opportunities for the future. Of course, this does keep the film from a roller coaster tone of blasting lasers and kooky creatures, but the care pays off by the finale, offering an authentic emotional jolt that Castle nurtures with unexpected panache, assisted by Craig Safan’s wonderfully jubilant score.

While holding tight to compassionate characterizations, “Starfighter” eventually does journey beyond the stars, though it takes nearly an hour to get Alex into a Gunstar -- an eternity in today’s industry. Here, Castle prizes the formation of cartoon villainy with Xur, but his heart remains with Centauri and Grig, played with divine old-Hollywood pluck by Preston and O’Herlihy. These guys are the impish personality of the piece, since Guest is only allowed to portray resentment and astonishment (and does it well). The pros steal the film. I especially enjoyed the interaction between Grig and Alex as they march into battle, soon becoming the galaxy’s only hope, armed with cleverness, courage, and this curious endgame weapon known as the “Death Blossom.”

Castle encounters “‘Rocketeer’ Syndrome” with the intergalactic material of “Starfighter,” spending too much time setting up the conflict and not enough paying it off. Alex only receives a few choice moments in the Gunstar, with a promise made at the end to continue the adventure in future sequels. That promise was not kept, and while endearingly patient, “Starfighter” could’ve used some more starfightin’ to fill the senses.

Of course, no discussion of “Starfighter” is complete without mentioning the special effects. Employing a groundbreaking use of CGI to create the fantastical fringes, machinery, and communities of the film, “Starfighter” immediatley scores nostalgia points with its buffet of rudimentary effects; certainly stiff, but smooth, ambitious work that provides “Starfighter” with an intriguing visual identity and Hollywood history appeal. It seems silly to knock the picture today for its yesteryear design, especially when “Starfighter” was working so diligently to push the envelope back in 1984. Sure, younger audiences might stare at the movie in complete disbelief, but I think those who appreciate the birth of an industry movement can still enjoy the effects for what they were mean to do at the time: amaze and baffle. Mission accomplished.

It is with great sadness to report that the VC-1 encoded presentation (2.40:1 aspect ratio) on the “Starfighter” BD is a mess. Crippled by significant DNR and contrast issues, “Starfighter” retains almost none of the original detail found in the cinematography. While the film was shot with an eye toward softness, the image quality on the BD is a murky, ugly disappointment, with alarming black levels and middling color reproduction. Brightly lit sequences on Rylos tend to fare the best, but that’s only a small fraction of the story. Clearly this is one film that needs a freshening up.

Equally as disappointing is the DTS HD 5.1 sound mix. Surround activity is plentiful during Gunstar combat sequences, but the rest is tepidly front-minded, flat, and tinny. The mix takes some of the firepower out of the sound design and Safan’s score. Dialogue is crisp and well preserved, but the lack of depth, of needed rumble, is disconcerting.

“Heroes of the Screen” (24:19, 1080p) is an all-new featurette created for the Blu-ray release. Hurriedly retracing the history of the production, the mini-doc sits down with many of the cast (including Lance Guest and Catherine Mary Stuart) and crew to learn how the film came to be. Honest, lighthearted, and affectionate, the conversation reveals a tone of respect among the professionals. Everyone seems proud of the picture and grateful for the opportunity to entertain. Talk of the late Robert Preston is a highlight. The downside? The information here is not new, leaving the featurette with more of an appreciative yearbook quality, seeing face 10 years older than the last time they met up for a home video retrospective.

Ported over from the 1999 DVD release…

A feature-length audio commentary with director Nick Castle and production designer/guru Ron Cobb is a good quality discussion of “Starfighter” history and intent. Delightfully conversational, Castle and Cobb dig into their concerns and triumphs with the picture, talking up casting, Spielberg/Lucas overtones, CGI developments and headaches, and the lasting appreciation for the film. Castle makes for a good moderator, prodding Cobb with questions and encouraging his enthusiasm. It’s a fine track.

“Crossing the Frontier: Making ‘The Last Starfighter’” (32:03, 480p) is the second of two making-of featurettes on the BD, and easily the better collection of insight, stories, and BTS footage. Unfortunately, it covers the exact same ground as the “Heroes of the Screen” offering, only lacking a proper HD presentation to make it the final word on the struggle to put “Starfighter” on the screen. It’s nice of Universal to include this, and while it doesn’t have the modern sheen of the BD exclusive, it’s a slicker, more detailed snapshot of production history.

Galleries of on-set photographs are presented, including a series of stills from an alternate ending to the film.

The film’s Teaser Trailer and Theatrical Trailer (both 480p) are included.

The only element missing from “Starfighter” is a true concentration on Alex’s adventures on Rylos and inside the Gunstar. A subplot with Alex’s robotic surrogate Beta (sent to fill in for the hero while he battles beyond the stars) is intended to bring some levity to the film, but it only provides an unwanted, unfunny distraction. Still, while muted to a certain extent and consciously family friendly, the feature is dependable ‘80’s escapism. Bighearted and unhurried, it doesn’t kick down doors, but “The Last Starfighter” makes for a pleasant 100 minutes that should’ve rightfully gone on to a few explosive sequels.

And always remember, may the luck of the Seven Pillars of Gulu be with you at all times. 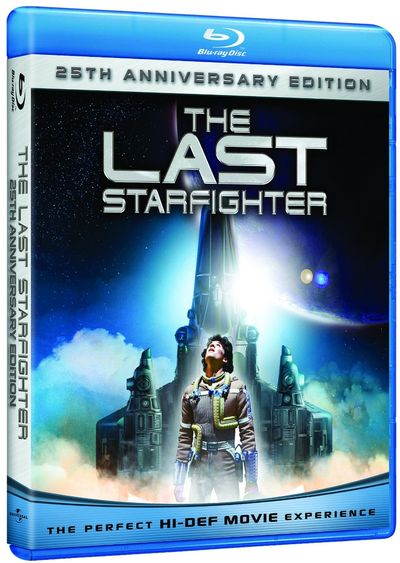