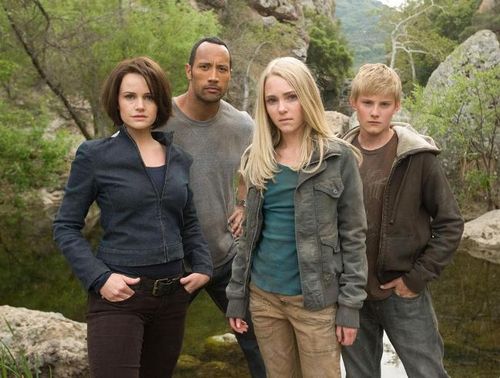 Crash landing on Earth, alien siblings Sara (AnnaSophia Robb) and Seth (Alexander Ludwig) are desperate to retrieve a device their planet needs to survive. To reach their ultimate destination of Witch Mountain, the pair enlists the help of Las Vegas cab driver Jack Bruno (Dwayne Johnson), who’s trying to avoid any trouble that would land him back in prison. With Department of Defense goons (led blandly by Ciaran Hinds) and an interstellar bounty hunter nipping at their heels, Jack becomes protective of his extraterrestrial charges and fights for their safety, eventually seeking assistance from discredited astrophysicist Dr. Alex Friedman (Carla Gugino, fighting an awful wig) to help him return the teens home safely.

“Race to Witch Mountain” has little in common with its even-tempered, low-budget forefathers. The new film is made with the Playstation generation in mind, as director Andy Fickman (“The Game Plan”) lays down colorful lights and CG tweaks to lavishly ornament the world before he promptly destroys it all. “Race” is an action film at its core, valuing the beauty of mayhem over the anchor of character composition. The plot is spelled out in minimal detail, only there to provide a motive for the stunts, while the rest of the picture is in a constant state of alert, ready to take the audience on a wild ride as Sara and Seth battle their way back to their spaceship.

The newfound pacing is certainly not a bad thing, giving the material a needed kick in the pants when the script stops needlessly to smell the plastic flowers. Fickman masterminds a thrill ride atmosphere for “Race” that keeps the film free from overt boredom, preferring the characters endure constant movement on freeways, casino floors, and around the titular mountain to lure the viewer in. This vigor sacrifices any emotional content, and the absence of heart reverberates throughout the movie.

Unfortunately, most of the holes set aside for sentiment are replaced by comedy, with Johnson the vessel for scripted and unscripted spit-takes that lack spice; he is consistently dropping the ball with his feeble reactions to mass hysteria. “Race” is more a film you want to laugh with than actually do, cruelly leaving wide open spaces for the cast to land a gut-buster or two, only to see everyone fumble their shot. With spirited performances all around, it’s not for lack of trying. It’s just impossible to believe that with this much effort on display, not a single punchline scores.

While the shootouts and sprinting manage to entertain in a decidedly PG fashion, Fickman’s little touches stuffed into the corners of the frame lend “Race” the personality it dearly needs. Most notably, cameos by the original “Witch Mountain” kids, Kim Richards and Ike Eisenmann, help to liven up the proceedings with a little retro magic. And an appearance by author/alien abduction survivor Whitley Strieber gooses the space invader goofiness of the premise. However, the one appearance that completely blindsided me was Meredith Salenger, who pops up for a few seconds as “Natalie Gann,” a television reporter. Now there’s a lovely sentimental moment. 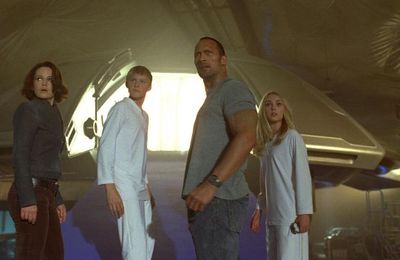 Boasting an AVC codec (2.40:1 aspect ratio), the BD “Witch Mountain” visual experience is very satisfying. A colorful production, the presentation is best during daylight sequences, where the hues can expand and facial detail is incredibly strong. Nighttime antics suffer from some inky black levels, turning a few complicated shots into a fog. Overall, a rock solid offering keeping in line with Disney’s above average BD output.

Better is the DTS HD 5.1 sound mix. With alien technology, action sequences, and verbal sparring, the mix has plenty of business to keep the ears engaged. Surround activity is plentiful, used superbly during special effect sequences and spaceship interiors. Dialogue is cleanly separated from soundtrack and scoring selections, and explosions do their best to impart a generous low-end quality to the track. French and Spanish 5.1 Dolby Digital tracks are also available.

“Deleted Scenes” (23:21, 480p) showcase discarded comedic bits and extended endings, and can be viewed with or without enlightening introductions from director Andy Fickman.

“Bloopers” (3:37, 480p) offers an assortment of mix-em-ups, with the emphasis on stunt work and Johnson’s goofball antics.

“Which Mountain?” (8:20, 1080p) is a Blu-ray exclusive featurette spotlighting the numerous cameos and tributes to the 1975 film (and other Disney product) Fickman placed inside his picture. It’s a terrific featurette, showing off some incredibly detailed fandom.

Disc Two is a DVD presentation of the film.

Disc Three is a Digital Copy of the film.

Granted, “Race to Witch Mountain” can become a little numbing at times, particularly during any extended staging of fisticuffs. Perhaps it should come as little surprise that the director of “The Game Plan” and “She’s the Man” doesn’t have much skill staging fight choreography. The movie is best appreciated as a flashy chase film of continuous peril. It’s hardly a suitable replacement for the earlier installments, yet it doesn’t exactly embarrass the franchise either. 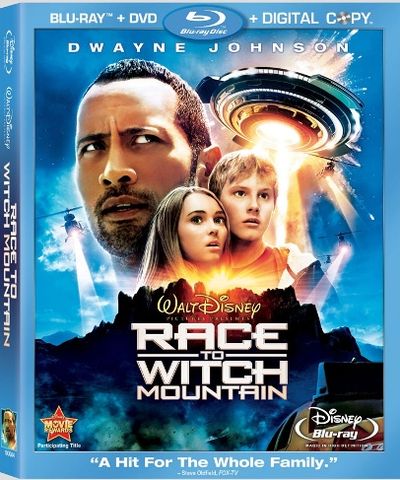