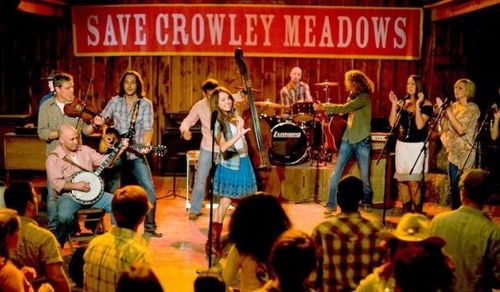 Letting fame as Hannah Montana bloat her ego, Miley Stewart (Miley Cyrus) has committed the ultimate sin of teendom: ruining the sweet sixteen birthday party prepared for her BFF, Lily (Emily Osment). Sensing his daughter needs some time away from the stage to “detox” her celebrity status, Robby Ray (Billy Ray Cyrus) takes his family back home to Tennessee for two weeks to get back in touch with their country roots. Settling in, Miley finds romance with cowboy Travis (Lucas Till), a renewed relationship with her grandmother (Margo Martindale), and a chance to feel life without the burden of the blonde wig. It’s only a matter of time before the town needs Hannah to perform a charity concert, leaving Miley unsure about her future as an artist, opening the door for a bumbling reporter (Peter Gunn) to nab the scoop of the century.

Having never watched more than a few flashes of the television show and personally passing the age of the target demo for this film by roughly 100 years, some may argue that I’m not the proper judge for “Hannah Montana: The Movie.” Truthfully, I might not possess the tools to compute country star cameos and vital supporting characters, but an infuriatingly slack pace doesn’t need a weekend cram session of DVD box sets to detect. Director Peter Chelsom (who’s gone from “Funny Bones” and “Hear My Song” to a Disney basic cable adaptation) seems hesitant to place any sort of fingerprint on the material, instead arranging a primary color caper for the Cyrus ensemble to parade around in. 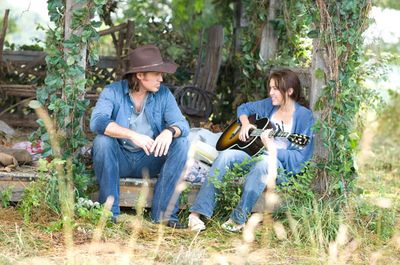 To be more specific: I’m not sure Chelsom was even awake during production. The editing throughout the picture is untidy and confusing, the camerawork seems afraid of the actors’ faces, and there’s little eagerness to build a snappy pace. Granted, “Movie” probably doesn’t represent Chelsom’s finest professional hour, but when faced with the well-oiled “Hannah Montana” machine, it doesn’t register as all that difficult to make it stand up and shout a little to entertain the young ones in the audiences.

The pokey quality of “Movie” only lasts for the first half of the film, where the breezy plot is arranged glacially and Chelsom fills up on loving shots of Tennessee farmland and idyllic small town hayseed bustle. After the aimless introduction, old faces from the show return to shake the material awake (while hardly Lucy and Ethel, Cyrus and Osment share generous slapstick chemistry the film should’ve embraced more tightly). “Movie” seems more concerned with puppy love than reheating established nonsense, but without laughs (I don’t mean duds, I mean actual attempts at humor), there seems little reason to stick around for the melodrama. Chelsom and Disney do their best to distract the audience with a multitude of musical numbers (a goofier one, “Hoedown Throwdown,” is destined to be this generation’s “Ninja Rap”), but the songs are atypically plastic country fodder for the spunky Cyrus, who possesses nice corroded cords for a singing voice and a bright, bedazzled camera presence. Chelsom doesn’t know what to do with her, keeping the star in a straitjacket for most of the picture. 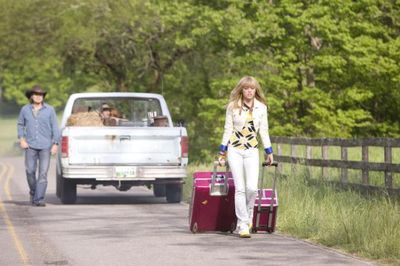 The AVC encoded image (1.85:1 aspect ratio) on the “Montana” BD creates a warm feeling of hometown love. A soft amber filter dominates most of the photography, but the image retains superb color reproduction and restrained black levels, preserving the candied antics of the screenplay. Detail is tremendous, with faces crisp and expressive, and locations evocative, especially anything dealing with country life.

The DTS-HD 7.1 Master Audio mix maintains a flavorful atmosphere of cartoon hijinks, concert sequences, and domestic drama. The blend keeps an easy pace, never stepping on the dialogue or overwhelming the emotion. Performance sequences do stand out with terrific fidelity, leaving the surrounds to provide ample crowd atmospherics. Small town ambiance is also settled nicely with bug and sidewalk business, making for a comfortable aural event. A Spanish 5.1 mix is also included.

A feature-length audio commentary with director Peter Chelsom is a straightforward listening experience, with the filmmaker doing a superb job doling out production information and backstage tidbits. Chelsom is quite proud of the film (recorded four days after its successful theatrical launch) and in love with his cast, so be prepared for an obscene amount of praise lavished on the actors. With his crisp British accent, Chelsom is easy to listen to and his enthusiasm appears real. However, the track is strictly for fans.

“Find Your Way Back Home” (15:05) is a featurette that heads to Franklin, Tennessee, where Miley Cyrus offers a personal tour of her hometown. Showing off the sites for the camera, Cyrus and mother Tish shop, sing, sign autographs (to hilariously excited fans), and pass along stories from the past. Emily Osment soon takes over to show off Los Angeles, eating hot dogs at Pink’s, visiting the Santa Monica Pier, and learnin’ stuff at the La Brea Tar Pits.

“I Should Have Gone To Film School – With Jason Earles” (15:17) follows the actor as he putters around the set, interviewing cast and crew to better understand how a film set works. Good information here, delivered with plenty of silliness and factoids to keep younger viewers interested.

“The Hoedown Throwdown Home Experience” (14:59) is a BTS look at the making of the bizarre dance sequence and how the cast was trained to pull off the complex moves. It segues into an instructional video on the dance, showing viewers how they can “pop it, lock it, polka dot it” at home.

“Deleted Scenes” (9:53) bundles most of the excised slapstick of the film, and restores actor Jason Earles to the story, showcasing an axed subplot that features Jackson Stewart trying to convince his father he’s off at college for the summer.

“Outtakes” (3:52) opens with director Chelsom describing Cyrus as “crazy funny.” It’s the usual routine of mix-em-ups and giggles, with cast and crew going out of their way to be wacky for the camera.

“Music Videos” (3:53) include “The Climb” (two versions), “You’ll Always Find Your Way Back Home,” and “Let’s Get Crazy” from Miley Cyrus, “Back to Tennessee” by Billy Ray Cyrus, “Crazier” by Taylor Swift,” and “Bless the Broken Road” by Rascal Flatts.

Disc Two is the DVD version of the film.

It’s a heaping of G-rated pleasantries, saccharine tunes (and screenwriting themes), and comforting faces, and with younger viewers just happy to be staring at their idol, I doubt anyone will fault “Hannah Montana: The Movie” for being a little on the sleepy side. Still, this picture held the seeds to be something livelier to match the charisma of the star, only to turn down the opportunity in the name of drowsy country living. 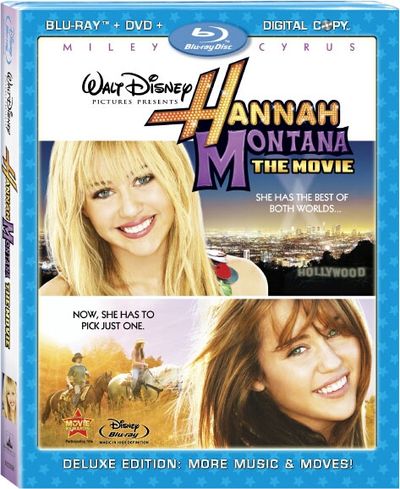