1989: 1987’s “Lethal Weapon” waltzed into my life through the miracle of VHS, filling a need for big boy bloodshed and acidic quips that every 12-year-old kid secretly holds deep down inside. It didn’t register as skillfully prepared cinematic junk food at the time, only as forbidden R-rated fruit, with blasting guns, peeks of nudity, and these weird swaths of comedy emerging from the former Max Rockatansky. By the time “Lethal Weapon 2” pulled up into cinemas, it was greeted with open arms by my high-pitched enthusiasm, an anticipation fattened on a steady diet of expert Warner Brothers marketing, who made this sequel feel like the action extravaganza house party of the summer. You’d be forever labeled a square if the invitation was declined.

There was a feeling of gleeful lawlessness to “Lethal 2” that made it such a dream moviegoing experience. While the picture stayed firmly rooted in action film convention, director Richard Donner and his screenwriters made a valiant attempt to puff up the picture with exhilarating novelty, including the introduction of those wicked South African villains. Even back in 1989, the routine of psychotic gangsters and Bondian madmen was wearing thin, making the appearance of cruel, steely, heavily accented diplomats a groovy anomaly. Couple the creeps with liberal bursts of cartoon mayhem, that strange shoulder dislocating bit, and Joe Pesci steamrolling into the hearts of millions as the motor-mouthed Leo Getz (“Okay, okay, okay…”), and here was a sequel that barely broke a sweat in its quest to top the original feature.

The pure matinee, popcorn-munching experience of watching “Lethal 2” barrel across the screen is something I will never forget, from the steel-jaw trap of the opening title to the climactic “Diplomatic immunity!” shoot-out. The film nearly knocked me unconscious. At the time, sequels weren’t supposed to be this superior. They weren’t supposed to make previous installments seem miserably second-rate. Unless they were “Godfather: Part II” or “Empire Strikes Back,” sequels were an assured creative dead end -- homeboys Siskel and Ebert always complained of this soul-flattening repetition. “Lethal 2” didn’t revolutionize the industry, but it provided a crunchy reminder on how to assemble a brisk, resourceful follow-up without much overt fuss. It was a swirl of cool, refrigerated air the midsummer blues needed. It also provided films like “Great Balls of Fire” with extra box office income due to the influx of scrappy kids like me who needed a PG-13 passport to an R-rated nirvana. It was a privilege to go spit that summer, preferably as many times as the allowance allowed.

2009: I’ve grown up to be quite a fervent “Lethal Weapon” franchise apologist. I adore the series, warts and all, and have found the pleasures of watching Gibson and Glover banter while knocking the stuffing out of the bad guys a great antidote to life’s less endearing qualities. “Lethal 1” was the hard-edged originator, with a bizarre ballet of violence to offset the buddy cop clichés it was restructuring. “Lethal 3” features a dreadfully realized villain, but deserves a ticker-tape parade for the introduction of Lorna Cole (Rene Russo, in the role that ruined women for me), a feisty, kick-happy romantic match for Riggs. “Lethal 4” offers a proper heavy (Jet Li), but makes a critical error replacing Russo (regulated to a glorified cameo) with Chris Rock and his stand-up trimmings. Like any long-standing series, the “Lethal Weapon” saga isn’t perfect, but it did achieve a superlative brew of bruises, bombs, and belly laughs with “Lethal 2.”

Watching “Lethal 2” as a child overpowered me in a fashion few movies could achieve. Its eccentricity was something I wasn’t prepared for; a contained but impatient outrageousness that illuminated an energizing environment of indeterminate insanity. After viewing the feature again with adult eyes, the promise of absurdity pops up with the introductory Warner Brothers shield: a few twinkles of the “Looney Tunes” theme. Donner, perhaps anticipating complaints of overtly cartoon violence, lobs a subtle sound cue that transforms the harsh accomplishments of the first film into a giant, sparkly super ball for the sequel.

Also keeping “Lethal 2” afloat besides endearing velocity is the accelerated development of the Riggs character. It’s a ballsy choice to domesticate the once suicidal madman so quickly, but the leap of faith pays off fluidly throughout the picture, giving Gibson more to play with than straightaway mulleted delirium. It allows the picture to nurture a tender familial ambiance, while creating a palpable sense of physical regression for the finale, where Riggs is invited to rediscover his old Mack Truck sense of vengeance. Subsequent sequels didn’t understand how to finesse more dramatic juice out of Riggs and his battered puppy personality, but the swift change of game suited “Lethal 2” wonderfully. The newfound sense of vulnerability allowed the miracle of surprise to enter the material, albeit surprise tightly leashed by industry expectation. “Lethal 2” isn’t exactly “The Wild Bunch,” but as vastly caloric, buddy cop cinema goes, it’s one of the finest examples of the genre, and, in my humble estimation, one of the greatest sequels put to film. Perhaps deranged hyperbole, but rarely does a follow-up outgun the original film as swiftly as “Lethal 2” does.

Nutshell: Two insurance company lackeys (Jonathan Silverman and Andrew McCarthy) uncover misappropriated funds, bringing the suspicious findings to their boss, Bernie (Terry Kiser). When Bernie is killed by the mob, the duo stumbles across the body at his beach house, sending them into a panic. Instead of reporting the death, the underlings decide to keep up Bernie’s appearances throughout the Labor Day weekend festivities. 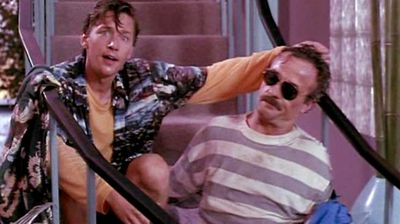 1989: You see, “Weekend at Bernie’s” is about a dead guy, and the two knuckleheads who try to pass him off as alive. Pretty simple stuff. Oh, it was a gimmick film, and it worked, bringing in a small fortune at the box office, tempting those in search of something oddball and farcical to occupy their time. I was one of the many. Again, it only took a PG-13 and a slightly bawdy premise to get me into the theater. I don’t recall much of a reaction to “Weekend,” outside of perhaps a swell of theater-hopping bliss. “Weekend” was one of the unlikely hits of the ’89 summer, a fact that befuddles most film fanatics to this day. Hell, it even spawned a 1993 sequel, making it perhaps one of the least welcome franchises in cinematic history, next to the “Problem Child” and “Cremaster” pictures.

It was summer, a slapstick beach comedy, and marginally tasteless. “Weekend at Bernie’s” had a few qualities in its favor. I’m sure I was pleased. Though my foggy memory is pointing toward a thumbs down.

2009: So, there’s nobody less enjoyable in a comedy than Jonathan Silverman, right? Wrong. He’s topped only by Andrew McCarthy. The co-stars play as broad as can be in “Weekend,” making the experience rewatching the film after a 20-year break moderately excruciating.

I’ll give it up to Kiser, who has the unfortunate duty of playing dead. It’s an impressively bendy, go-with-the-flow performance of post-life pliability. It’s a bit of old-style comedy within a decidedly ‘80’s feature of yuppie status, Catherine Mary Stuart as the object of affection, and the idea of Silverman and McCarthy as some type of heir to the Abbott and Costello throne. Director Ted Kotcheff wisely givens himself over to the premise heart and soul, but there’s little here that clicks in terms of genuine laughs. “Weekend” isn’t quite the appalling excuse for a comedy as I was expecting, but it blows a ripe premise on the worst possible actors and the lamest plot turns. Watching morons and bad penny dead guys should at least guarantee a few chuckles. “Weekend at Bernie’s” couldn’t even drag a smile out of me. Chalk it up to either old age or the calcification of taste. Or just blame it on Silverman and McCarthy, who found their careers rightfully torn to shreds soon after the release of the film.

I now wait patiently for the inevitable remake, preferably with Jonah Hill and Michael Cera as the working stiffs, and Ben Kingsley as the real stiff.

And Rob Reiner marries wit, romance, and charm in a marvelous summer sleeper.

Homer Simpson: Before Lethal Weapon 2, I never thought there could be a bomb in my toilet, but now I check every time.
Marge Simpson: It's true. He does.

Hi Marge and Homer! Talking about Lethal Weapon 2, maybe you should also check if there isn't a red BMW in front of your house. :)