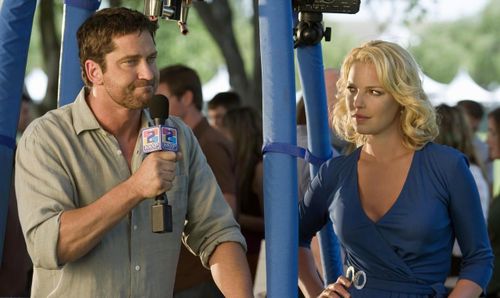 “A little sexist. It paints the women as shrews, as humorless and uptight, and it paints the men as lovable, goofy, fun-loving guys. It exaggerated the characters, and I had a hard time with it, on some days. I’m playing such a bitch; why is she being such a killjoy? Why is this how you’re portraying women?” – Katherine Heigl on “Knocked Up,” Vanity Fair, January 2008.

Take the above quote as gospel and Katherine Heigl is one demented human being. While she has every right to protest her experience working on her most successful artistic endeavor to date, Heigl has followed up the film with the wedding day fable “27 Dresses,” and now the loathsome “Ugly Truth.” Perhaps under the command of Judd Apatow, Heigl felt restrained, but “Truth” gives her all the power in the world to make a romantic comedy suited to her apparently sensitive world view (she stars and co-produces with her mother). So what does she create? A misogynistic, hateful, profane comedy that gives charm the heave-ho, punts away any viable dramatic hold within the first five minutes, and reduces the age-old battle of the sexes, big screen spitfire to an ear-bleeding spasm of shrillness. Apatow is practically Gloria Steinem compared to Heigl’s own insidious idea of ribald sexual politics.

A television producer with obscenely high personal standards for her dates, Abby (Katherine Heigl) is resigned to the single life. To boost ratings, her bosses hire Mike (Gerard Butler) to join the morning show. A gruff, no-nonsense cable access personality who speaks about the primal nature of male needs and female follies, Mike is rude, crude, and an immediate smash on the show, much to Abby’s horror. Finding his dating advice oddly useful, Abby indulges Mike’s caveman ways, hoping to land a handsome neighbor and end her sexual dry spell. While successful with her manhunt, Abby finds herself drawn to Mike’s wounded side, creating an explosive and potentially damaging chemistry between the combative co-workers.

Director Robert Luketic built a name for himself with a string of garish romantic comedies (“Legally Blonde,” “Monster-in-Law”), but found some fertile dramatic ground with last year’s casino takedown thriller, “21.” Well, Luketic is back to square one with “Truth,” returning to his wheelhouse of pronounced comedy, strained chemistry, and odious romantic idealism. 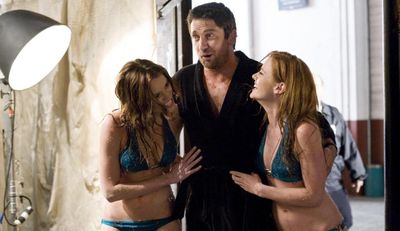 Credited to three female writers, “Truth” looks to turn the tables on the raunchy comedy genre, a typically male-dominated cinematic sport. It’s Abby versus Mike on the playing field of love, but instead of swoon and smiles, “Truth” wants to hump a leg or two, rolling out a series of dirty jokes calculated to build a considerable reservoir of shock value to wash over audience members perhaps unaccustomed to such sourness from their sweets. It’s not the velocity of crudeness that bothered me in “Truth,” it’s the misguided nature of the production; a film eager to create a special glaze of drippy sympathy for the two main characters while also indulging in an oral sex joke or three.

I hate to bring “The Hangover” into this argument (though the two share identical end credit songs), but the summer smash tiptoes on the same naughty comedic battlefield as “Truth.” However, “Hangover” is a (somewhat) dirty comedy that never loses sight of the laughs. “Truth” stages massive hard R-rated slapstick set-pieces for Abby and Mike (including a tango with vibrating panties and Jell-O wrestling) while drawing the two opposites together as a viable couple. The complicated mating game is well beyond Luketic’s skill level. Instead of growing a passable blend of sympathy and trauma, “Truth” instead bucks like a bronco, losing its grip on a consistent tone while it tries the Hail Mary throw of repulsion mixed with plausible flirtation.

Heigl and Butler are enthusiastic to infuse their characters with a free-for-all attitude, looking quite content tossing around frat house language within a genre that would normally remain verbally chaste. Their glee is palpable, but what message is “Truth” ultimately sending? Mike is a misogynistic pig with a limited opinion of women. Abby is a high-maintenance tornado who craves an ideal mate. “Truth” establishes Mike’s behavior as the reality of life, and while it’s a comedic device, Luketic and the screenplay further endorse Mike’s worldview by making him a victim of failed relationships -- the wounded puppy surrounded by irrational women, forced to gnash his baby teeth and fight fire with fire. It’s a screenwriting cheat of the highest order. And Abby, dear sweet Abby, well she’s the helpless, cat-lady ghoul who can’t help but fall for this man of men, torching her self-respect because in the Hollywood jig of love, hugs always take precedence over dignity. 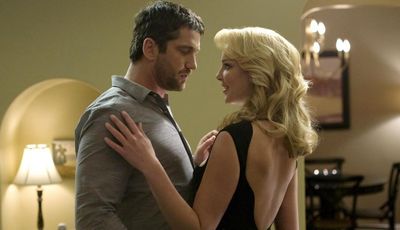 There’s no atmosphere of realism at play in “Truth,” and the script barely makes sense of Mike’s private life, where he openly shares his distaste for women with his 12-year-old nephew. In the end, Mike is celebrated for his honesty and forthright attitude and Abby is reprimanded for her expectations and romantic concern. Is this the type of film we want young girls to see? Yes ladies, give up your standards and cast aside your dreams, and you too can enjoy the primal throb of a loudmouth dimwit fresh from 100 failed relationships, ‘roided up with a splattery amount of anti-chick venom.  Perhaps I’m digging too deeply here, but my overt sensitivity was brought on by merciless boredom, forcing me to consider the larger portrait of contempt on display here, while Luketic tries his damndest to mimic the Farrelly Brothers oeuvre to cover the script’s facepalm-inducing sexism.

Again, it’s incredible to note that “The Ugly Truth” was written by three women. It took three women to dream up a myriad of ways to humiliate Abby, tear down her self-esteem, and replace the divot with moony sequences of attraction to a mentally challenged lothario that we, the audience, are supposed to root for. As long as the leads are attractive, the soundtrack is filled with pop hits, and the script serves up a succession of mind-numbing contrivances, who really cares that this picture feels like a 100-minute-long hate crime?