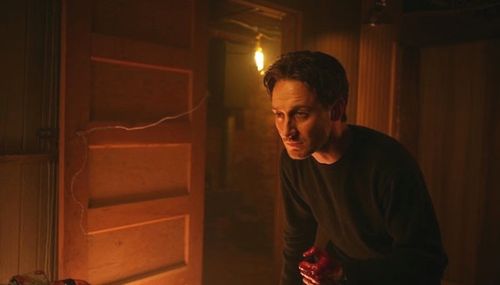 Writers Patrick Melton and Marcus Dunstan are primarily known for their goopy work on the last few “Saw” sequels. Well, the boys are up to their old torture tricks with “The Collector,” though it’s heartening to find some improvement in the fright and performance departments. A grisly, sicko suspense ride, “Collector” is miles ahead of the “Saw” franchise. Perhaps that’s damning the film with faint praise, but “Collector” has some genuinely inspired moments to alleviate its cancerous stupidity.

Finding troubling financial pressure from his ex-wife, Arkin (Josh Stewart, doing much with very little) looks to his day job as a handyman to help scope out the home of a jeweler who’s planning a getaway with his family. Returning at night to retrieve a massive stone inside a safe, Arkin finds he’s not alone. A masked madman has come to the property to collect a family member for his sick purposes, rigging the property with numerous traps and torture devices that await anyone who dares to escape. Faced with a moral dilemma, Arkin decides to help the family flee, only to become entwined in The Collector’s wicked scheme of suffering.

What’s so pleasant about “The Collector” is its simplicity and straightforward thinking. Dunstan, making his directorial debut, arranges his pawns quickly and effectively, cleaving away mountains of unnecessary character development to strike hard at the primary motivation: money. Arkin’s goal is one of financial gain, heading into a peaceful country home to wipe away his problems with one lucrative crime. Dunstan sets up the conflict swiftly and it feels surprisingly organic. Compared to the useless, eye-crossing maze structure of the “Saw” sequels, it’s refreshing to find “The Collector” in a hurry to get to the meat of the matter: the bloodshed.

To help compensate for his lack of production coin, Dunstan saturates “Collector” in style. It’s a flashy picture, with cinematographer Brandon Cox arranging a gritty, acid-washed look for the film that accentuates the nightmare for the characters. “Collector” has moments of pure visual punch that are thrilling, boosting the creep factor around the home and setting a forbidding atmosphere of dread in the early going. But Dunstan also gives in to trendy fright flick stylistics that suck the life out of the movie, especially when show-off camera routines begin to interfere with critical spatial relationships. Also boosted by a nicely invasive aural ambush (soundtrack selections tear through the screen), “Collector” is best when it crudely marries sight and sound, erecting a vicious backdrop of misery for Arkin as he descends further into The Collector’s splattery web.

Pushing the R-rating to the breaking point, “Collector” is a profoundly violent feature, and if you’re an animal lover, I wouldn’t go near it. While covering all angles of slices and dices, “Collector” is fixated on bodily harm, with the villain taking great care to slowly puncture and pull sensitive areas that hold universal revulsion. Dunstan removes much of the fantastical nature of the traps to sustain a painful reality to The Collector’s rampage. Teeth are chiseled away, fingernails are scraped off, and fishhooks are plunged into eyelids. It’s not pretty, but for a genre that consistently gets off on a Hanna-Barbera aesthetic to shock audiences out of their allowance money, it’s interesting to see primal fear put back on the screen, forcing the crowds to twist and shout their way through the agony.

Unfortunately, Dunstan doesn’t know where to end this picture, finding nearly four potential stop points that he carelessly blows off to extend the chills. It sours the entire film, dragging it well beyond any reasonable entertainment value, making the final 15 minutes as punishing as anything Arkin endures. It’s a shame, since “The Collector” does manage to create some excitement out of rusty genre parts.