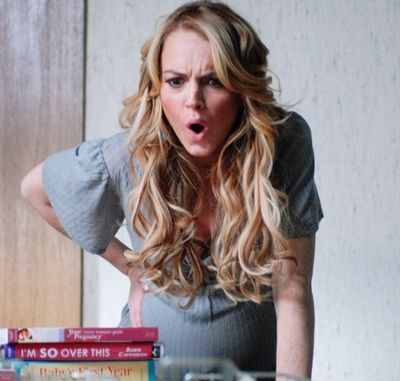 Burning through a film career in the same time it takes some people to shop for car insurance, Lindsay Lohan suffered a major blow two years back when she agreed to star in the laughable thriller, “I Know Who Killed Me.” It was then and there that Ms. Lohan went from a praiseworthy ingénue to a bad actress statistic, effectively killing her screen career through a series of poor artistic and personal choices. “Labor Pains” symbolizes Lohan’s attempt to climb the Hollywood rope all over again, forgoing an interesting, cunning rebirth to make a dreadful sitcom-style film that merely asks her to show up and stand in front of a camera. “Pains” is aptly titled, placing the visibly exhausted star in the center of a motherhood farce that’s miles above her skill level.

A beleaguered secretary at a publishing house, Thea (Lindsay Lohan) is trying to protect her job from an abusive boss (Chris Parnell), desperate to keep employment to support her sister through college. Threatened with termination, Thea claims pregnancy, much to the surprise of the office and workplace BFF, Lisa (Cheryl Hines). Now forced to fake her way to term, Thea embarks on a series of foam bellies and bewildered reactions to the stages of pregnancy. Charming the pants off Nick (Luke Kirby), her ambitious superior, Thea is placed in charge of a sardonic pregnancy book written by a curious expectant mother (Bonnie Somerville), leaving her deception wide open for discovery.

“Labor Pains” isn’t a devastatingly awful picture that requires a bottle of booze and a nap to flush out of the system, but it’s offensively subpar. Filmmaker Lara Shapiro doesn’t exactly direct the feature, she’s just simply the one in charge, ordered to manufacture something airy and cute out of a pile of clichés and bored actors. Shapiro shows no authority here, lacking any semblance of spunky comic timing to boost “Pains” to a plateau of giggles. She’s also horrible with organization, leaving Thea’s boyfriend Miles (played with typical repulsion by Aaron Yoo), a critical presence in the film, a complete mystery: the character is introduced, somehow agrees to this bizarre con (we never see his reaction), and is quickly ushered away as a nuisance, making room for Thea to make googly eyes with Nick.

Oh yes, did I mention “Labor Pains” is more of a romantic comedy than a pregnancy spoof? Reducing the script to a mere photocopy of any other rom-com around, “Pains” holds to this notion that it’s better to focus on bringing these opposites together than playfully toy with Thea’s anxiety. Of course, it doesn’t help that Lohan and Kirby share the type of chemistry you’d find with a pair of strangers awaiting appointments at Planned Parenthood, or that the actors are lacking the needed charisma to allow the viewer a chance to root for these fools. Shapiro, clinging to formula with the dedication of a nun to Jesus, instead pounds the square subplot into the round hole of the movie, making the final 20 minutes of the film (the requisite break-up-to-make-up scenario) something out of a bad Matthew McConaughey movie. And by bad Matthew McConaughey movie I mean all Matthew McConaughey movies.

“Labor Pains” is a dreary comedy, lazily going through the motions, accurately reflecting Lohan’s current interest level in her own self-worth. There’s nothing funny or sweet about it. The film is just a puddle of mediocrity from filmmakers who couldn’t be bothered with putting some effort into their work, and a lead actress who’s only trolling for a quick paycheck. 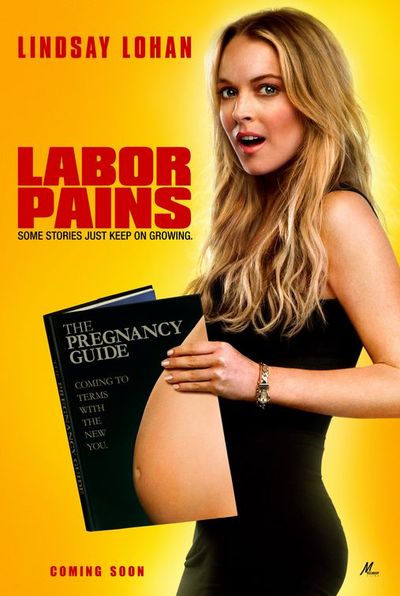 What a filthy disgrace...wonder hom many types of drugs are propping up this trollette...

By accepting to make things like this, Lindsay shows she has no respect for herself as an actress, which is no surprise because this woman is not having self-respect at all these days. Some people could say she does it for the paycheck but... paycheck for what? More alcohol, more drugs? That's not worth it.