Film Review - In the Loop A political farce with wonderful ricochet timing and stellar acting, “In the Loop” reaches for both the brazen and the bizarre to manufacture a hopping comedy. If only all bureaucratic adventures could share this type of spirit; “Loop” establishes itself as an acidic force of nature, confident with brutal exchanges of opinion, yet retains a cutting satirical curve that buttresses the film’s undeniable pull toward outright silliness.

Stumbling through a radio interview, spouting off vague plans for future military activity in the Middle East, Minister for Internal Development Simon Foster (Tom Hollander) has found himself in a media hailstorm. Sent to Washington by the Prime Minister’s Director of Communications (Peter Capaldi), Foster and aide Toby (Chris Addison) meet up with Secretary for Diplomacy Karen Clarke (Mimi Kennedy) to find out the latest news on the war front. With Washington and Britain in a state of panic over Foster’s comments, it allows a wide assortment of politicians (including David Rasche), ambitious assistants (Anna Chlumsky), and a Pentagon heavyweight (James Gandolfini) to take the opportunity and spin the news in different directions, satisfying their own agendas.

Shot in a quivering, zooming documentary style, “In the Loop” struggles in the early going with a familiar visual fingerprint easily unidentifiable with British sitcoms and possibly the Christopher Guest filmography of improv-heavy satires. Perhaps filmmaker Armando Iannucci comprehends he isn’t breaking new ground with this farce, so he front-loads the material with pure wit and juicy rage, stepping into the bitter political arena to comedically summarize the frenzy of opportunity and crushing swings of contempt.

While straightforward in plot, “In the Loop” carefully twists this collection of politicians and predators into a chess game of allegiances and backstabbing, observing the opportunists stumble and succeed while shaping certain combat doom. It’s a frighteningly clever script, beautifully executed by the cast, who employ a theatrical-lubed verbal timing that rarely uncovers a dud. While the best examples of the genre require only arched eyebrows and occasional titters to support, “In the Loop” is genuinely hilarious and lusciously mean. Iannaucci conducts this assembly of actors like a grand symphony, with dry wit and pop culture insults colliding amongst the bold, the enraged, and the dim-witted. And somebody get Capaldi an Oscar or knighthood for his work here as the apoplectic man in charge, a vicious fellow that nobody stands next to for long.

As manipulations tighten and schemes are sorted out, “In the Loop” begins to sag, losing its edge in the pursuit of a decisive finishing move to close the film on a potent thrust of recognizable political mischief. It’s understandable but unnecessary, bloating a film that should be as lean and mean as possible. Still, it doesn’t erase the glorious pinch of the feature, making it one of the best political comedies in quite some time. 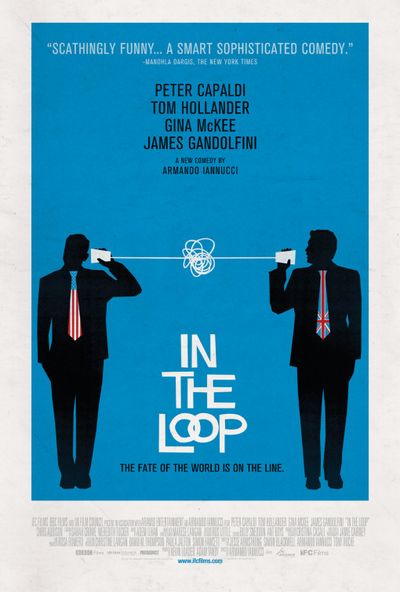