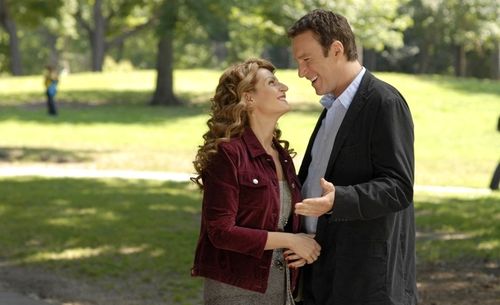 Ahh, yes, there’s no better time of year to issue a film titled “I Hate Valentine’s Day” than the weekend celebrating the Fourth of July holiday. I suppose you could label it clever counterprogramming, but I’m more inclined to consider the release date as the latest in a long series of bad ideas when it comes to this bland, winded motion picture.

A florist with severe, long-simmering relationship issues, Genevieve (Nia Vardalos) holds to a strict rule of five dates before she casts off potential boyfriends, protecting herself from the inevitable decline of passion. Into her life comes Greg (John Corbett), a single guy who doesn’t understand women, hoping to channel his focus into his own tapas bar. Immediatley attracted to each other, Genevieve and Greg decide to ride out the five date routine, only to find their flirtations develop into love. Greg, sensing the end of the dating decree nearing, reluctantly leaves Genevieve behind. Genevieve, realizing she’s made a mistake, is forced to confront her male issues, preferably before Greg moves on to another woman.

Less than a month ago, Nia Vardalos starred in “My Life in Ruins,” a disastrous romantic comedy that made a superb case for the actress to squash her film dream altogether. However, for “Valentine’s Day,” Vardalos has newfound control. Starring, scripting, and directing the picture, Vardalos has been permitted every opportunity to scrape away the artery-clogging muck that often stymies the romantic comedy genre. She’s been handed the keys to her own motion picture and given license to take her imagination as far as a low-budget and sky-high cinematic hopes take you these days. Depressingly, Vardalos has elected to make the same nondescript junk as everyone else, hoping once again to coast on her beaming “My Big Fat Greek Wedding” fame to resuscitate her fledgling career.

Gay best friends, karaoke sequences, modern art mockery, he said/she said confusion, vociferous Noo Yawk neighborhood support (including Rachel Dratch, Judah Friedlander, and Zoe Kazan), and a host of beleaguered male stereotypes, Vardalos imagines the battlefield of love as a screenplay stitched together from a thousand other screenplays, rehashing the rules of attraction with all the compelling resourcefulness of a rejected CW sitcom pilot. “Valentine’s Day” isn’t exactly the cancel-the-afternoon-plans-and-bring-me-a-loaded-shotgun disgrace “Ruins” was, but the exhausting formula, and Vardalos’s staunch support of mediocrity, is brutal on the senses. The film plays easy to persuade wide acceptance, but Vardalos overcooks the kindness, making a slightly poisonous concept frustratingly flavorless.

Vardalos aims to please, and the casting of her “Greek Wedding” co-star Corbett is a step toward reigniting her previous success. The two share passable chemistry, but their individual approaches to the script are wildly diverse. Corbett slaps on the easy, everyday handsome loser suit, playing dim but lovable, like he always does. Vardalos heads in the opposite direction, turning on the personality high beams as though she’s aware the pages are worthless. It’s a slightly surreal piece of acting meant to communicate a sexual confidence formed over years of emotional distance. However, it often registers as a cartoon voice audition reel, with spazzy facial responses and other idiosyncratic behaviors creeping further into the work as the film unspools. It’s a strange Cheshire Cat performance that reads as desperate. With the pages failing to generate any laughs, Vardalos has resorted to eye-bulging and smirking to encourage moderate results.

Of course, there’s a domestic disturbance price for Genevieve to pay before her heart can be freed, giving the actors some flabby dramatics to chew on and permits a break-up-to-make up finale that wheelbarrows out some syrupy cutes. “I Hate Valentine’s Day” hopes to climax on a comforting, whimsical note, but the damage has been done. By the time the end credits hit, there’s joy emerging not from the outcome of the Genevieve/Greg romantic tango, but the feeling of relief to know the film, and Vardalos’s insipid direction, has finally come to a close. 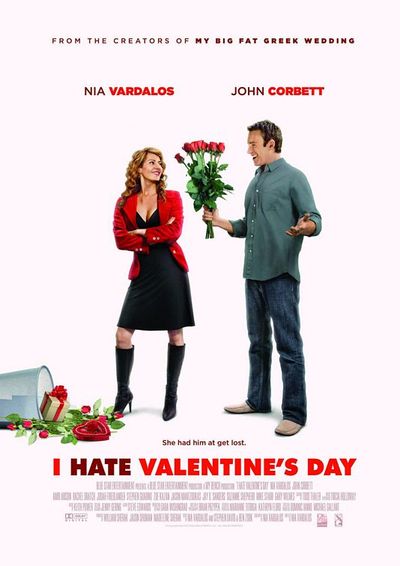