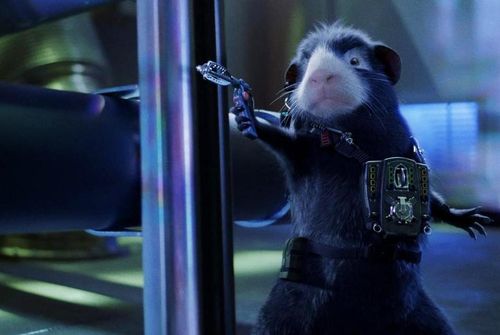 Members of a top secret government spy squad, guinea pigs Darwin (voiced by Sam Rockwell), Juarez (Penelope Cruz), Blaster (Tracey Morgan), and mole Speckles (Nicolas Cage) make up the G-Force, guided by human agents Ben (Zach Galifianakis) and Marcie (Kelli Garner, in a role that’s been whittled down to a near-wordless cameo). On the hunt to uncover the insidious plan of global industrialist Saber (Bill Nighy), the team is unexpectedly shut down by a bureaucratic stooge (Will Arnett), retreating to a pet store to regroup and reassess the plan of attack. Meeting fellow cage inhabitants Hurley (Jon Favreau) and Bucky (Steve Buscemi), Darwin comes to learn his past might not have been as glamorous as originally thought, but his future and his country need his services to stop Saber from taking over the world through household appliances.

Director Hoyt Yeatman has enjoyed a long career as a special effects mastermind behind some of Hollywood biggest blockbusters, even winning an Academy Award for his work on James Cameron’s masterwork, “The Abyss.” It makes sense that for his filmmaking debut, Yeatman was handed CG-intensive material, playing to his strengths as an imaginative man with technical expertise. When “G-Force” is locked into adventure mode, it’s an unexpected charmer, with Yeatman taking the cartoon premise and making a “Mission: Impossible” quest out of it, though lowered to a friendly scale that remains approachable for family audiences.

I was taken with “G-Force” during the introductory sequences. The marriage of visual effects and distinctive voice work from the actors generates a special distraction of comedy and action, constructing a plucky matinee playground to enjoy. Boosted by 3-D imagery, “G-Force” has a unique personality, bountiful CG flair, and enough boomy, peppy Black Eyed Peas songs to keep the motor humming acceptably. Kids should be enthralled. 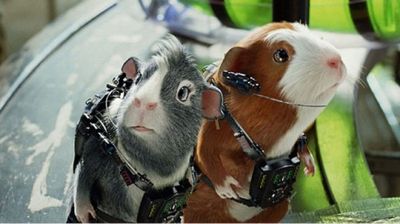 Possibly in a page count panic to fill 90 minutes, the writers insist on an emotional conflict for Darwin and the gang to stall for time, sticking to a moldy screenwriting template that submerges our heroes in doubt so the production can concoct a false sense of triumph. It’s an unnecessary step, and worse, it kills the momentum of the picture. The actors do a superb job crafting personalities for the rodents (Cage is in silly voice heaven). Forcing backstory and self-esteem issues into the mix undercuts their work. “G-Force” is already over-scripted as it is, with the Saber plot involving a strangely complicated introduction before a payoff with “Transformers” style metallic mayhem. If only more time was spent flattening out the mission and less time on wringing depth from the guinea pigs, there might be more to cheer for here than the occasional explosion and act of rodent heroism.

“G-Force” is a halfway interesting movie that doesn’t trust itself enough to just run carefree and enjoy the wacky premise. Instead we’re treated to fart jokes, achingly dull scripting, and exposition that eats up nearly half the movie. It’s super-intelligent guinea pigs who update their Facebook pages, know how to hack computers, and dodge fireballs. It hardly needs gravitas to provide a full course cinematic meal.