Now off to college, Sam (Shia LeBeouf) has discovered a shard of the AllSpark in his old clothes, which, upon touch, imprints the skittish young man with a series of mystifying symbols that he can’t get out of his head. Coming to his aid are the Autobots, led by Optimus Prime (voiced by Peter Cullen), who have joined forces with the U.S. military to find and destroy errant Decepticons. Sam’s path leads to a secret history of the Transformers on Earth thousands of years old, revealing the Dynasty of the Primes, and its power mad defector, The Fallen (Tony Todd). When Prime is sidelined by a reborn Megatron (Hugo Weaving), it’s up to Sam, girlfriend Mikaela (Megan Fox), former Sector Seven employee Simmons (John Turturro), roommate Leo (Ramon Rodriguez, the movie’s most egregious casting mistake), and old military friends (Josh Duhamel and Tyrese Gibson) to team up and thwart The Fallen’s plan to reclaim his throne and steal the Energon-producing power of the Sun from Earth through the use of the prized Matrix of Leadership key.

Weary and bruised, but smiling, I came out of “Transformers” flabbergasted over how Bay could manage to muzzle himself to such a degree that his giant robot war movie felt pleasurable, not assaultive. He turned an impossible live-action proposition into a swell bit of explosive escapism, noticeably keeping the odious Bayisms in play throughout the film, but dialing down his habits just enough to appreciate a breath of fresh air. “Revenge of the Fallen” sets out to destroy that phenomenal progress. Cocksure about what audiences demand from a “Transformers” picture, Bay drops any tinge of restraint like a bad habit and lurches forward into his old stomping grounds of excess and idiocy. Invention, or at least detectable visual moderation, has been punted out of the insufferable “Revenge” equation. This one is strictly dedicated to Bay’s ego.

“Transformers” was certainly no delicate art film, but there was a charitable feeling of the unexpected layered over a 140-minute-long running time that was stimulating, a sensation immediately swollen tenfold for any fan of the mid-80’s Hasbro toy line. “Revenge” reduces the widescreen awe to a barely audible squeak, placing greater emphasis on comedy. Yes, comedy. For reasons that completely escape my mental perimeter, Bay and his writers have decided that, while we all go to these pictures for the enormous robot fights, we stay for the laughs. This leaves the dead space between action beats reserved for rear nudity from Turturro, “twin” jive-talkin’ Autobots Mudflap and Skids (triggering an uncomfortable Jar-Jaresque racial stereotyping alarm), a reveal of testicles on the Constructicon behemoth Devastator, extended time with Sam’s stridently unfunny parents Judy (Julie White) and Ron (Kevin Dunn), Decepticon spy Wheelie and his leg-humping desires, a Rainn Wilson cameo, and a stuffy GWB-age government official caricature tossed in to challenge the allegiance between human and Autobot. If you’re not laughing by now, I’m with you. Bay is persistent about making jokes the focal point of the show, often abandoning the majesty of the concept to gather cheap laughs. It’s a crime. “Transformers” had its fun and a fair share of dud gags, but the stupidity is cranked here beyond all practical intent.

When the Autobots and Decepticons are permitted their swirly, slashy moments of private-property-trashing combat, “Revenge” stages the metallic crunch suitably, using the addition of new Transformer faces to repaint the violence. There could be an entire movie made from Optimus Prime and his soldiering ways (Cullen is a masterful voice actor), but “Revenge” never chases the concept. Instead, the screenplay is littered with needlessly complex narrative detours, leading to the useless introduction of The Fallen character. With plenty of gas in the tank left to fuel the antagonistic Megatron/Starscream relationship, not to mention the endearing protector pairing of Sam and Bumblebee, it comes across as foolish for Bay to introduce a plethora of new faces when the old faces still retain plenty of potential for superb screen conflict and bonding. But this is a film that thinks two male dogs humping each other is comic gold, making it clear to me that perhaps Bay doesn’t care much about juicy intergalactic, shape-shifting interaction, but more about the potential marketing tie-ins that breast feed his bank accounts.

I write about this film like it personally insulted my mother, yet I can’t help but feel totally deflated by the filmmaking apathy of “Revenge.” The feature is Bay trudging through his hoary, heavily rehearsed motions of explosions upon explosions; reducing fantastical globetrotting plotting to a repetitive yawn; fetishizing military weaponry, personnel, and casualty with porn-like visual perfectionism; objectifying women like there’s no tomorrow, including a perpetually moist Megan Fox (playing a character with apparent access to lip gloss and push-up bras in the desert wilds of Egypt) and Isabel Lucas, here poorly portraying a human Decepticon Pretender; and encouraging Shia LeBeouf to spaz it up to the nth degree (his specialty). It’s takes 150 minutes (it’ll feel like a long weekend, guaranteed) for “Revenge” to organize its hilariously complicated storyline, with at least 149 minutes devoted to anesthetizing, tongue-twisting exposition. It’s a lot of needless baggage for a “Transformers” film to clutch, and it all crumbles into a numbing mush about halfway through, when it’s clear Michael Bay isn’t going to chip in the proper effort to keep this once promising franchise headed in a suitably dignified and fist-pumpingly thrilling direction. 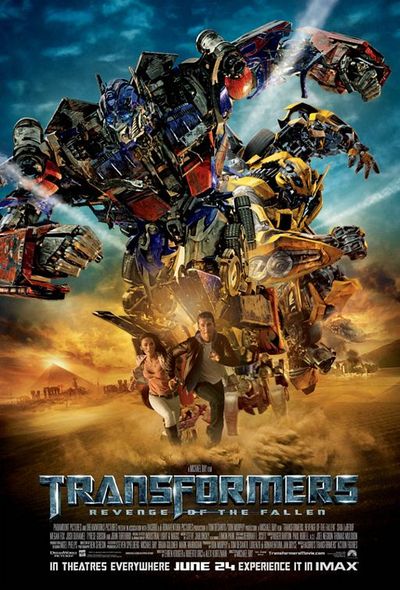 I was worried that this was gonna happen.

So just because there's two Jar Jar Binks-style characters, Megan Fox looking too good during a tense battle (give me a fucking break, SUSPEND DISBELIEF!), and cheap laughs, it's a dud? My God, have people become so pussified that even one problem just plagues the entire foundation?

Nah, but in all honesty, I'll see how the film fares tomorrow. If it sucks, I'll bail early. Still, the soundtrack had me riveted to no end, so I can't imagine that this film will be a disaster.

Brian, this review is spot on. Michael Bay is an egotistal retard. I recommend he be sentenced to a year's solitary confinement with only Robert McKee's STORY for company.

It finally happened. now that I've read this I think I can skip this movie. I'm better off with "Transformers animated". It's unbelievable that a Cartoon Show aimed at Kids has far more Structured story and characters than this million-Dollar Obscenity ride,a pity it's been cancelled.

A blind monkey on crack could review movies better than this guy! I do agree the movie could have done without the added Jar-Jar bots.

I think it´s a great movie, excellent animationand also the music of linking park with "new divide" in the end of the movie.the new autobots and deceptions so cool !!
runescape money