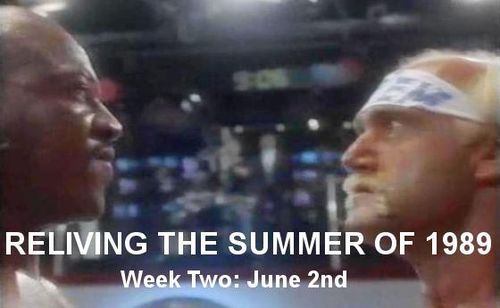 1989: Two decades ago, professional wrestling was just beginning its heartbreaking, inevitable descent from the delirious popularity it enjoyed in the mid-1980s. I was not immune to the madness. While I generally view wrestling today as eye-rolling GED opera for the sleeveless, when I was a pup, there was absolutely nothing that could top its excitement. It was a time before creepy sexuality and career-minded bodybuilders infested the “sport;” a golden age of monosyllabic goons who dressed up in cartoon underwear and rumbled at the local community center gladiatorial arena (eventually graduating to football stadiums and drinking problems). Wrestling used to be cool, and nobody represented the ideal pomp and rah-rah soul of the game more distinctly and baldly than Hulk Hogan. 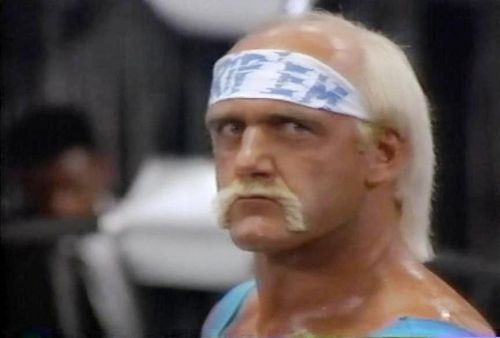 “No Holds Barred” wasn’t Hogan’s debut ride inside the motion picture business machine (who else could play a character dubbed “Thunderlips” in “Rocky III?”), but it represented his first calculated shot at screen stardom as the luster of the squared circle was starting to fade. Imagine being a young male, raised in the heartland of pro-wrestling (for a Minnesota kid, Verne Gagne’s AWA was mother’s milk), and now offered a chance to watch Hulk Hogan crack skulls on film? And Joan Severance strips down to her underwear? And Mean Gene Okerlund cameos? One please!

“No Holds Barred” is a fuzzy memory for me, yet I can recall an unreasonable feeling of excitement and curiosity about it, not only for its cherished pro-wrestling ties, but also for an implicit promise of PG-13 mayhem instigated by a deeply animated Hulk Hogan. Lister’s Zeus character was also a sizable question mark to kids everywhere. Just who was this nose-breathing, cross-eyed behemoth, and why was he so damn sure he could kick Hulkster’s ass? Brother, the answers were only a ticket purchase away.

2009: Time has not been kind to “No Holds Barred.” Outside of the humiliating fact that the film has never even been issued on DVD, “Barred” has dated poorly in just about every single aspect of motion picture production. The miracle here is that the feature is actually easy to watch, cruising on a bad cinema high that makes certain instances of Rip’s ridiculous street justice a total hoot. Still, the Vivid Video production value tends to grate on the nerves, along with Kurt Fuller’s amphetamine-encrusted turn as Brill. Fuller is brazenly apoplectic in “Barred,” perhaps in a futile attempt to assert his actorly might while trapped between gigantic, snarling monsters. It couldn’t have been easy for Fuller, but at least he isn’t slathered in baby oil, which I suspect ate up at least 80% of this film’s budget. The other 20%? Spandex and headbands.

Let’s face it, Hulk Hogan can’t act. There’s an undeniable novelty in seeing Hogan virile, golden, and throwin’ around modified shakas as Rip in “Barred,” but the Hulkster spits out his dialogue with all the confidence of a hurried ESL student on test day, and his romantic entanglements with Severance look about two innocent cocaine snorts away from date rape. Playing the All-American hero facing down an unreasonably aggressive demon, Hogan is enormous fun if expectations of a proper cinematic performance are blindfolded, drugged, and buried in the back yard alive. Otherwise, 90 long, cruel minutes watching Rip easily thwart Brill’s dastardly deeds time and again while barely able to form a coherent sentence is going to feel like a sick joke absent a needed “Mystery Science Theater” punchline.

However, the movie does amusingly climax with an engorged Rip committing a triumphant double homicide to save the day. Hooray! That, my friends, is a thing of beauty.

Nutshell: English teacher John Keating (Robin Williams) comes to the Welton Academy prep school circa 1959 to teach young men about the visceral nature of poetry. Along the way, Keating inspires the boys to think for themselves, much to the dismay of school officials and parents.

1989: “Dead Poets Society” was the premiere sleeper hit of 1989, starting life as the modest alternative to peppery summer antics, and ending up nearly 100 million bucks richer by the end of the year -- back when 100 million bucks actually meant something at the box office. The film was the soul food of the local cinema line-up, a safe bet for those who wanted to either lose themselves within a feature of softer, human embellishments or to pat themselves on the back for choosing a movie that wasn’t outwardly wired with brain-dead tendencies. For reasons that are primarily tied to the unreasonable objections of youth, I privately rejected “Dead Poets” as a tool for the pretentious, a feeling amplified when the picture slammed into the educational exhibition circuit as this perverse ideal statement of teacher-student intimacy. Hogwash! Oh, and the whole “Carpe diem” movement was just as revolting. It’s one thing for a feature film to bedazzle the screenplay with glittering Horace positivity, it’s another to hear the same Latin phrase emerging incessantly from table chatter inside a junior high lunchroom.

2009: Now “Dead Poets” makes more sense to me, both as tranquil Hollywood entertainment and as endearing melodrama. While I’m loathe to suggest such a demeaning concept, but perhaps I actually was “too young for it” decades back, responding more to the popularity of the film rather than its numerous tender qualities. While my reaction today to the picture is far from euphoric, “Dead Poets” struck me with its crushing earnestness. In trying to articulate the joy of personal liberation through education, director Peter Weir (a name that didn’t register then, yet towers now) cuts to the desperation of Keating’s boys with a pleasing directness (the “Carpe diem” concept resonates firmly in my old age), playing effectively broad as the students figure out their own paths to adulthood. It’s a bundle of growing pain blues, flamboyant declarations of self, and doomsday faculty foul-ups, and it cooks when delivered in big batches of adolescent passion. Unfortunately, “Dead Poets” lurches for the profound one too many times to make itself heard, often ruining the gorgeous autumnal scholastic mood (there’s flawless campus cinematography here from John Seale) that backdrops the action.

On the bright side, I was impressed with Robin Williams and his smart career move to follow-up “Good Morning, Vietnam” with an equally multifaceted role. His take on Keating’s insatiable educational hunger bandages the movie’s ill-advised third-act ambitions toward dramatic enormity. It was also interesting to observe a bright-eyed Robert Sean Leonard bouncing around as the doomed Neil Perry, after years of watching the actor muck up strong movies with his lukewarm screen presence (the same goes for Josh Charles as the lovesick, impossibly named Knox Overstreet).

As for the alleged homosexual subtext of the film, frankly I don’t see it.

1989: “Renegades” was one of the many missing pieces of the year. I can’t recall why I didn’t pursue this feature with my usual enthusiasm, but I’m sure it had something to do with the dreaded R-rating and the film’s quick death at the box office. I caught up with the movie on VHS soon after, hopeful to find a Sutherland/Phillips pairing that would recall the finer, snappier moments of the brat-pack western, “Young Guns.” Marketed as a picture of punch-happy buddy comedy pizzazz, the film lacked an expectedly organic rowdy spirit. It was drab and unconvincing, trying to manufacture car crashes and violent detours to keep in step with the action genre. Not a terrible film, but an oddly joyless one. 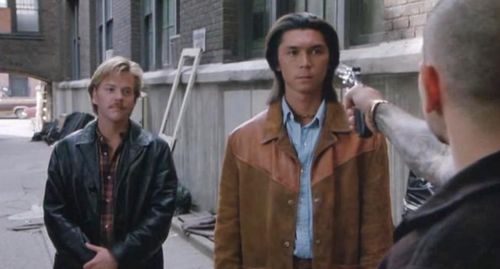 2009: What I found most interesting about “Renegades” the second lap around was Sutherland’s bushy mustache. Mustache! The actor was only 23 years old during filming, necessitating some hasty facial character to toughen up the performance. It’s an odd decorative choice, especially with Sutherland still rocking his baby voice. Nowadays, we’re all accustomed to grim-ass Jack Bauer and his never-ending days of pain. 20 years ago, Sutherland was barely out of diapers and it shows. Still, he delivers a screamy, brawler performance that carries much of the energy within this lackluster picture, especially with Phillips looking justifiably distracted by Jack Sholder’s uninspired direction. Sadly, Phillips isn’t allowed any facial hair to play with, just a series of Native American accouterments and sound cues that border on tasteless.

“Renegades” is a noisy, paint-by-numbers buddy cop film. I spent 100 minutes patiently revisiting the movie, and all I can recall afterwards is the mustache. That damn mustache.

And it's date night/the end of the world.

Hogan Rule!!! 24 inch pythons and his first walk-in music was "Eye of the Tiger." It just dosen't get any better than that. Brian used to dress up like the Hulkster and do atomic leg drops of his couch(not pretty). Eat your vitimins say your prayers and drink 5 raw eggs every morning and you to can end up broke, shrivelled, and dumb.
ROCK ON Brian Orndorf