Zed (Jack Black) and Oh (Michael Cera) are two cavemen who don’t fit in with their tribe. Electing to head out into the wilds of the world, the men go looking for knowledge, but instead find a biblical wonderland where they meet Cain and Abel (David Cross and Paul Rudd), Abraham (Hank Azaria) and Isaac (Christopher Mintz-Plasse), and visit Sodom and Gomorrah, where a king (Xander Berkley) and his fey High Priest (Oliver Platt) hold Zed and Oh’s objects of desire (Juno Temple and June Diane Raphael) as slaves. Fighting tribal malice, the threat of circumcision, and the temptations of a princess (Olivia Wilde), Zed and Oh hope to survive this wicked new world and turn themselves into the B.C. heroes they’ve always wanted to be. Over the last decade, director Harold Ramis has lost sight of his sense of humor. For some of his features, the choice was intentional (2005’s dark misfire, “The Ice Harvest), while the rest (“Bedazzled,” “Analyze That”) revealed a man too comfortable for the world of comedy, forced to live up to his past triumphs with only a modicum of professional hunger. “Year One” keeps the elements simple for Ramis, as writers Lee Eisenberg and Gene Stupnitsky script a broad adventure wide open for celebrity cameos, knowing winks at biblical highlights, and constant one-liners -- along the lines of Mel Brooks’s “History of the World” or Monty Python’s “Life of Brian.” “Year One” has the means, just not the leadership.

With a premise that oddly promises an immense journey for our Stone Age homeboys, “Year One” plays it frustratingly safe. There’s little in the way of cutting biblical humor or significant mockery of primitive cultures. Instead, “Year One” likes to make penis jokes, munch on the aforementioned fecal matter treat, or have the characters urinate on their own faces. It’s a colorless (courtesy of cinematographer Alar Kivilo) renaissance fair of potty and sex jokes that Ramis fails to connect into a gut-busting circus. “Year One” is stillborn, perhaps proudly so, delivering 100 minutes of laugh-free scenarios in a manner that hints at binge drinking during the editing phase of production. 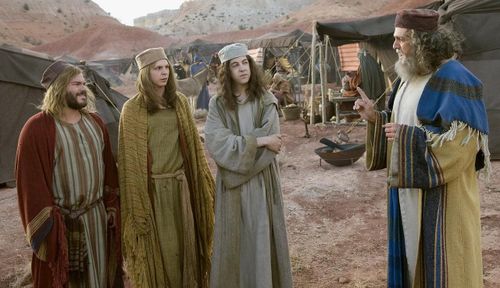 It’s almost cruel to witness so many marvelous actors fail so miserably here. “Year One” parades around many a familiar face, but no one seems able to crack the material beyond elementary school depth. Then again, there’s no one in the cast pushing themselves beyond their established personalities, with Black jazzing around as the fat doofus and Cera still nursing his ironic detachment shtick. Matters go from bad to worse once supporting characters are trotted out, with headaches emerging in the form of David Cross (looking bored as the murderous Cain) and Oliver Platt, who should respect the restraining order the world of comedy took out on him years ago. It’s nice to see the actors feeling game to run wild, yet without any golden writing or direction from Ramis, it becomes a dire case of embarrassing pantomime.

“Year One” retains a pleasurable energy, but there’s nothing to spend the abundance of pace on. Seemingly foolproof, the picture instead buckles within minutes of commencing, leaving Ramis panicked to commit to jokes that aren’t even remotely funny and moldy plotting that goes nowhere. “Year One” is an awkward bust, a raucous costume party held at a funeral, and the more it sinks lowbrow to obtain laughs, the easier it is to bid adieu to Harold Ramis as a trustworthy comedic filmmaker. 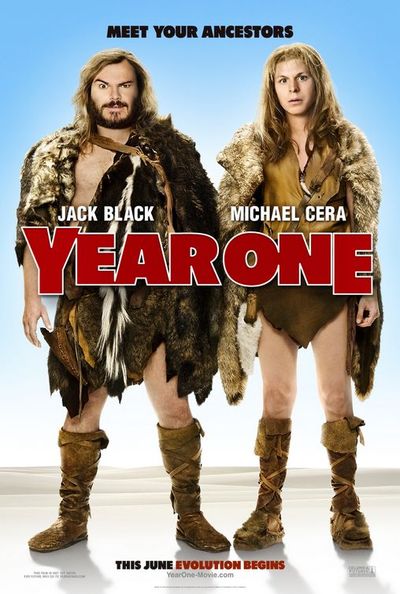 ah I saw the reviews for this on Rotten Tomatoes and it looks depressing, I'm still going to have to see the thing for myself but I wont hold my breath =/ i have the trailer up at www.yovia.com/blogs/timlara it looks funny, we'll just have to see.