I hold severe reservations with “The Taking of Pelham 1 2 3,” and it’s not tied to the fact that this story has now been dragged in front of the cameras on three separate occasions. No, my objection is reserved for director Tony Scott, who once again submerges the hope of thundering screen tension under a thick layer of meaningless cinematographic bells and whistles. Over the last fifteen years, Scott has sacrificed his mojo to pursue an eruption of visual noise and “Pelham,” with its promise of delectable conflict and gritty New York locales, is another wasted effort from the ineffectual filmmaker, who’s become one of the most disturbingly inept stylists working in Hollywood today.

At a subway dispatch desk nursing his wounds after allegations of bribery took away his position of power, Walter Garber (Denzel Washington) maintains the rhythm of New York City by keeping the trains on time. Breaking the routine is ruffian Bernard Ryder (John Travolta), who hijacks a train, demanding the Mayor (James Gandolfini) pay him 10 million dollars to restore order. Appointing Garber as the voice of reason, Ryder develops a rapport with the troubled dispatcher, using Garber’s past shame as a way to intensify the situation. With only an hour to come up with the money before hostages are killed, Garber works with law enforcement officials (including John Turturro) to figure out a way to prevent Ryder from achieving his goals, taking a chance to redeem his tattered reputation and save lives in the process.

“Pelham” originally goes back to the 1973 novel by Morton Freedgood, which was quickly turned over for the 1974 Joseph Sargent screen adaption, the premiere take on this subway hijacking material (a 1998 television movie also exists in the media ether). Suiting up the premise again for a big-budget realization strikes me as a very odd choice for Tony Scott. Not only has the story been bled dry of tension due to repetition, but Sargent’s spare, robust effort is something of a pre-disco classic, showcasing star Walter Matthau at his most delightfully frumpy, backed by a brilliant score from David Shire -- one of the finest compositions of the era. Trying to top previous achievements is suicide for Scott, so the artistically limited filmmaker retreats to his moldy bag of tricks to amplify the material within an inch of its life 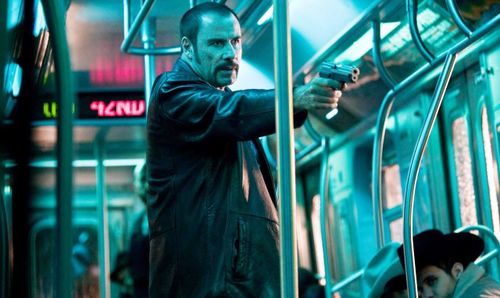 “Pelham” is a minimal crime story, and simplicity is Tony Scott’s kryptonite. Commencing with an underwater remix version of Jay-Z’s “99 Problems,” it’s apparent that Scott a) doesn’t know how to properly butch up John Travolta for tough guy consumption and b) should banish his tone-deaf music supervisor from the industry. From the get-go, Scott is chasing a fragmented mood of urban anxiety and villainy to amplify the New York mood of lawlessness that’s about to unfold, setting up the pawns competently enough to suggest a newfound sense of restraint; unfortunately, it doesn’t last for long. Heck, the feeling doesn’t even make it past the opening credits.

“Pelham” as a convincing visual statement of good, clean thriller fun is where I object the loudest. Arriving with his grotesque armada of dollies, zooms, acid-washed lighting, and cursed step-printing techniques, I wouldn’t be surprised to learn that Scott has purposely made “Pelham” impossible to watch. Granted, Scott’s been hip-deep in visually nightmarish pictures before (“Domino,” “Man on Fire”), but “Pelham” didn’t need the synthetic extension. The compulsory camaraderie shared between Ryder and Garber is enough to sweeten the nail-biting, leaving the swirling camerawork, YouTube-like visual imagination, and predictable snuff-movie lighting distracting. I have no idea what glee Scott derives from his cancerous visual gymnastics, but it once again smothers a promising picture. 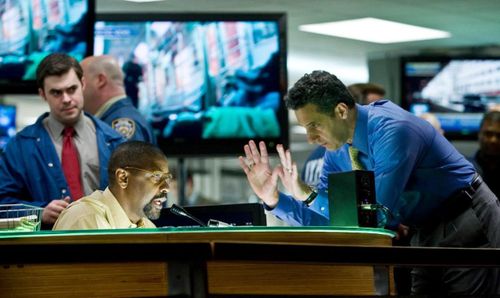 The actors fail to overcome the cinematographic spin cycle, but lordy does Travolta ever try. Hamming it up as the neck-tattoo-wearin’ Ryder, Travolta gets to clomp around swearing up a storm, shooting civilians, and trading philosophical perspectives with Denzel Washington. You can’t blame the guy for treasuring the opportunity to depict an unhinged lowlife. Still, Travolta’s exuberance borders on camp, effectively removing the menace from the character and turning this clever angel of death into a mildly chilling 1st year drama student. I dig Travolta when he’s giving himself completely over to a role, however, his verbal diarrhea and wild gestures of indication here vault over the required sense of the theatrical Ryder should possess. It’s a showy performance that Washington wisely tones down to match. Still, since Scott is playing tetherball with his cameras, I can’t fault Travolta for at least attempting to make a dent in the frame.

The screenplay credited to Brian Helgeland fails to find much of a spine to the central conflict, relying on pieces of modernization (a laptop webcam plays a pivotal role) to spice up Ryder’s end of the story, while Garber and his professional ruin subplot permits Washington some shades to explore (though he’s absurdly bestowed domestic sainthood to wiggle out of any unsavory characterization). Again, it’s a lovely sentiment, but Scott’s realization is a shambles, culminating in a bizarre, inept conclusion that boldly defies logic and betrays everything that’s come before it just to play up a cheap mass transit punchline. 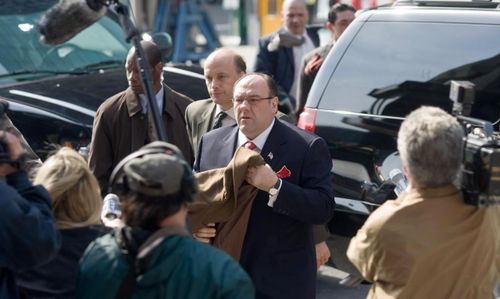 The “Pelham” update is slick as snot, action-heavy (a mid-movie money transfer set-piece is a theme park stunt show via Google Earth), and consumed more with fleeting sparks of tension over a consistent stream of suspense. Like everything Tony Scott has made since 1995’s “Crimson Tide,” “Pelham” would’ve been better served by a handful of Ritalin, or perhaps a director who wouldn’t dare sacrifice rollicking suspense to feed his meaningless camera fetishes. Stick with the 1974 version. It might seem like a still frame compared to Scott’s epileptic shock, but it still retains a sizable, pleasing impact. 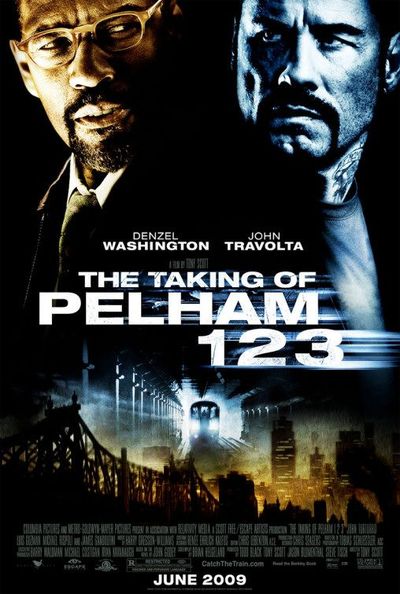