A book publishing executive, Margaret Tate (Sandra Bullock) is a frosty corporate tightwad, running her executive assistant, Andrew Paxton (Ryan Reynolds), ragged with demands and errands. Finding her U.S. citizenship has expired, Margaret is in need of a miracle or else she loses her job and returns home to Canada. Margaret’s hasty plan to remain in the country is to marry a perplexed Andrew, who goes along with the scheme on the condition of a brighter workplace future. Off to see his parents (Craig T. Nelson and Mary Steenburgen) and grandmother (Betty White) in remote Alaska, Andrew takes Margaret along for the trip, sending his prissy boss into the great unknown of a warm family environment. During this trip, Margaret and Andrew are forced to learn about each other in order to thwart the diabolical plans of an immigration agent, leaving the two to build a romance from glares to marriage in three short days.

Through her work on “Step Up” and “27 Dresses,” director Anne Fletcher has demonstrated an incredible knack to turn exciting explosions of attraction into the dullest motion pictures imaginable. She’s a robotic studio filmmaker terrified to inject untested elements into her work, and she’s found yet another bland sitcom with “The Proposal.”

Written by Pete Chiarelli, “The Proposal” is an astonishing piece of hackneyed plotting in search of artistic oxygen to keep itself alive. Fletcher offers little assistance, seemingly encouraging the trite edges of the writing with her mindless directorial gloss, leaving the heavy lifting in the arms of the actors. For what they have to work with, stars Bullock and Reynolds make it out alive, sharing a passable chemistry as they shadowbox the “opposites attract” routine, trading quips and raised eyebrows while they iron out character quirks. Bullock has never been a hefty comedienne, but she’s carried well by Reynolds and his sharp timing, a skill severely missed when Bullock has to generate laughs on her own. The two also share a strange nude scene, which is a convincing argument for their screen pairing, though both are powerless to the sunshine beams emitting from Betty White, here as Andrew’s “grammy.” White steals the movie from the youngsters with her tightly honed gifts for comedy and eccentricity, lending “The Proposal” some much needed bite.

But what to make of Malin Akerman? The “Watchmen” star appears here as Andrew’s former Alaskan flame, who still pines for her lost beau. The character is introduced with a promise of further exploration and possible deployment as a gum-in-the-works figure to tempt Andrew away from Margaret. The arc never comes to fruition, and that’s a missed opportunity. Granted, the choice between stiff Margaret and her thawing nerdom (via a declaration of love for Rob Base -- cue the “It Takes Two” sing-along) vs. perpetual Alaskan pine tree bliss with Akerman is unfair (I vote for the blonde with the big heart), but to have the character presumably cut out to keep the leads within constant reach damages whatever suspense is permitted access by Fletcher. Surely with romantic comedies, the outcome is a foregone conclusion. Through the removal of this potentially interesting roadblock for Andrew, “The Proposal” essentially gives away any hope that logic might win over dreary Hollywood structure. 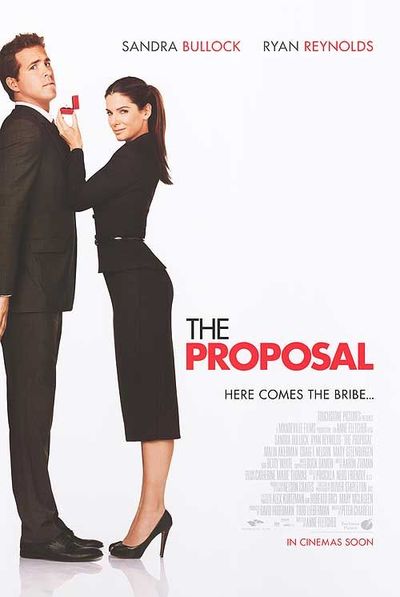