Film Review - The Limits of Control

“The Limits of Control” is an imposing spread of baffling puzzle pieces without any box art to employ as a guide to completion. The film demands attention on a marathon scale, yet rewards the intensive effort with copious amounts of abstraction and confusion, without ever inviting the viewer into this strange world of staring, contemplation, more staring, existentialism, and painfully elongated idiosyncrasy. Writer/director Jim Jarmusch has lumbered down this road of premeditated obscurity before, but never this ineffectively. “Control” is trying much too hard to play it perfectly cool.

A criminally minded Lone Man (Isaach De Bankole) is sent to Spain on a mission that’s never exactly clear. Spending his time methodically carrying out personal rituals of coffee consumption, museum exploration, and Tai Chi meditative practices, Lone Man waits for his contacts to arrive (including Tilda Swinton, John Hurt, and Gael Garcia Bernal), feeding him codes (sent via matchboxes) to help further him along. While pokerfaced and intensely focused on seclusion, Lone Man finds these strangers open up to him with vast confessions of existential dread, creating a tableau of personalities (always sporting sunglasses) and locations that Lone Man must navigate carefully during his unspecified time in Europe.

“Control” is an undemonstrative mind-game, a determined mystery that makes use of symbols, repetition, and silence to corral a statement on the world of art and business. Jarmusch employs the science of meditation as his compass for the film, taking nearly two hours of screentime to unfurl this conceptual beast, dragging from scene to scene as if blind to the notion of appreciable connective tissue. To amplify the stillness, Jarmusch has also decelerated his traditional snail’s pace even further to permit the viewer sufficient opportunity to soak up the myriad of make-em-ups and glares that curse the viewing experience.

Certainly film scholars and Jarmusch fanatics will have a field day pouring over the details the director has arranged with perhaps minimal forethought. I don’t reject the layers of meaning and the potency of the symbolism, only Jarmusch’s reluctance to engineer a hook to the proceedings worth salivating for. Watching De Bankole in sharp suits wander around Spain, greeted by eccentric philosophers and nudity (embodied by Paz de la Huerta), and ingesting a series of inexplicable paper codes is a fine proposition for 30 minutes. Once past the quarter mark, Jarmusch tends to repeat his moves both intentionally and unintentionally, losing himself in the magic of minutiae and impenetrable minimalism. It’s an annoying affliction that somehow failed to toast Jarmusch’s similarly patterned 1995 tone poem “Dead Man,” making “Control” much more of a frustrating sit than an automatically disregarded one. The wheels are clearly turning on this feature, yet they only spin the material in circles.

Shot with painterly precision by Christopher Doyle and scored with valuable bits of bass-heavy rumble (often the film’s only indication of conflict), “Control” tucks beauty into the corners of the film while pursuing a mammoth brass ring of artificiality. This is not a hollow motion picture, just an inert one, displaying a puzzling atlas of abstraction that seems sincere enough; there’s just not a single reason to care about any of it. 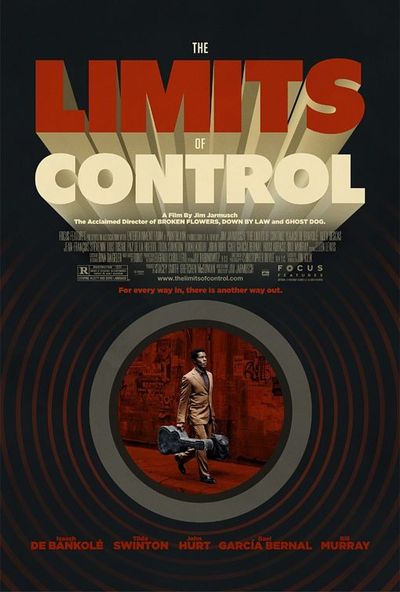