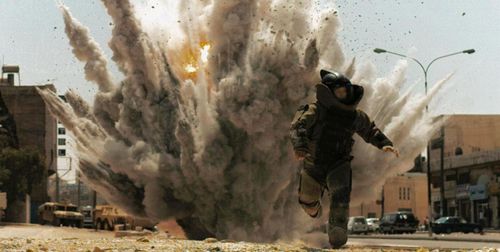 After losing a member of their team to a roadside bomb, a U.S. Army Explosive Ordnance Disposal unit, comprised of Sergeant J.T. Sanborn (Anthony Mackie) and Specialist Owen Eldridge (Brian Geraghty), brings Staff Sergeant William James (Jeremy Renner) aboard to help continue the job of clearing out numerous explosive devices throughout Iraq. A danger junkie, James runs his own brand of nervy bomb detection, often brashly running towards certain death to test himself -- to feel something while performing what amounts to a suicidal mission. Faced with 38 days until their tour is over, the trio travels around the country responding to calls, only to face their worst fears while staring into the face of certain death.

Bigelow, best known as the director of “Point Break” and “Strange Days,” approaches “Hurt Locker” like the ultimate suspense piece. Working with a script by journalist Mark Boal, Bigelow is on the prowl for cracking screen tension through the eyepiece of reality, pitting man against explosive in the center of the Iraq inferno. It’s a controversial choice to employ acceleration while surveying misery, but Bigelow handles the workload with outstanding grace. “Hurt Locker” plays right into her wheelhouse, presenting numerous opportunities to inflame the audience with traumatic depictions of bomb-defusing gallantry, while simmering in the inherent mental erosion of the gig; it’s a frightening cocktail of life and death that establishes itself as the impetus for the James character, who, faced with obligatory domestic tranquility back home, would rather test himself with explosives, addicted to the rush of diffusion.

For the first hour, “Hurt Locker” is nearly a road picture, following the soldiers as they meet up with military officials and mercenaries (Ralph Fiennes, Guy Pearce, Evangeline Lilly, and David Morse cameo), marching into treacherous situations that require a veiled perspective of morality. Here, Bigelow finds a particularly kinetic vein to bleed, backed by strong, zoom-heavy camerawork from Barry Ackroyd. Pushing the audience into the line of fire, Bigelow unflinchingly communicates the daily schedule of fighting a faceless menace, with the EOD squad not only confronted with numerous bombs, but also stern Iraqi onlookers, who contribute to a mood of paranoia that further clouds the rules of engagement.

The second half of the picture decelerates toward introspection, as the men struggle to fend off a mild case of madness, with James bonding with an Iraqi boy to cultivate a feeling of comfort. It’s a tough prospect to go from pure suspense to sludgy psychological study; Bigelow decompresses “Hurt Locker” with tremendous care, but scenes late in the game tend to run on longer than necessary. Chalk it up to love, since Bigelow shows such admiration for these complicated men and their tempestuous sense of fragility, stuffed firmly behind their military training. The third act has the characters confronted with their harsh Iraq realities, and while it fails to provide the same electric charge of the first 60 minutes, “Hurt Locker” glides to an appropriate, respectful conclusion. 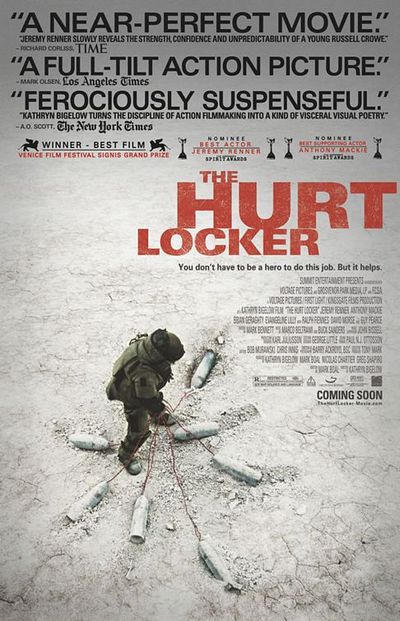