A gruesome murder has occurred in a small town. Called in to lead the investigation are FBI Agents Hallaway (Bill Pullman) and Anderson (Julia Ormond), who find themselves instantly resented by the bumbling local cops (including Michael Ironside). Dealing with three sets of unreliable witnesses, the Agents deploy their specialized training to corral clues leading to the identity of a masked killer. Trying to separate fact from fiction, Hallaway and Anderson press down hard on the witnesses, finding a case of murder is only the tip of the iceberg when it comes to local criminal activity.

Jennifer Lynch, perhaps best known as David Lynch’s daughter, shares a fascination for enigmatic, abstract behavior with her father. While “Boxing Helena” was a full-bodied homage to the dominant Lynch gene of obsessive destruction, “Surveillance” holds back on the vast statements of psychosis. Lynch is writing a crime story, taking a singular event of bodily trauma and dividing the perspective three ways: through a pair of corrupt cops (French Stewart and Kent Harper, who co-scripts), a family on a road trip (including Cheri Oteri and young Ryan Simpkins), and two giggly junkies (Pell James and Mac Miller). It’s a contained, B-movie idea that requires little in the way of locations and cinematographic flamboyance, and Lynch holds to the simplicity, with long passages of the film regulated to lonely interstate violations of power and police station interrogation examination.

However, things do get gruesome in a hurry. In recalling the day’s events, the characters experience some heavy acts of violence that color their memories, blurring the case further. Much like her father, Jennifer Lynch is partial to outbursts of gore to keep her audience invested in the mystery, and while it takes some time to settle into a groove, “Surveillance” reaches an interesting pitch of horror in the second half that’s well executed and suitably disturbing. Of course, it’s buffered by bumpkin characterizations of local cops and a set design that recalls “Twin Peaks,” but it’s communicated with that comforting, world-famous Lynchian sense of humor (askew and boundless). It could easily read as amateur hour to some viewers, but the direction is confident enough to fence in the thick slices of ham that creep into the fabric of the film.

If Jennifer Lynch wants to make David Lynch movies, more power to her. “Surveillance” is flawed approximation of the elder Lynch’s work, but it settles into a reasonably lurid ambiance that generates some laughs, scares, and a whole pile of puzzled looks. 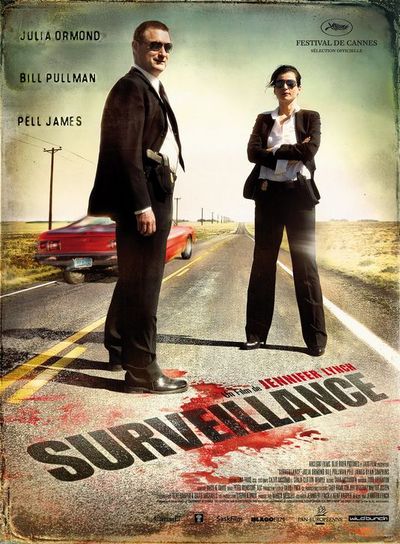