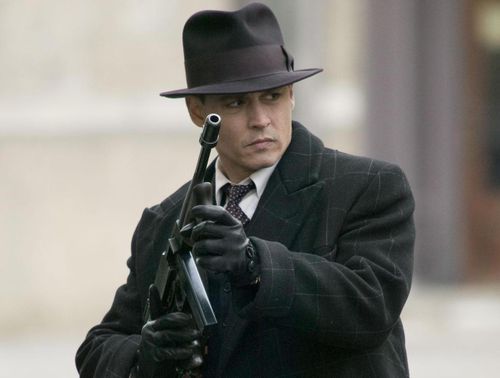 With a nation in the throes of the Great Depression, John Dillinger (Johnny Depp) and his band of thugs (including Stephen Dorff, David Wenham, and Jason Clarke) built a name for themselves as they tore across the Midwest, robbing banks to line their own pockets. On their trail is Melvin Purvis (Christian Bale), a determined FBI agent appointed by J. Edgar Hoover (Billy Crudup) to stop Dillinger by any means necessary. Settling around Chicago, Dillinger finds love with coat check girl Billie (Marion Cotillard), who’s swept up by the crook’s declarations of protection. Hoping to keep a low profile, Dillinger’s antics and eventual betrayals attract the attention of the swarming G-Men, putting the criminal on the run and his personal associates in danger of arrest. 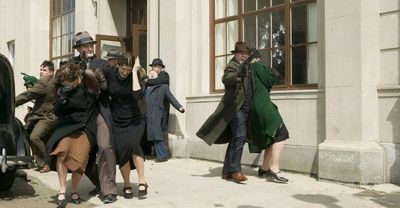 “Public Enemies” is stuck in neutral and it’s difficult to isolate the primary flawed component of the picture. There’s so much inertia and crummy decision making in play here, reducing “Enemies” to a 140-minute-long countdown to nowhere; a film blessed with a massive budget to go damn near anywhere it pleases within a neglected genre, and Mann picks a dead air, faux-cerebral approach to dramatize the (sorta) life and times of John Dillinger. We’ve waded in these murky aesthetic waters before with “Miami Vice” and “Collateral,” but never this unproductively. Mann is lost at sea with the “Enemies” world, caught between the need to connect a respectful history of Dillinger and his own arid meditations, which I suppose are meant to pass for meaningful contemplation.

Perhaps the largest single artistic thumbprint of worry is Mann’s use of HD camerawork. While I applaud the director’s elaborate commitment to avoid a Bogdanovich route of painstaking, era-specific lensing decoration, the slick, smeary cinematography on “Enemies” rips the spine right out of the material. Mann pours salt on the wound by insisting on a tipsy hand-held approach, which turns an A-list Hollywood blockbuster into something resembling a junior high weekend class project from the St. Francis School for Troubled Boys. Mann shoves his lens millimeters away from the faces of the actors (Depp and Bale’s nostrils should demand above-the-title billing), losing their crucial reactions in the inky darkness, and cruelly bounces the rubber camera around to remind audiences that we’re watching cutting-edge technology covering ancient criminal behaviors. It’s a thin-ice proposition to call out legendary cinematographer Dante Spinotti like this, but “Enemies” looks atrocious, and worse, excruciatingly obvious. There’s meticulous Depression-era production design everywhere that’s wasted while Mann counts the pores on Depp’s face. 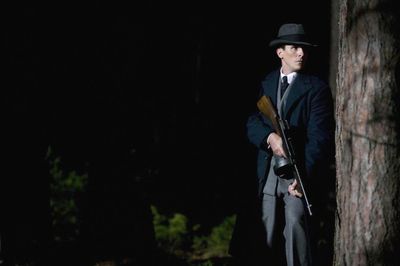 Mann also fumbles the psychological tints of the screenplay. Cherry picking moments from Dillinger’s life to assemble a workable narrative, “Enemies” rarely levitates off the ground, tracking customary love story beats to offset the mummifying procedural atmosphere in Bale’s neck of the woods. The interaction between Dillinger and Billie is never authentic, and Depp and Cotillard share little chemistry to help sell the heat. Depp is superior with his contents-under-pressure role, but there’s no crack in the fence of arrogance to peek through to better understand this anti-hero Mann is hungry to celebrate. Neither a Robin Hood figure (the script sniffs around a weird moral code, but never follows through) nor a breathtaking criminal mastermind, Mann depicts Dillinger as a first in a long line of media-born stars, where a legacy was crafted through headlines and newsreels, much to the gangster’s delight. Again, Depp can do cocksure in his sleep, but Mann never squeezes Dillinger tightly enough to provide a reason to invest. Over two hours of staring from Depp and Bale gets old in a hurry. Those sticking around for red hot bank robbing action should be aware that Dillinger’s criminal calling card eats up, at best, ten whole minutes of the movie. The rest of the action is articulated through repetitive shadow play gunfights that showcase Mann’s technical expertise, but only if you’re a diehard fan of meticulous muzzle flashes.

All gloss, playing at times like a parody of the gangster movies it looks to emulate, “Public Enemies” adds up to shockingly little in the end. Historically, I’m inclined to disregard it as one-dimensional hero worship. Dramatically, it’s a flat tire; a routine of G-Men chasing down gangsters without the benefit of a captivating perspective or even the faintest sign of an emotional invitation. Visually, “Public Enemies” is pure, reckless masturbation, picking exhaustive immediacy over needed finesse and restraint. For those expecting a chic thrill ride of cops and robbers, “Public Enemies” is not that picture. It’s not really any sort of dramatic feature, but merely an empty vessel for Michael Mann to spin furious circles, shedding much of the vanguard appeal that once came so easily to him. 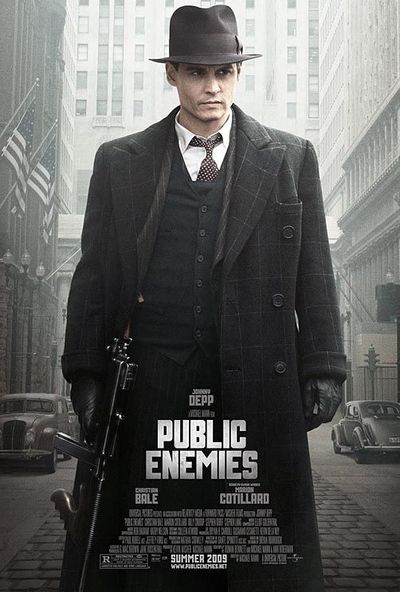 Absolutely ludicrous.
I suggest you switch your brain on before rewatching the film.
Then give up on your career as a reviewer as you`re clearly not up to it.

You said the exact same thing I said when I left the theater. You are completely correct, this film was very disappointing, I gave in a 4/10. Its amazing, the thing about the nostrils is what I said, exactly, haha the film was horrible.

I was completely delighted when you brought up his use of the high def camera. As a professional photographer who uses both medium format film and medium format digital, I found the cinematography completely distracting. I said outloud in the theatre, "this looks like it was shot with a camcorder", with audience members shooshing me and my wife nudging my kidneys with her elbow.

Most of the film was filmed fine but the end was the most noticeable and distracting during Dillenger's death. I honestly think that the director or DP incorrectly exposed the scene and did a terrible job of trying to cover it up.

I read that the director intentionally underexposed many scenes b/c his 'high tech' camera could pick up details in the shadows, but this seems like a cover up and he's too embarressed to have the actors come back for a reshoot (or afraid that Bale will flip out again like he did in Terminator).