In the future, Earth’s energy needs will be filled by Helium-3, a substance harvested through lunar rocks at an off-world facility overseen by Sam Bell (Sam Rockwell) and his robot assistant Gerty (voiced by Kevin Spacey). Nearing the end of his contract with his Earth employers, Sam looks forward to rejoining his wife and daughter after years away. Out on a routine mission, Sam experiences hallucinations that end up crashing his Lunar Rover. Awakened back at the base, Sam discovers an irritable doppelganger preparing for duty, with Gerty unwilling to provide proper answers to Sam’s urgent questions.

In many ways, “Moon” is a throwback sci-fi event, invested in areas of storytelling patience and weighty psychological investigation that are rarely welcomed anymore when traveling beyond the stars. “Moon” treks cautiously, coolly attempting to manufacture a suffocating aura of brain-squeezing suspicion as Sam is overwhelmed by the revelations uncovered when he reawakens, probing deeper into his seemingly mundane existence as a lonely lunar jockey.

Employing a striking production design that merges genre standards of futureworld decoration with tight, bright white confines that encourage the confusion, “Moon” is a dazzling film to behold. Jones confidently maneuvers around the lunar locations with the help of seamless, deceptively simple special effect techniques and a contemplative screenplay that’s more concerned with building unexpected passages of tension than traditional shock routines.

“Moon” is truly a modern horror film, eschewing a tiresome slasher mentality to explore the very nature of identity and the perversion of human life through advances in science and corporate skullduggery. The film doesn't sermonize, it observes and cherry picks incoming malice, watching Sam work through his complex emotions as he confronts his reality as a crude utility.

The picture does suffer from slight “Twilight Zone” trappings that exhaust the running time, and perhaps Jones aims to achieve definitive profundity with a severity that's off-putting. Cast the little nagging bothers of the film aside and what's left is fairly wonderful stuff. “Moon” clutches the viewer firmly early on and slowly tightens the noose as Sam swims through his eroding doubt. The role is beautifully played by Rockwell, who nails every square inch of bewildered response available to Sam as he confronts his purpose. Support is handled with spooky calm by Spacey, who infuses Gerty with a chilling sense of soothing robot loyalty and procedural unease. The performance is matched by the disturbingly reassuring design of Gerty: a bulky mechanical friend with a smiley face display up front and unspecified company man programming within.

Where Sam takes his paranoia will remain behind tight spoiler doors. Rest assured that Jones is respectful to Sam’s philosophical concerns and to the needs of a satisfying cinematic conclusion. “Moon” is a clever, captivating addition to the (mentally) lost in space genre, taking audiences to the farthest reaches of the galaxy while scripting corporate horrors perhaps too close for comfort. 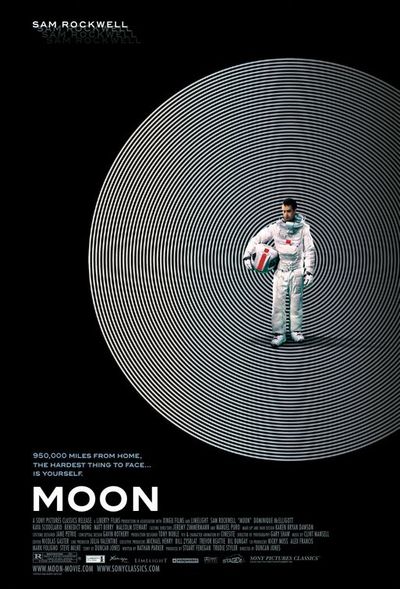 Couldn't agree with you more on this one, Brian. A well-written and spot-on review.