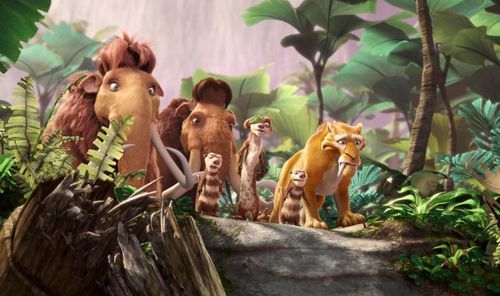 Now an improbable herd, Sid (voiced by John Leguizamo), Diego (Denis Leary), Crash (Seann William Scott), and Eddie (Josh Peck) are getting ready to settle down as they await the birth of Manny (Ray Romano) and Ellie’s (Queen Latifah) first child. Feeling an uninvited vibe, Sid wanders off, stumbling across three dinosaur eggs that he assumes a motherly responsibility for. When the actual dinosaur parent shows up to retrieve the now-hatched offspring, it sends Sid and the babies to a world underneath the ice where dinosaurs and dangerous plant life have survived. Off to retrieve their dim-witted pal, the herd comes across Buck (Simon Pegg), a weasel who roams the underworld on the hunt for the massive dinosaur that took his eye. With Buck as their guide, the herd enters the dino world to rescue Sid, hoping Ellie holds off on labor pains until they can return to their frozen world.

What felt so forced, unpolished, and derivative about 2002’s “Ice Age” has been successfully smoothed out during the last two sequels. “Meltdown” turned botched whimsy into a colorful community atmosphere, inviting more characters and humanity to inform a concept that was almost strictly played for tiresome gags the first time around. For the first 15 minutes, “Dawn” endeavors to shake the plot up, sniffing around for something suitably dramatic to coerce the actors to return. The result is a lethargic pass at third-wheel motivations for Diego and Sid that feels harshly manufactured to give the screenwriters something to do. Thankfully, “Dawn” quickly waves off the needless psychological obstacles once the dinosaur adventure begins, settling down to resuscitate old charms and introduce a wonderful new character. 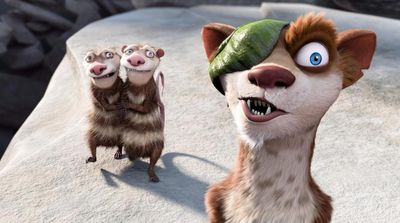 Pilfering cues from Arthur Conan Doyle’s “The Lost World,” “Dawn” takes the 3-D lead and targets a lively adventure inspiration, plunging into the dino landscape to permit the characters a chance to run through numerous slapstick and action situations. With personalities firmly established, directors Carlos Saldanha and Mike Thurmeier hand “Dawn” over to the colorful locales, dangerous predators, and adorable infant dino shenanigans. The picture doesn’t strain to find a higher purpose to justify itself, and the absence of responsibility permits the movie to, gasp, have some fun with itself. Call it one-dimensional, but it’s never lazy. “Dawn” enjoys an environment of comfort, allowing the characters to interact without the burden of overt growth. Freshness is actually encouraged by the introduction of Buck, a comedic hunter with a leaf eye-patch who’s been lurking solo in the lost world for one too many years. The ensemble of voices makes for a silly good time, but Pegg elevates the material with his take on Buck’s simmering madness and swashbuckling, weasel-elastic heroism. He’s a welcome addition to this cornucopia of animal neuroses.

“Dawn” flies high on the back of birds, swings low with treacherous dino-bone-bridge challenges (one involving laughing gas), and provides some more time with everyone’s (excluding me) favorite punchline, the diminutive, nut-lovin’ Scrat. “Ice Age: Dawn of the Dinosaurs” is certainly a familiar cocktail of cartoon accomplishments and luxurious CG vistas, but a cozy one, confident with its brand of humor. The simplicity is refreshing, opening the film up to hundreds of smaller pleasures and laughs, keeping the franchise on solid, inviting ground. 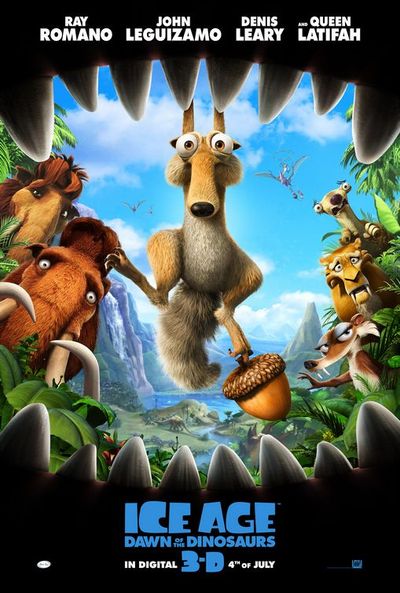