Eager to start a family, Madeline (Jordan Ladd) is pregnant with her first child, trying to land a suitable birthing method for her baby, much to the chagrin of her controlling mother-in-law, Vivian (Gabrielle Rose), who demands traditional hospital attention only. Finding a place with midwife Dr. Patricia (Samantha Ferris), Madeline’s life is soon shattered when a car accident kills her husband and her unborn child. Determined to carry the fetus to term, Madeline is presented with a miracle when the baby, Grace, is born dead, only to spring to life moments later. Now back home caring for Grace, pushing outsiders away, the new mother finds her baby exhibiting strange behaviors, attracting flies, and refusing the consumption of breast milk, preferring the taste of human blood.

“Grace” appears as such a simple construct, yet it’s a complex sensory piece that preys deliciously on the innate fears of pregnancy and motherhood, punching with a little more of a left hook than, say, “Rosemary’s Baby.” Writer/director Paul Solet organizes the mystery with the vivid dimension of a Dario Argento film, using unnerving environments and squishy textures to explore Madeline’s mounting distress. It’s not the same baroque formalism typically found in Argento’s heyday, but Solet finds a comparable throb of tension, often through the accentuation of the calmly grotesque.

Solet aims for claustrophobia and unease with “Grace,” finding proper mileage with Madeline’s gentle motherly instincts, which slowly dissolve into panic, ending up in a strange gray area of maternal protection. While the fringes of the psychosis are an inch or two outside of Ladd’s acting range, the performance carries proper degrees of disbelief and acceptance, particularly when Madeline starts to comprehend Grace’s thirst for blood. As an undercurrent to all the infant insanity, Solet introduces themes of veganism and animal cruelty to amplify Madeline’s eventual carriage ride over to the dark side of survival, while also using the alternative lifestyle to further articulate the character’s comfort with Dr. Patricia, a former lover who still pines for Madeline, watching helplessly as she’s washed away to heterosexual shores.

If a blood-feeding baby wasn’t enough, Solet turns “Grace” into a psychosexual hailstorm for the final act, dialing up the anxiety as Madeline endures a creepy breast pump encounter with Vivian’s doctor; the frosty mother-in-law even makes her own play for Grace by reawakening her mothering mechanics at 60 years of age. Solet endeavors to make the audience as uncomfortable as humanly possible with the near silent images of clinical invasion from lascivious minds, and I adored the way “Grace” made me feel like I needed a shower after watching. It’s salacious note of sustained discomfort that can’t be beat.

“Grace” is profoundly disturbing, a chilling motion picture that shows an invigorating amount of imagination and wicked behavior, immediately vaulting it above most horror product. 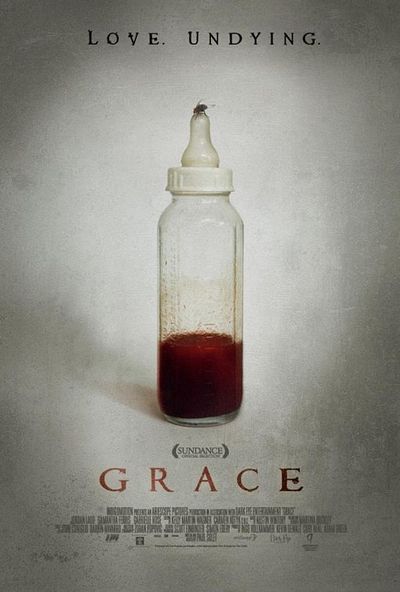 There's no way in hell I'm ever watching this.