On an eagerly anticipated Easter vacation trip to a remote mountain cabin, a group of medical students are impatient to let loose with a weekend of beer, snow antics, conversation, and love connections. Instead, the gang meets a stranger who warns them of a deadly curse pertaining to a vicious Nazi brigade, who died in the mountains 60 years ago after the locals were tired of the enemy stealing their gold. Blowing off the warning, the group returns to partying, soon finding a box of jewels and coins they immediately start playing with. Of course, this raises the interest of nearby undead Nazis, who awaken from their frozen graves to violently retrieve their prize from the terrified students.

Obviously huffing the fumes of Sam Raimi and Peter Jackson, director Tommy Wirkola has set out to create a bloody, brutal horror comedy as an offering to the genre gods who’ve entertained him since he was a teenager. Wirkola (world-famous for “Kill Buljo,” the Norwegian parody of “Kill Bill” -- what, you’ve never heard of it?) is passionate about his gore, and the enthusiasm motors “Dead Snow” as far as one-dimensional fanboy lust will allow. However, as much as I enjoy an occasional applause-worthy display of limp-ripping, I believe Wirkola needed to spend a little more time on his characterizations, which fall too easily into lazy traps of cliché (a medical student who hates the sight of blood) or post-modern wink (one of the group is an overweight, loud-mouthed horror film fanatic). Instead of creating an endearing mess of cowards and warriors, the screenplay blindly traces from established blueprints. Wirkola is playing it safe to appeal to die-hard fans of the genre, refusing the wonders of a plump cinematic challenge that might’ve nudged “Dead Snow” into greatness. After setting up the characters, even sending one away into the mountain rage on a snowmobile, “Dead Snow” unleashes the Nazi zombie wrath. This means oodles of spurting wounds, beheadings, and various matters of reveal concerning Wirkola’s favorite internal organ: the large intestine. He even employs zombie gut rope as a safety line when one of our heroes manages to fall off a cliff. The symphony of viscera is wholly impressive (though augmented by lousy CGI), with the zombies and students sent through a gauntlet of bodily trauma and near death scrapes. Gore is dumped by the truckload throughout “Dead Snow,” beautified by the epic snowscapes, a Norwegian death metal soundtrack, and bravely choreographed daylight pandemonium.

But is it funny? “Dead Snow” would like to consider itself an “Evil Dead” descendent, merging brutality with shockwaves of dark comedy and outright homage; unfortunately, Wirkola simply doesn’t have the chops to bring the material to a comedic boil, and the seesaw between silliness and tragedy tends to infuriate the more the film careens out of control. It leaves “Dead Snow” conceptually flaccid and wasteful. It’s a gorgeous looking motion picture, but with such an outlandish premise, solid gold genre guide rails to lead the way, and the rare appearance of snow in a horror picture? Surely there’s more stirring adventure to be had than the mediocrity Wirkola harnesses and regurgitates with “Dead Snow.” 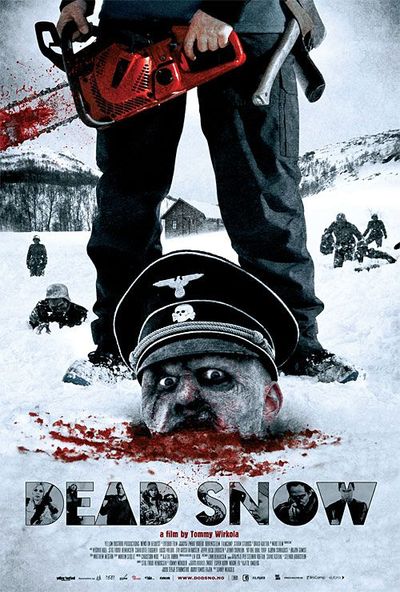