Film Review - Away We Go

Last winter, director Sam Mendes probed the ghoulish shades of marital woe with “Revolutionary Road,” a bracing, bitter pill of a drama that sternly underlined the fury of decayed commitment. “Away We Go,” debuting only a mere seven months after “Road,” takes a much kinder observational post. A story of a struggling relationship on the verge of solidifying through addition, “Away We Go” aims to humanize the universal fears of parenthood and commitment, using the structure of a road trip comedy to alleviate the suffocation that would normally squeeze tight a tale of domestic doubt. It’s Mendes attempting to lighten up his oeuvre, and the newly awakened tenderness suits him just fine.

Faced with the impending birth of their first child, unmarried couple Burt (John Krasinski) and Verona (Maya Rudolph) find their plans for community stability ruined by relocating parents. Eager to find a new home for themselves before the baby arrives, the couple travels around the U.S. and Canada visiting friends and family, hoping to locate a cozy spot to live and raise a baby around people they love. Plans drastically change when the tour faces mounting hesitation, revealing acquaintances to be boorish pigs, emotionally wounded souls, or parenting monsters. Bert and Verona confront the cold reality of their lives for the first time in a long time and find their love tested by the corrosive visits, which puts hope for a bright family future in serious doubt.

I suppose describing “Go” as light is somewhat misleading. While outright emotional bleakness has been shooed away, the film still retains a melancholy that shadows every step forward for Burt and Verona. Scripted by married couple Dave Eggers (author of “A Heartbreaking Work of Staggering Genius”) and Vendela Vida, “Go” emerges from a vulnerable place of questioning and alarm, using the conceit of an impending birth to put the lead characters to the test as they fret about the future of their family and their own self-worth. It’s an effective, methodical twist of conscience that Mendes manipulates handsomely through two soothing performances from Rudolph and Krasinski, plumbing the depths of uncertainty without melodramatic thrusts or overt manipulation of conflict.

It’s a widescreen pastiche of friends and family on the road of realization for Burt and Verona: traveling to Phoenix to convene with Verona’s former colleague and marital/parental nightmare Lily (Allison Janney); to Tucson to catch up with Verona’s gracious and encouraging single sister Grace (Carmen Ejogo); north to Wisconsin to have an infuriating dinner with Burt’s stifling, grotesquely permissive cousin LN (Maggie Gyllenhaal); over to Canada to greet the adopted, loving brood of former college classmates Tom (Chris Messina) and Munch (Melanie Lynskey); and abruptly south to Miami console Burt’s brother (Paul Schneider) during an emergency situation.

Eggers and Vida wield the degrees of intimacy and behavior marvelously, juxtaposing the animated journey of faces and places with Verona and Burt’s own divisions on the importance of marriage and the sacrifices of personal success, urging the couple through uncomfortable spaces of confrontation and dependency to help find their true center of peace. What sours me on “Go” to a considerable degree is how the screenwriting and direction tends to rely on overtly precious interaction between the couple to communicate a warmth that’s already evident. Perhaps it’s a token of distraction to keep the film buoyant and cheeky through troubling detours into matrimonial discontent, but it’s layered on thickly and often irritatingly, establishing feigned sentiment to a film that seems extraordinarily comfortable with instinctive displays of personal expression.

“Away We Go” settles on the notion that home is a place not manufactured by demand, but developed through the complexities of relationships and rigid self-examination, founded in the bonds of memory and trust. It’s a lovely attitude in an engaging dramedy, and I hope Mendes has a few more of these within him before he lurches back to the dark side of human behavior. 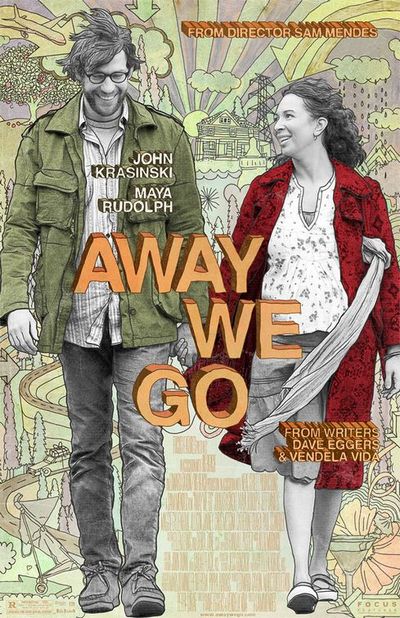