Shot four years ago, “All the Boys Love Mandy Lane” has been trapped in theatrical release stasis and it’s pretty easy to see why: the picture is dreadful. Cluttered with obnoxious CW-scented teen characterizations, cartoonish parades of clumsy adolescent lust, and fruitless stabs of suspense, “Mandy Lane” is a rotten idea all around, sluggishly executed by director Jonathan Levine, who went on to infuse his dismal 2008 feature “The Wackness” with the same hot flashes of irritatingly exaggerated behaviors and self-conscious filmmaking accouterments.

Returning to her junior year of high school, Mandy Lane (Amber Heard, “Pineapple Express”) has blossomed into a gorgeous young woman, leaving the majority of the student body in heat when she walks by. Abandoning her nerdy male best friend for a popular clique, Mandy is ushered into a world of promiscuity, drugs, and jealousies that force her to fight to preserve her virginal purity. Off on a party weekend to a remote farm, Mandy and her boorish friends encounter a series of strange occurrences and disappearances, with a suspicious ranch hand (Anson Mount) keeping an eye on the group from afar. Still wallowing in the chemical excess, the teens find a stranger picking them off one-by-one in the night, leaving Mandy to process the panic and plan her escape.

Though crafted with a customary slasher film mentality, “Mandy Lane” is more captivated with the rice paper psychology of its nauseating characters. This being Levine’s first feature film, there’s an aggravatingly permissive behavior with the cast on display. Levine relies on these brutal acting novices to convey an impression of juvenile excess and teen superiority, using long takes of the cast feeling around the dialogue to sniff out their own sense of reality to the scene. Trouble is, nobody here can act, and the loose atmosphere encourages the ensemble to demand shadings that aren’t there. Screenwriter Jacob Foreman is more interested in beating this teen shallowness into the ground instead of intricately tying interior discontent to the squeeze of peer pressure. The dialogue is often contrived and bellowed like a sitcom, treating the characters like cartoons to make obvious points.

Of course, with a low-budget, an abysmal cast, and a first time filmmaker, there’s going to be a twist to the material. Levine reveals his cards early on, ruining the surprise to a certain extent, rendering the actual running time a long countdown to a foregone conclusion. However, scares and depth seem to come secondary on Levine’s list of priorities with “All the Boys Love Mandy Lane.” More interested in ogling Heard, providing a forum for miserable screenwriting, and testing out overused visual decoration, Levine never challenges the genre, instead resting contentedly on a cinematic endeavor we’ve all seen a thousand times before. 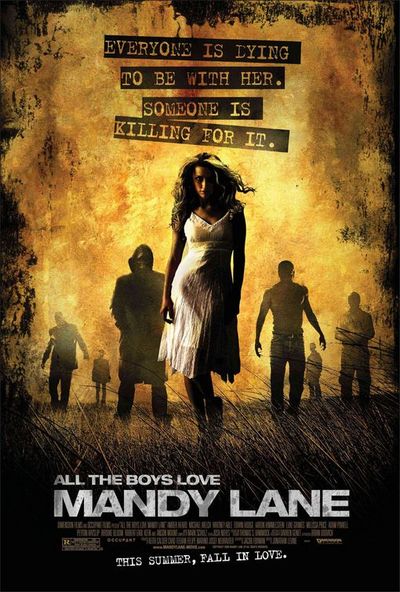 I've been wanting to see this so bad, but not really after I read your review. Where the hell did you see this? I want to see it! lol

I really, really disliked this movie.

And let me expand on that comment a bit further by repeating what I posted back in February.

Like Behind the Mask: The Rise of Leslie Vernon, I felt this film was overhyped and I came away disappointed AND I felt that it could have had a much better ending.

Some of the things I did not like about the film was the way it was shot. I know they are trying to breathe life into what is basically just another slasher. But the camera techniques and what-not were better left for smarter movies. None of the characters were likable. Not that this really matters, I guess, but wouldn't that be a stretch for a teen slasher - likable characters. They focused so much on the sex, drug use and back-stabbing nature of all of the characters that I wanted them to die at the hands of a killer I disliked even more. I could expand on some of this, but I don't want to spoil anything. But for those who have seen it, my issue is that the motivation for the killings was DUMB.

For the good. Well, the lead chick was easy on the eyes and showed a little range. The fact that the black guy was not treated like "the" black guy and was actually shown to be identical to his peers was refreshing. It looked nice. Hmmm. Other than that, it was just a slasher with one of the most predictable twists I have seen. You could tell in the first 10 minutes what was going on.

Oh, the gore. For anyone wanting a gory slasher, don't let the few reviews out there fool you, it is NOT gory. Some of the kills are violent, but not what I would call gory.

To sum it up, I was quite bored with the movie and once again, fail to see how come it is getting high marks from horror sites, although I have my guesses. But it does get some points from me for trying to offer a bit of style to an otherwise bland slasher.

Oh yeah, maybe it is because I am older, but when they used the Go-Go's song to show a bit of the high school, the first thing that came to mind was that I was watching an episode of Cold Case Files :).

Dammit! I forgot to add how this movie could have ended BETTER!

BEWARE THE SPOILER THAT STARTS NOW!

They should have had the killer be the guy who jumped in the pool. Revenge or some shit against Mandy and her new friends. The two twists they could have used would be to make it look as if her best friend was doing the killing the entire time, but at the end, have him killed by the guy who jumped in the pool, showing that her friend had only followed to spy and make sure Mandy was ok.

Then, to further the twist, show the reason why Mandy was not into any of the boys that were after her was because she was in fact, gay. Have the final two survivors be her and another female she has had a crush on. Make slasher history as the two fall into a bloody, passionate kiss after they somehow dispatch of the jock killer, Now THAT would be an ending I would have rather seen.

END OF THE SPOILER

Come on Brian, what do you think? My ending was much cooler, huh?