Reliving the Summer of 1989 Diary - Week One

The excitable 1980s gave birth to numerous high-profile summer moviegoing seasons, most notably during 1982, 1984, and 1989. This was a pre-internet time of cautious optimism (as opposed to today’s unyielding cynicism), where the neighborhood movie theater was hallowed ground for Hollywood’s double-barrel releases, comfortable in the delicious, perfectly measured swell of old-media hype from magazines, newspapers, and in-theater marketing. Also, there was this miracle known as release schedule breathing room, where one or two pictures would snatch up multiplex space every week, and not the usual five we all endure these days. There’s not much to romanticize about the ‘80s (outside of Duran Duran), but those exceptional movie seasons still sparkle after all these years, due in great part to the plethora of talented professionals who were delicately honing their mastery during the era.

While 1984 (the summer of “Ghostbusters,” “Gremlins,” “Indiana Jones and the Temple of Doom,” and “The Karate Kid”) is a prime candidate for lightheaded, rose-colored reflection, I’m partial to the hot flash of 1989, where I personally blossomed as a moviegoer. It’s been 20 innocence-shattering years since that monumental summer, but I can still warmly recall the newfound freedom of mobility achieved with a bicycle and subsequent psychological bomb dropped on me when the realization hit that I could venture anywhere on it. Some peddled straight to trouble, I went to the movies. It was also a time of friendships solidified, taboo R-rated masterworks imprinted on a soft teenage mind, and the giddy prospect of watching several beloved childhood franchises return to the screen after extended absences. It was an insanely blockbuster-heavy schedule manufactured to keep the public glued to the screen through admittedly despicable, but quite effective familiarity. It was also the nuclear-buzzed summer of “Batman.” ‘Nuff said.

I look back on 1989, and I’m all smiles. Of course, the reality is far more…real. Sure, the highlights included “Do the Right Thing,” “Dead Poets Society,” the aforementioned O.G. Dark Knight flick, and a third Indiana Jones movie. But there was also the achingly dull 8th installment of the “Friday the 13th” saga, “Weekend at Bernie’s,” and Sylvester Stallone’s yes-he-really-made-this “Lock Up.” Yikes. Memory can be a real cold-hearted bastard sometimes. Of course, this leaves me with only one option: to relive the summer of 1989 all over again. Week by week, viewing a majority of the same movies I attended 20 years ago in a vain effort to suck down the few remaining fumes of my childhood, and to pop the hood of this golden-age season to better understand its working parts.

So grab the buttery popcorn, the nearest non-diet soda (this was before calories after all), and make sure the slightly rusted hand-me-down 10-speed bike is firmly locked to the nearest handicap parking sign. We’re going to the movies.

Actually, before I dive into the deep end of the cinematic pool here on Memorial Day, let me bring up a motion picture that opened a week earlier, yet has managed to develop into an esteemed cult phenomenon and philosophical event when, back in the day, it was only a trivial action flick blip on the radar. Yes, I’m talking about “Road House.”

Now it’s an omnipresent, overtly cutesy pop culture punchline, but 20 years ago “Road House” was a superlative goofball classic that was absolute catnip to my 13-year-old mind. I was way too young to see it, but that never stopped me before. The explosion of redneck defiance, Sam Elliot’s spot-on impression of KY jelly, freewheeling sexuality, scorching Jeff Healey Band blues, and Patrick Swayze’s Zen-like barroom-busting badassery probed deep into my virginal soul. It was mesmerizing: a bloodied, battered Penthouse Letter brought to life and ready to yank out your voice box. I had never witnessed a picture like it before. Plus, being on the cusp of a pubescent heterosexual wonderland, this sorta stuff didn’t go unappreciated:

Nowadays, “Road House” registers as downright quaint; a fitting reminder of a time when Patrick Swayze rode unicorns with the gods while the chilled northeastern wind whipped passionately through his heroic mullet. He shall always be Dalton to me. That or Bodhi.

Indiana Jones and the Last Crusade

Nutshell: Indiana Jones (Harrison Ford) and his father Henry (Sean Connery) team up to battle the Nazis as both sides race to capture the Holy Grail.

Two decades ago the summer movie season began on Memorial Day weekend. These days, it’s around mid-February. There was no brighter way to kick off the big guns of 1989 than a fresh Indiana Jones adventure, coming a full five years after “Temple of Doom” scared the crap out of everybody, including the filmmakers. “Last Crusade” was the inevitable apology picture, with perceptible restraint in the barreling action department and an overall emphasis on slapstick comedy.

1989: “Last Crusade” was met with a quivering sense of anticipation from the entire moviegoing nation, and I wasn’t immune from the excitement. It was Indiana Jones for goodness sake, and a chance to partake in one of his big screen adventures with a plan of obscene matinee repetition was an irresistible proposition at the time. This sun-kissed, family-bonding thrill ride provided the essential spills and chills to set the candied tone for the upcoming months. To a kid who wasn’t allowed to see “Temple of Doom” theatrically, “Last Crusade” was sweet freedom, even if I didn’t understand all the sex jokes at the time.

Interestingly enough, “Last Crusade” unofficially launched a newfound saturation level for blockbuster exhibition. Riding the unavoidable wave of multiplex construction (including a newly minted 8-plex built near me), “Last Crusade” was the first film in my memory to forcefully gobble up screens upon release, lighting an inferno under the already blazing box office charts by removing such inconveniences as a sold-out show time. Now Indiana Jones could be experienced every hour on the hour, a crucial first step toward the exhibition abuse we all know and grudgingly accept today. While certainly not as monumental a cultural development as the game-changer sliced bread, the ticketing upgrade was thrilling at the time, adding to the do-or-die moneymaking performance mystery of the upcoming months.

2009: Over the intervening decades, “Last Crusade” has held up remarkably well, even if I place it low on the gun-to-head, gotta-choose-one scale of Indiana Jones installments. On the plus side, there’s the diamond interaction between Ford and Connery, a stupendous match-up of wit and machismo that keeps the engine of the film humming when the plot wanders off. There’s also Steven Spielberg scraping the gunk off his boyhood glee, after spending years trying to sell himself as a serious filmmaker to impress his colleagues. “Last Crusade” is pure kicks, and I would never fault this spunky blast of quips and near-misses for trying to vanilla its way back into the hearts of millions. However, it’s easy to sense Spielberg’s restraint and remorseful tone, hoping to win back favor with an event film that’s easy on the senses after “Temple of Doom” basically pissed on the Christmas presents.

And if you ever meet me in person, feel free to request my single-line Henry Jones, Sr. impression. You will not be disappointed. 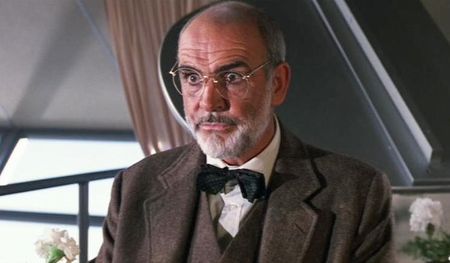 Nutshell: Skip-tracer Tommy Nowak (Clint Eastwood) teams up with bail-jumper Lou Ann (Bernadette Peters) to thwart a gang of white supremacists and their master plan to better the master race with counterfeit money.

2009: Marketed as lighthearted action drivel, “Pink Cadillac” is actually a far crustier picture than remembered. In a distinctly askew way, the movie fits in comfortably with Eastwood’s eclectic career, balancing small-town action and relaxed character development with minimal fuss. Still, the film isn’t nearly silly enough, even with Eastwood noticeably loosening his belt and flexing his comedy muscles after a long screen drought. He’s better with the brawling, and while the script stumbles beyond a comforting sense of reality (white supremacists?), “Pink Cadillac” maintains a certain hospitable, emphatically dim-witted appeal. It’s lesser Eastwood for sure, but not as disagreeable as remembered. Peters adds the ideal amount of her well-groomed squeak to the picture as well.

And Kiefer Sutherland and Lou Diamond Phillips make a buddy comedy nobody remembers.

I love this. What a great time to be a kid!

Can't wait to read more. I look back at the Summer of '89 as my all-time favorite "movie summer" too. It was a very special time for me with alot of great memories I will carry forever.