“The Girlfriend Experience” is a palate cleanser for director Steven Soderbergh, who embarks on one of these odd “personal” films every few years (“Bubble,” “Full Frontal”) when his fingers tire of counting “Ocean’s” trilogy money. A mood piece on vagaries of whorish behavior, Soderbergh is stuck in full wander mode with this picture, absent the sort of thespian effort that would enliven the cross-eyed atmosphere of disconnect Soderbergh is forever chasing.

A personal trainer looking to go into business for himself, Chris (Chris Santos) is having difficulty communicating with his girlfriend, Chelsea (Sasha Grey). A high-end call girl working a colorful list of shy and cultured clients, Chelsea is torn between the pseudo normalcy of her life and relationship with Chris, and her need for personal adventure and expression, often guided by a curiosity with personality sciences.

To explain more of the “Girlfriend Experience” plot would a) suggest there’s actually more of a plot, and b) force me to run the risk of making the picture sound marginally more exciting than it truly is. With a small budget and the comfort of his highly trained filmmaking reflexes, “Girlfriend” is a cruise control effort from Soderbergh, who steps away from the grind of studio work to take an observational post on the fringes of the sex business. Granted, there’s no actual sex in the picture (and a minimal amount of nudity), but the filmmaker enjoys staging the leering, ill at ease interaction of the prostitution industry, albeit classed up here in Chelsea’s dream world of high fashion, glossy makeup, and champagne wishes.

Instead of the hot-blooded stuff, “Girlfriend” is 100% mope and pout, intended more as a meditative piece for movie scholars than a giving film experience that would require something Soderbergh has always shown disdain for: emotional investment. “Girlfriend” is like a Bret Easton Ellis novel come to life (though that already happens with regularity), focusing on vapid characters with vaguely defined concerns. The film is all surface and purposefully so, with outstanding cinematography (from Soderbergh) showing off the last stand of personal wealth and cash freedom in New York City during the waning days of George W. Bush.

The 2008 Presidential race and ensuing financial fallout fills in the background noise in “Girlfriend,” often for reasons not immediatley made clear, and occasionally the chatter blurs what little of a reliable timeline Soderbergh permits the drama. It’s a context of doubt and communal indecision that mirrors Chelsea’s own path of concern, and while it adds a topical zest to the flow of the film, the monetary pressures never reach a boiling point that demand exploration. It comes across as a financial crisis gimmick, and a strange one at that.

But let’s get real here, few are going to seek out “Girlfriend Experience” to watch Soderbergh flex his Euro-cinema muscles -- they’ve come to intently study Grey. A hotly fetishized adult film star, Grey is embryonic in appearance, MAC-ready pretty, and woefully inexperienced with subtle communications of gut-rot drama. While Grey is supposed to be playing a vain shell of a women, her flat line readings and robotic body movement break the lurid spell early on, making scenes of her discontent useless and moments of domestic combat with Santos unbearable. To bust Grey for her porn heritage is an easy layup of criticism (with credits such as “Barely Legal 62” and “Strap Attack 6,” it’s hard to take her seriously), but watching her unnatural, zombified performance isn’t easy, raising interesting questions about the exact nature of her casting. For looks? Street cred? Permissive behavior? The “Boogie Nights” days of struggling actors turning to adult film is long over, leaving Grey’s teeth-grindingly amateurish performance an unnecessary evil.

Take Grey out of the equation, and “Girlfriend Experience” studies some interesting behavioral patterns with Chelsea’s eccentric clientele. A clever swipe at prostitution review websites adds another layer of appealing satire, spearheaded by film writer Glenn Kenny’s oddball cameo as a manipulative critic who coerces Chelsea into a free ride (a subplot registering even more bitterly if taken as a metaphor for Soderbergh’s own Oscar-season flirtations). At 74 minutes, “Girlfriend Experience” barely has the time to infiltrate the senses, even when Soderbergh pushes Chelsea as a teary sympathetic figure near the conclusion. I suppose a film like this is the price to keep Soderbergh in the directing game, and while he can make a little over an hour of screen time feel as long as two presidential terms, it’s reassuring to watch the man willingly work through his artistic itches without completely trashing his career. 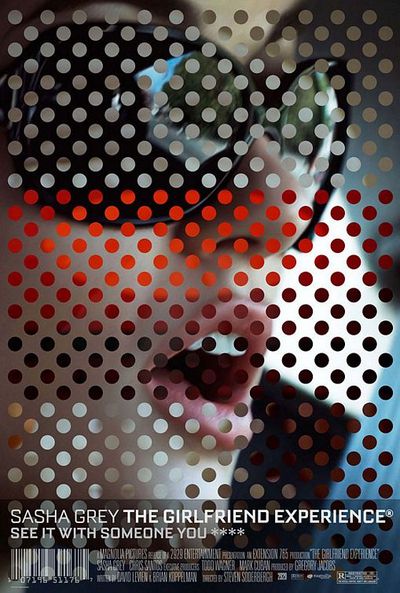 I'm looking forward to seeing this...For those of us who live The Real Girlfriend Experience, I suspect this to be an inspiration...