A frothy brew of “The Sting,” “Bottle Rocket,” and Dr. Seuss, Rian Johnson’s “The Brothers Bloom” has its cheating heart in the right place. A twisty cinematic con game keen to stay one swindling step ahead of the audience, “Bloom” can be a dense, complicated puzzle of faces and places, with Johnson toiling away to preserve a fresh perspective on a horde of highly rusted screen clichés. However, his lube of choice is whimsy, and as the filmmaker pours an endless stream of cutesy behaviors and larger-than-life screenwriting into the stew, “Brothers Bloom” eventually curdles altogether, leaving an overcooked shell game aggressively trying to pass itself off as delightfully quirky fixins for the horn-rimmed, organic-brew crowd.

Ever since they were kids, brothers Stephen (Mark Ruffalo) and Bloom (Adrien Brody) have employed the art of the swindle to help keep them inseparable and protected from the outside world. Conning clueless marks with elaborate life and death narratives, Bloom is starting to feel the corrosive effects of practiced deception, wanting out of the life, but unable to refuse the demands of his older brother. Hoping for one last con, Stephen, Bloom, and partner Bang-Bang (Rinko Kikuchi) set their sights on Penelope Stamp (Rachel Weisz), a seemingly blissfully unaware heiress who’s easily drawn to personal drama. Globetrotting by land, air, and sea to help convince Penelope to open up and trust them for the ultimate hustle, Bloom is quickly crippled by doubt when he develops feelings for the mark, possibly jeopardizing the whole con in the process.

A few years back, Johnson wrote and directed the awkward “teen noir” oddity, “Brick.” It was not something I easily appreciated at the time, feeling distracted by the clunky way it stirred; a manner that screamed “look at me!” over the smoothly organic voice of a natural born filmmaker. “Brothers Bloom” sinks even further into Johnson’s muddy imagination, with the new picture handed a significant budget and A-list talent to help realize a crushingly conventional world of cheats and crushes. “Bloom” is infinitely more approachable than convoluted “Brick,” but there’s a roadblock to Johnson’s creased vision that prevents the hepcat colors of the written word from bursting alive onscreen.

Building a specific grifter cadence for its characters, “Brothers Bloom” employs splendid finger-snap timing, with contorted slang and innuendo-laden dialogue delivered by a group of actors enjoying the ride; the motion picture gig equivalent of driving a convertible with the top down. It’s an intricate verbal assembly, with Johnson looking to invoke the swindle flicks of yore that savored the ballet of criminal conversation over the much more familiar trappings of bullets and bloodshed. It’s easy to appreciate the purity of spirit that envelopes much of “Brothers Bloom.” Ultimately digesting it all is where my objections start to rise.

I hate to pull a familiar red card, but it seems Rian Johnson adores the work of Wes Anderson so much, he’s decided to co-opt his famous trimmings. From the childlike, hand-drawn stations of the con map that helps to guide the siblings through their scheme to the exaggerated costume and set design that sugars reality to such an irritating degree it might require a root canal after viewing, “Brothers Bloom” is swaddled with a type of precious embroidery that’s made Anderson an indie sensation, but makes this film difficult to endure at times. I wouldn’t brand Anderson an industry original, but Johnson is playing loudly in the same sandbox (e.g. Penelope’s deafening idiosyncrasy has her hobby to collect hobbies branded with a Dignan-like deadpan flair) and it doesn’t come across nearly as inviting or profoundly considered. “Brothers Bloom” loves its artifice, yet never establishes a conflict strong enough to justify the laborious effort it takes to peel away the waxy layers and find the humanity inside.

Watching Brody suffer as Bloom provides some juicy elements of worry to soften the dizzying architecture of the larger con game, which eventually meets up with an eye-patch-wearing devil named Diamond Dog (Maximilian Schell), reveals Penelope to be a far better assistant to the bothers than a dim-witted mark for the fleecing, and urges the siblings into new goals when misfortune and explosive accidents begin to add up. Observing Johnson frantically stitch all the left turns and quirks together can be impressive in small doses, and he keeps the fraud in solid condition to the very end. However, there’s something like the character of Bang-Bang always standing in the way, jamming the natural fluidity of the piece over and over. A Silent Bob character clad in Milan fashion, as quick with a wink as she is with a pack of explosives, Bang-Bang is emblematic of the cartoon Johnson is aiming for and never quite achieves. Kikuchi is awfully fetching in the role, but it’s a gimmick drowning in a sea of gimmicks and the feature never conquers its habitual need to remind the audience of its own cleverness.

I walked out of “Brothers Bloom” feeling disconnected to everything that occurred onscreen, with the only possible exception being Weisz and her finely tuned ability to make anything written for her instantly sing. “Brothers Bloom” is about the craftsmanship of deception, the perpetual mumbly-peg game of brotherhood, and the pure desires of the longing heart at odds with the distrustful brain. It’s all zipped up tightly in Johnson’s insistently embellished world; a buffet of clotted whimsy that waits patiently for approval it rarely earns. 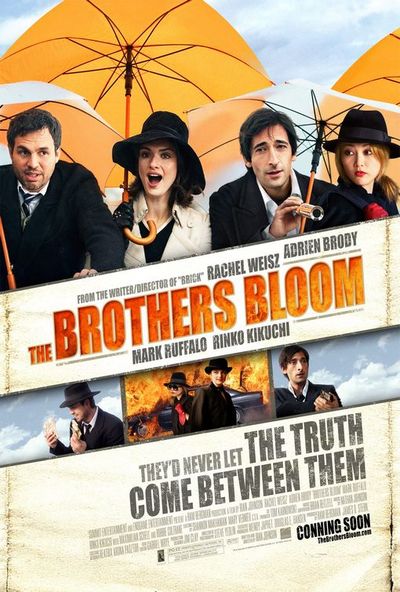 Excellent review. I saw this movie yesterday and couldn't agree more; I didn't know, going into it (considering a cast that boasted two Oscar winners and Robbie Coltrane), that I had settled in for a pseudo-intellectual hipster wankfest. But the second they introduced Weisz's character, the quirky, fast-talking cute girl who happens to be bored, rich, and epileptic, I knew it was over. This film is the result of someone idolizing Wes Anderson but not understanding what makes his films tick, and so decides to flood his film with the most obvious hallmarks of Anderson's style to try to pull a fast one on the audience. Yet another case of confusing the symptoms for the cause.