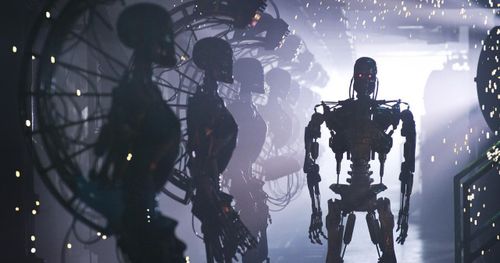 2003’s “Terminator 3: Rise of the Machines” was a frivolous entry in this brutal saga of man vs. machine, but it retained a suitably metallic scent of James Cameron’s original creation, and offered audiences a sucker punch of a doomsday ending, placing a respectable capper on a franchise that never bothered to plan too far ahead. We’re now confronted with “Terminator Salvation” because Hollywood is stuck in the “rebooting” phase of its history, scouring the vaults for once high-profile material it can reshape and resell to a public hungry for familiarity. Not unexpectedly, the Cameron-less “Salvation” is another trembling step backwards for this once persuasive series of time-traveling adventures, crafted by a filmmaker I was hoping could lead the charge and take the franchise in a whole new direction.

The year is 2018, and John Connor (Christian Bale) is an exhausted soldier in the war against Skynet and their army of killing machines. Using tapes from his dead mother (Linda Hamilton, in a vocal cameo) as his guide, Connor attempts to piece together his future, which is tied directly to his past. The clue in play here is Kyle Reese (Anton Yelchin), John’s father, who’s now a feisty teenager looking to assist the Resistance movement stationed clandestinely across the globe. Freed from captivity is Marcus (Sam Worthington), a ruthless killer from 2003 who has now regained consciousness, unaware that machines have corrupted his body through devious experimentation. Finding his way across the wasteland to Los Angeles, Marcus befriends Kyle, who takes him to the core of the Resistance, finally meeting with John Connor when Kyle is taken by the enemy, marked for termination, thus threatening any hope for the future.

As expected, “Terminator Salvation” is not a simple to film to summarize. By now, the mind-bending John Connor legacy has been pulled apart like taffy left out in the sun, messily reconfigured to meet the standards of the various directors who have suited up for the sci-fi cause. The latest mind to tackle “Terminator” is McG. An unlikely choice, I know, yet McG has made quite an impression over the years with his cherry bomb “Charlie’s Angels” pictures and his detour into Oscar bait with the football drama “We Are Marshall.” We’re not talking a razor-sharp cinematic mind here, but McG has an intricate vision for action set pieces, making him comfy with the demands of the tangled “Terminator” world. However, to put it bluntly: McG botches the whole venture. Where exactly does this picture go wrong? Well, the shining moments of “Salvation” are the sequences that reference the past “Terminator” features. That’s not how a reboot should score heart-stopping highlights. 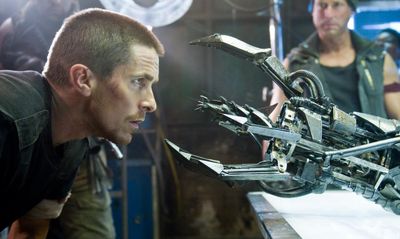 With his monochromatic, gritty cinematography, McG is gunning to manufacture a forbidding futureworld environment for “Salvation” that reworks previously established visions of Connor’s combat years. What Cameron imagined as a cold, murky war of the night is now a sun-dried barren wasteland of grimy survivors and numerous Terminators stationed out in the unknown to hunt them down. The screenplay by John D. Brancato and Michael Ferris is an unsurprisingly dim-witted affair (the men previously teamed on “Catwoman”), downplaying the time-twisting mania of prior films to baste in the post-apocalyptic gloom. The change in atmosphere isn’t appealing and the screenwriting does nothing to inspire, gifting the cast miserable exchanges of Sci-Fi Original dialogue and narrow characterization that intensifies McG’s cluelessness with the property. While I trust the director was eagerly committed to the story, there are sections of “Salvation” that reek of a man who mentally wandered off, trusting a steady diet of fireballs and city-block-sized explosions would cover any his blunders.

Promoted as the rise of John Connor from grunt to rebel leader, “Salvation” is actually more consumed with the story of Marcus, a machine/man hybrid who’s here to supply the brawn and a dollop of crude thematic substance the rest of the picture can’t be bothered with. It’s a complicated role that McG is most intent on exploring, leaving Connor and Bale’s one-note performance of raspy howling absent the gravity to believably plug into established myth, making Bale’s appearance seem more like a stunt-casting cameo. “Salvation” is left to Worthington, and his combination of bland charisma and wobbly accent control renders the character a complete blank; a hero not worth the emotional investment, reduced to screams and grunts to lure a reaction out of the viewer. Marcus is intended to represent the next stage of Terminator violation, yet McG never sells the combustibility of the conflicted man and his psychological processing of dual purpose. It’s a curiously ineffective character, and he’s the linchpin for the whole story. 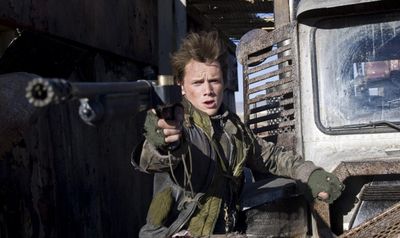 While I wasn’t thrilled with Worthington’s monotonous reading of Marcus, it’s impossible to lay all the blame on the actor. “Salvation” was clearly trimmed heavily before release, as sloppy stitchwork is perceptible throughout the entire film, felt most directly in the soldier character of Blair (played tepidly by Moon Bloodgood), who nonsensically torches her steadfast allegiances to the Resistance to protect Marcus from justifiable execution after one single day spent together. It’s a subplot that was clearly neutered before release, and it creates a frustrating black hole of logic and motivational buffoonery the rest of the film can’t avoid being sucked into.

I don’t doubt McG’s enthusiasm for the “Terminator” universe. The highlights of this disappointing picture tend to ape previous achievements, be it a recognizable line or two, a specific Guns N’ Roses anthem blasting away from a boombox, or a showdown between Connor and a freshly produced T-800. This lethargy extends to Danny Elfman’s score, which only jolts awake when reminding the audience how terrific Brad Fiedel’s original percussive compositions were. McG loves to pepper in the references and tributes, but he’s aware of invention, focused primarily on the machine army, which moves from Cameron’s handful of killer robots and wobbly airships to a plethora of sleek tanks, glossy motorcycles, and CG-rich metal grunts all poised to slaughter our heroes. Obviously more time was spent on designing “Salvation” than editing “Salvation.”

The “Terminator” world is a place where up is down and left is right. While “Salvation” makes a game attempt to rile up the screwball continuity of this franchise to introduce a new wellspring of adventure for John Connor, the choices made by McG and his crew smother the nuances James Cameron worked diligently to generate. Instead, “Terminator Salvation” is a cold, blunt summer movie misfire, infatuated with mindless explosions like an infant with fecal matter. The last picture featured Arnold Schwarzenegger exclaiming “Talk to the hand!” for goodness sake. Clearly there was room for improvement. Still, I’d take a brief franchise humiliation over this lumbering, joyless detour into unappetizing Hollywood recycling. 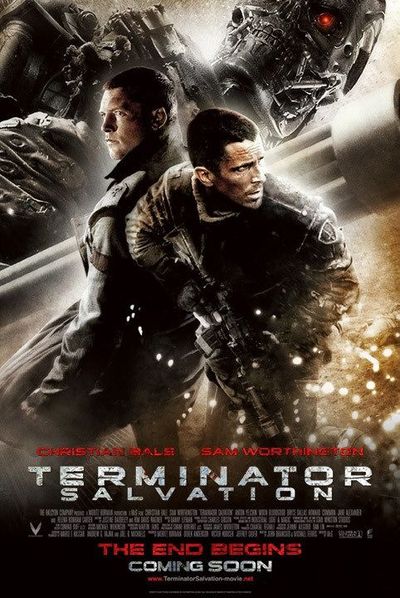 Terminator Salvation might have made Christian Bale a lot more money, but it definitely did not help to establish his reputation as a dependably good actor