An artistic blood transfusion of immaculate execution, the new “Star Trek” boldly goes straight to the senses, providing a full-throated rush of operatic sci-fi, cleverly conceived characterizations, and a swarm of franchise homages and surprises that take incredible care of the brand name’s impossible 44-year-long pop culture reign, while forging firm new ground for those who couldn’t tell Kirk from Spock with a gun to their head. Director J.J. Abrams has achieved what many thought to be impossible, reaching bare-handed into the venomous depths of absurdly rigid canon, pulling together a sublime space adventure that flies as confidently and triumphantly as “Trek” ever has before. It’s not only a victorious series highlight, but perhaps one of the best pictures of the year.

Turned rebellious after the heroic death of his father aboard the U.S.S. Kelvin, James Kirk (Chris Pine) has lost himself in booze and indifference. Sensing great leadership qualities in Kirk, Captain Pike (Bruce Greenwood) encourages the young man to join Starfleet and live up to his potential. Taking the dare, Kirk journeys to the academy, where his brash behavior upsets his teachers, but endears him to medical officer Leonard “Bones” McCoy (Karl Urban). Also at the academy is Spock (Zachary Quinto, “Heroes”), an embittered science officer dealing with those who distrust his human/Vulcan heritage, finding Kirk’s illogical behavior maddening. When a rogue Romulan named Captain Nero (Eric Bana) appears inside a massive mining ship, armed with a black-hole-creating doomsday device targeting peaceful planets, a crew for the newly christened U.S.S. Enterprise is hastily assembled for protection. With Nero’s sheer power and path of revenge fueling his rage, Kirk is forced to assume a leadership role against Spock to find a way to defeat their enemy, finding pertinent advice emerging from an unexpected visitor from the future.

Take into consideration that the sprawling “Star Trek” universe has been flattened and repurposed over and over again for decades now, spawned off into oblivion and merchandised within an inch of its life. That Abrams and screenwriters Roberto Orci and Alex Kurtzman could waltz in and resuscitate the whole concept is a miracle, but that’s what this rejuvenation of “Star Trek” feels like: a series of wonderfully imagined storytelling miracles that reclaims the battered reputation of “Trek” and forms it into something innovative, even while buttressed by established iconography.

Undertaking a spine-tingling Lucas/Spielberg route to remodeling the universe, Abrams refocuses “Trek” energies to pure snorts of suspense and action, crafting a thrill ride ambiance to compete with the marketplace and to appeal to those unfamiliar with traditional Enterprise shenanigans. “Star Trek” cuts to the chase from frame one, galloping through origin stories that set up proper motivations (Kirk is a troubled rebel, Spock is a momma’s boy with a chip on his shoulder), while embarking on a powerful visual odyssey that finds dazzling new fluidity to the majestic Starfleet ships and a glorious cinematographic fixation on lens flaring for an intriguing optical motif. The picture is a visual barnstormer, dreaming up a rousing galaxy quest for the heroes and villains that hold faithful to the ornamentation of the franchise (no worries, the Enterprise is still the Enterprise), but reconsiders everything else, hoping to entice those standing outside the “Trek” treehouse with a gorgeous platter of warfare, exotic alien worlds, and crystalline Starfleet hardware.

“Star Trek” is a technical tour de force from any angle, showcasing seamless special effects that range from subtle usage of series knickknacks to planet-swallowing nightmares as Nero emasculates his enemies by cruelly robbing them of their homeland. Abrams has a special gift for staging gymnastic feats of action (his “Mission: Impossible III” was the most agile of the series) and backed by a formidable budget, “Trek” is allowed free reign to parade colossal waves of photon-frisky combat and intergalactic suspense that are miles ahead of anything the franchise has been permitted to indulge before. “Star Trek” is an action-adventure film at its core, yet Abrams is careful to preserve the scientific heart of the camaraderie, with ample time allotted for Kirk and Spock to engage in a battle of intellect and the finer points of logic, founding the relationship in a charming glue of muted aggravation and burgeoning respect.

While an unsavory proposition for any actor, the ensemble does a marvelous job stepping into the iconic boots and tight polyester shirts of the original cast. It’s all one big loving tribute, but the performers survive constricting issues of comparison through the screenplay’s effort to find fresh psychological threads to pull at. While Kirk remains a panty-removing, button-pushing rascal, Chris Pine unearths more fertile dramatic ground portraying the character’s erratically instinctive gifts of leadership; Zachary Quinto develops Spock beautifully as a man torn between species, finding his cumbersome Vulcan logic contradicting his hot-blooded human desires; and Karl Urban positively owns the film as the frazzled Bones, who loathes space travel, yet can’t seem to avoid his heroic calling to Starfleet. Urban channels DeForest Kelley in a growling manner (“I’m a doctor, dammit!”) I never thought possible before. His moments hoping to talk Kirk down from assured doom are priceless.

The rest of the cast is as equally victorious, as Abrams puts forth an effort to “introduce” the likes of Sulu (John Cho), Scotty (a lively Simon Pegg), Uhura (Zoe Saldana, finding newfound dimension to the role), Chekov (an atypically digestible Anton Yelchin), and Captain Pike with little slices of good guy posturing, uniting the crew early on as a creative force to be reckoned with. While the thought of new faces assuming control of beloved old characters might compel the average Trekker to run asthmatically for the hills, the switch is handled efficiently by Abrams, who establishes every Enterprise team member with a thunderous reverence that helps to swallow this often witty reboot.

The “Star Trek” highlights and glorious oddities are almost too numerous to mention: bosomy green alien girls for Kirk to devour, fierce phaser fights, gigantic snow planet monsters, shuttlecraft births, the use of a Beastie Boys cut on the soundtrack (!), supporting turns from Tyler Perry and Winona Ryder (as Spock’s concerned human mother), daredevil transporter action, tributes to “Wrath of Khan” and Abrams’s own creative world, a needed ass-covering foray into alternate realities, deliriously satisfying sonic boom warp jumps, a bravura score from the gifted composer Michael Giacchino, sexual fireworks between Spock and Uhura, and a chance to experience the famed Kobayashi Maru test of Starfleet character. Wow. “Star Trek” strikes a reassuring balance between worship and modernization, a masterful one at times, offering fans enough familiarity to soothe while plunging ahead as an (hopefully) up and coming franchise for years to come.

“Star Trek” is a stupendous revitalization of a concept bled dry long ago. It offers nothing but pleasures to those in tune with Gene Roddenberry’s original creation, and provides ample comfort to newcomers who should immediately set aside anticipated Trekkie bias and suit up with Starfleet for the true roller coaster ride of the still-virginal summer. 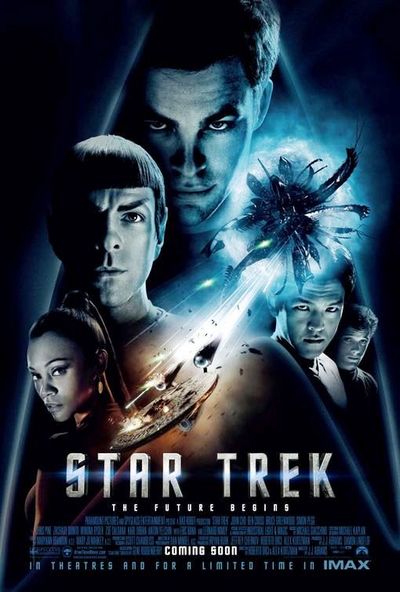