2001’s “Donnie Darko” was a bona fide movie-making miracle. An exceptional motion picture that smoothly communicated surreal imagery and brain-melting concepts of time travel, black holes, and personal demons, the apocalyptic “Donnie” suffered through an ill-timed release date (ushered into a handful of theaters soon after 9/11) and dreadful marketing (or the lack thereof), left to die like so many similar low-budget mindbenders. With the release of the DVD, “Donnie” became a titan, allowing the disaffected and the curious a chance to sit down and intimately dissect writer/director Richard Kelly’s labyrinthine cult smash. “Donnie” was graceful, invitingly mysterious, and assured all around. The last thing it needed was a cheap DTV sequel to tarnish its legacy.

Escaping the mournful disregard of her parents in Virginia, Samantha Darko (Daveigh Chase, “The Ring”) takes off on a cross-country road trip to Los Angeles with friend Corey (Briana Evigan, “Step Up 2”) to fulfill her dream of professional dancing. When car troubles arise, the duo pull into Conejo Springs, a small town populated by a community of zealots (including Elizabeth Berkley, Matthew Davis, and John Hawkes) and young outsiders (Ed Westwick and Jackson Rathbone). Forced to mingle with the locals, Corey immediatley takes to the boozy pastimes of the town, while Samantha, still reeling over the peculiar death of her brother Donnie seven years earlier, finds herself drawn to the plight of Iraq Jack (James Lafferty), a disturbed Gulf War I vet who has learned through nightmarish visions that the world will end on July 4th, 1995.

There’s a fiery built-in animosity toward “S. Darko” that makes perfect sense to me. There are a million needless sequels out there acting as DVD tombstones in the video store graveyards, but the complex “Donnie Darko” is hardly an ideal candidate to build a franchise upon. Surely it’s no surprise to read that “S. Darko” is an egregiously rancid film on its own, and a complete travesty as an improbable second chapter of the “Darko” saga. It’s a spineless, careless, bizarrely unadventurous number two that would rather saddle up and rehash Kelly’s original screenplay over any clear-cut attempt to cook up some juicy oddities of its own. In essence, it’s “Donnie Darko” all over again, only instead of Jake Gyllenhaal’s pleasing performance of doe-eyed psychosis we’re stuck with Chase, who barely remains awake during her line readings.

Trudy: I have a personal relationship with Jesus Christ.
Samantha: Really? What’s he like?
Trudy: He’s big and strong. Tan. Lots of muscles. He’s got lightning bolts shooting out of his eyes.
Samantha: No, really…
Trudy: It’s true. He’s awesome.

Director Chris Fisher and screenwriter Nathan Atkins (who deserves nothing less than a spanking for his facepalm-inducing dialogue) are obviously under orders to reheat “Darko” iconography for another round of tangent universe tomfoolery as Corey and Samantha play a lukewarm game of dead/not dead with fate. With the reappearance of Frank the Bunny (a metallic mask employed here as Iraq Jack’s method of self-flagellation), more usage of the glowing tentacles that guide dreamers to their destiny, maneuvers with multiple Living Receiver perspectives, and a ticking clock in the form of an approaching Independence Day meteor shower, “S. Darko” is going to look and sound awfully familiar to die-hard fans who’ve studied “Donnie” with grad school precision. Fisher isn’t here to rock the boat with fresh ideas, making the sequel frustratingly timid with its unmotivated weirdness, believing familiarity will be the Wonka golden ticket to assured mass acceptance, not dramatic innovation.

While Chase acts as the only bridge between the two pictures (good to see Samantha still harbors feisty Sparkle Motion dreams), the character is given little impetus for her hallucinations, which only emerge because of her tainted Darko blood. She’s merely a conduit for Fisher to stage his take on unrelenting “Darko” bleakness and formidable angst, crusted with a few ‘90’s pop tunes and a young cast who act dumbfounded when requested to deliver any facial gesture than isn’t a pout (Westwick is especially vacant as the smoldering, cigarette-pack-rolled-up-in-sleeve small town Romeo). There’s no scintillating drive of otherworldly measure pinning Samantha down in the feature, she’s just a drab, disconnected pawn in a cluttered screenplay that’s eager to introduce puzzling subplots and metaphysical edges, but refuses to pay anything off, just to keep up with the first film’s elusiveness.

The difference between this feature’s ambiguity and Kelly’s back pocket mysteries is simple to explain: Kelly is talented. He invented his extravagant world of destiny and domestic concern and knew innately how to organize and a shoot it. “S. Darko” is born from cash-hungry producers who perhaps never exactly understood what Kelly was doing, but they own the rights to the “Darko” world, hoping to coldly profit from an underdog cinematic event that could never be replicated. 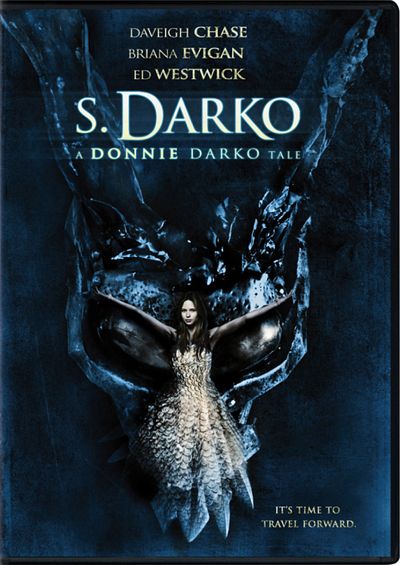 Dead on review. It's really a shame that this film is tied in any way to its far superior predecessor.

If Joaquin Phoenix was doing movies in his current catatonic/David Letterman state, then Ed Westwick would be out of a job.

This movie was horrible with a capital H. It tried to be deep and abstract by using a soundtrack of melancholy angst against a bunch of strange images and dialogue. In reality, it's a lazy wannabe that offers nothing of substance.

When you rob the CW for what could be the most compelling roles, you're in trouble.

This film was very disappointing.
I sat there wanting more, and was rewarded with emptiness and 5 dollars less in my pocket.

A D- was GENEROUS being a lover of Donnie Darko i went out blindly hoping and praying that maybe the sequel would be at least *ok*. This pile of flaming crap wasn't worth the $1.75 rental i paid for it at blockbuster. There was at least 4-6 different mini plotlines that were muddled and tried *way, way* too hard and full of holes. The soundtrack to the original was eerie dark lush addictive. The music in the sequel often didn't match at all what was going on (mood wise for scene) in the movie. Horrible and shameful! Get some actors who understand how to portray a role, find a *far* better writer, get somebody who understands how to score a movie and *TRY* again. Seriously beyond disappointing.

It's hard to imagine this review being any more accurate than it is, apart from probably the grade. This movie was designed to strip cash from fans of Donnie Darko while using the lead actors as magnets in a blind attempt to attract mindless masses of teens. I had no doubts that the sequel would probably be bad, but this atrocity will provoke any intelligent viewer who's seen "the original" into ripping the eyeballs out of his head with a screwdriver in an attempt to preserve the excellence of Kelly's clever and well-executed movie. It's too bad you can't "return" a movie out of your head and get your money back once you've watched it, because that way I would have had less of a headache, and more money in my pocket. Also, Fisher might have now had a non-negative dignity. Clearly he's not sober enough to comprehend just how meaningless he made this movie be and how unworthy a director he is to "continue the franchise".

I ditto all of the above posted comments save the last one. Everything about this movie is plain cheap.