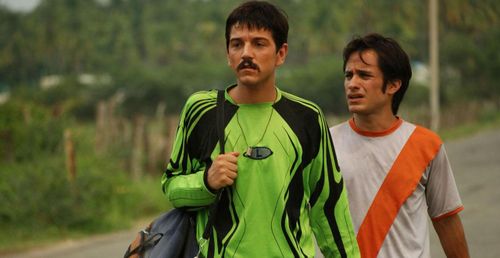 I don’t know whether to laugh or cry over “Rudo y Cursi,” an oddball football dramedy that reteams actors Gael Garcia Bernal and Diego Luna eight years after their breakthrough roles in the indie sensation, “Y tu mama tambien.” “Rudo” isn’t a strikingly original creation, but the efforts of the cast make the stale script sing, assembling a motion picture that coasts along nicely on pure performance oomph. Granted, all this uncut Mexican energy will perhaps take a night in a sensory deprivation chamber to properly expunge from the system, but it’s a wild ride of thespian effort that keeps the material amicable.

Brothers Tato (Gael Garcia Bernal) and Beto (Diego Luna) are Mexican banana farm employees struggling to make ends meet while they watch their dreams evaporate. On their way to a neighborhood football match, the boys are stopped by agent Batuta (Guillermo Francella), who’s vaguely interested in their skills. Offering a slot to only one man, Beto is burned when his scheme to make the cut is thwarted by Tato. Whisked away to Mexico City to play professional ball, Tato is rechristened Cursi, becoming a sporting superstar with money to burn. When Beto (now Rudo) finally receives a chance to prove his worth as a goalie, the brothers are forced to compete for fame, only to have their worst instincts bury them in betrayals and mounting debt.

There’s a freewheeling rhythm to “Rudo” established early on by writer/director Carlos Cuaron (brother of Alfonso Cuaron and co-writer of “Y tu mama tambien”) that takes on a semi-improvisational atmosphere, focusing on the bickering relationship between the two brothers as they blindly sprint for their dreams. Cuaron maintains a curious distance from the performers, allowing them a wide space to react and celebrate in a permissive manner that encourages rapid-fire dialogue delivery and full-body reaction. After all, this is a tale of two men scraping together a chance at success handed to them purely through chance, and Cuaron is wise to stand back and allow the actors to articulate the onslaught of miracles and misery through instinctual performances.

Because “Rudo” is such a loose-fitting, permissive viewing experience, Cuaron struggles to juggle several combative tones to simulate the whirlwind event that Tato and Beto have found themselves in. For the most part, “Rudo” is a comedy, observing Tato chasing his more ideal goal of becoming a singer (using his football fame to release a Tejano version of “I Want You To Want Me”) and finding romance with a gold-digging top model, while Beto uses his newfound cash to purchase monkeys and other bizarre displays of position. “Rudo” is a standard Faustian tale of men finding even greater difficulty once comfortable in the lap of luxury, but Cuaron roots the narrative traditions in tempestuous Mexican social commentary, where status elevation is a hot commodity with limited admission, even turning drug lords into cuddly saviors out of desperation to celebrate monetary achievement of any sort. It’s this thinking that ultimately undoes the characters, making a salient point on the current state of cultural accomplishment in Mexico.

Cuaron aims for a basic circular motion to plot “Rudo” from beginning to end, rendering the final minutes passionately performed, but lacking surprise. It’s odd to watch the feature entertain such filmmaking elasticity only to scurry for the warmth of convention in the final act. Still, Garcia and Luna share outstanding chemistry together, and provide “Rudo y Cursi” with a definite edge and generous spirit of bewilderment that keeps the picture engaging.