Film Review - Night at the Museum: Battle of the Smithsonian

This being the second go-around with the “Night at the Museum” franchise, it’s clear to me that laughs shouldn’t be the focal point of the material. With all these fantastical events occurring within a cherished educational playground, it feels like a major directorial failure to pursue dollar-store jokes when there’s so much adventure to be had. “Battle of the Smithsonian” has the advantage of hindsight over its ramshackle 2006 forefather, yet it only occasionally lives up to its wondrous, chaotic premise. Instead the film appears more delighted with tiresome improvisational acrobatics than generating a welcoming tidal wave of wonder.

Now an infomercial guru pimping glow-in-the-dark flashlights, Larry (Ben Stiller) has been ignoring his late-night friends at the American Museum of Natural History. When technological advances in education force the magical statutes into storage, the museum contents are shipped to the massive bowels of the Smithsonian, much to Larry’s surprise. With the Tablet of Akmenrah now in a new location, it brings the contents of the buildings to life, including the villainous Kahmunrah (Hank Azaria), who needs the Tablet to raise his feared Army of the Dead. Larry, slipping into the Smithsonian in a stolen guard suit, looks to thwart Kahmunrah’s wicked plan, finding help from his Natural History buddies, and also a new round of creatures and historical figures, including a spunky Amelia Earhart (Amy Adams).

One of the pleasures of “Battle” is finding the “Museum” series tapped out of sentiment, having wrapped up the anemic Larry-the-lukewarm-father routine in the previous motion picture. It’s a gift to have that screenwriting 101 clutter swept out of the way for the sequel, leaving ample space for returning director Shawn Levy to squeeze as much cartoon madness as he can out of the concept, especially within the voluminous hallways of the Smithsonian. Interestingly, this sequel doesn’t want to stun the audience with showboating special effect displays and feats of historical strength, it would rather make everyone laugh. It’s a specific craving from Levy and the production I’m having trouble understanding. 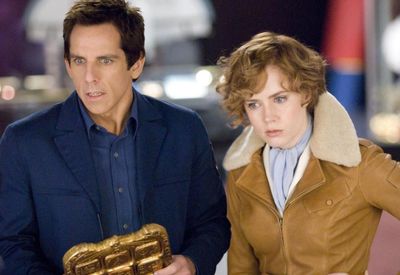 Sure, the “Museum” movies are primarily family entertainment with a strict guideline of slapstick and broad educational merriment. Yet, “Battle” lurches into shapeless Judd Apatow territory, with Levy allocating many scenes to drag out interminably with improvisational jousting between Stiller and the heavy-hitting assortment of comedic actors gathered here to assume history’s finest, including Christopher Guest (Ivan the Terrible), Bill Hader (General Custer), Robin Williams (returning as Theodore Roosevelt), and Azaria (in multiple roles). There are also appearances by Apatow mainstays as Jonah Hill and Jay Baruchel, several cameos by cast members from “The Office,” and Ricky Gervais, back as the jittery Natural History director. Levy is all too eager to hand the film over to these comic titans, but the brutally humorless improvs tend to run the pace of the film into the ground, leaving sections of the picture with nothing to do but stand around and wait impatiently for the comics to exhaust their hackneyed jokes before moving on.

When “Battle” rubber-bands back to Larry’s exhaustive navigation of museum pitfalls, the motion picture reveals itself to be more dynamically mounted than the earlier film. Levy deploys the larger budget wonderfully, showcasing the Smithsonian antics with amazing technological achievements. Not just corralling wax figures this time around, “Battle” has Larry conversing with a group of Albert Einstein bobbleheads, dodging the tentacles of a massive squid, and, in the film’s best sequence, diving into the “Kissing Sailor” WWII victory photo to sneak away from the bad guys, leading to a memorable B&W sequence. “Battle” is generous, inventive eye candy, miles ahead of the previous picture, and the upgraded optical punch enlivens the feature greatly through Levy’s gentle acceleration of CG-enhanced heroics and slapstick. 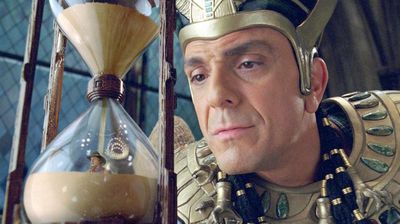 Screenwriters Thomas Lennon and Robert Ben Garant attempt to smuggle in some perverse sort of emotional arc for Larry in the third act that concerns his abandonment of the museum fun he used to cherish, but it hardly makes a dent. Thankfully, Levy doesn’t push the matter too firmly, instead showing more interest in matters such as the adventures of miniature buddies Octavius (Steve Coogan) and Jedediah (Owen Wilson), which culminates in a parody of “300,” though a teeny-tiny one; giving life to the Lincoln Memorial and works from artists Grant Wood and Edgar Degas; imagining a trio of cherubs as the Jonas Brothers; and permitting Amy Adams to steal the movie as the tart-tongued, high-flying feminist who convinces Larry to follow his moxie. At this point, I’m convinced Adams must have unicorns and rainbows for blood. She’s just that overwhelmingly appealing of a screen presence.

While only showing minimal overall improvement over the preceding museum adventure, “Battle of the Smithsonian” at least finds a suitable resuscitation of the core concept. It’s a film best with blockbuster displays of exaggerated mayhem, not doling out cutesy, stream-of-consciousness giggles. Here’s to hoping that the inevitable third installment will lean more toward rousing institutional excitement instead of further enabling an exhausting game of verbal Twister. 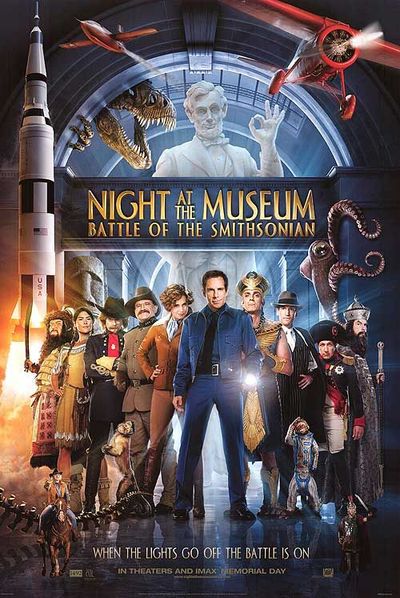