“Management” should come equipped with some type of safety restraint to best absorb the shock of all the uncomfortable tonal changes that continually derail the film. A romantic comedy that’s eager to make a commitment to its characters, yet never takes anything seriously, “Management” is only tolerable in small fragments of performance and laughs. As a whole, it doesn’t know what to do with itself, preferring to wander around blindly in search of a dramatic core instead of actively seeking one.

In Kingman, Arizona for a business trip, Sue’s (Jennifer Aniston) evening is frequently interrupted by the shy advances of the hotel night manager, Mike (Steve Zahn). Agreeing to a supply room sexual tryst, Sue quickly returns to her life in Maryland, while Mike is left to process the strange turn in his lonely existence. Leaving behind the soothing familiarity of his family, Mike travels to see Sue again, only to the find her nervous about his intentions. Sue is open to Mike’s soft-hearted charms, but his borderline homeless life is frightening, urging her to take comfort in the arms of former lover Jango (Woody Harrelson). Mike, determined to make a commitment to Sue, journeys back and forth across the country to win her back, learning his own life is in desperate need of focus.

While buoyed by an earnest effort from first-time filmmaker Stephen Belber, “Management” is a hopelessly erratic picture that desires to tickle the audience with gags, provoke tears with easy sentiment, and spread some awe with situations of personal enlightenment. Within the simple construct of Belber’s script, the film has no chance to breathe and conform suitably to the neck-snapping turns of tone that seemingly invalidate every possible reaction to the picture. “Management” handles like a typical first film, hopeful to provide a rainbow of emotions to feast upon; however, without a veteran behind the camera, the picture gets itchy quickly, losing confidence and empathy the more it widens its scope.

At the core of this whirlwind film is a lovely performance from Aniston, who plays against type as the frizzy-haired wallflower, eager to help save the world but lacking an extraordinary motivation to get her there. While well-versed in sad-eyed manipulation, Aniston nevertheless finds special instances of reaction to Mike’s insanity, conveying an intriguing internal monologue with very few aggressive acting moves. Aniston is a swell counterpoint to Zahn’s tiresome mania -- a familiar act he should copyright at this point. Zahn’s take on Mike is a simple man-boy reading without needed shadings of distress, leaning more toward slapstick qualities Belber is enamored with, but doesn’t have the finesse yet to suitably sell. Zahn and Aniston do share plausible chemistry, but the performances seem miles apart, making it difficult to believe Sue could find any glint of a future in Mike’s fallible hands.

One performance also worth a mention emerges from James Hiroyuki Liao, here playing Mike’s Chinese pal. Generating the film’s only laughs (big ones too), Liao steals every scene he’s in, lending the film a needed comedic thunderclap when called upon.

The third act of “Management,” which takes the action to the Northwest, is a real headache, blending broad comedy and melodramatics with absolutely no success. Belber’s heart may be in the right place as he fights to layer goopy whimsy over ache, but the realization is toxic, sending the story into a tailspin. “Management” ends predictably, but worse, the powerhouse emotions that are summoned are absent the resonation expected, ending this promising, ultimately ineffective picture on a dispiriting note of deflation. 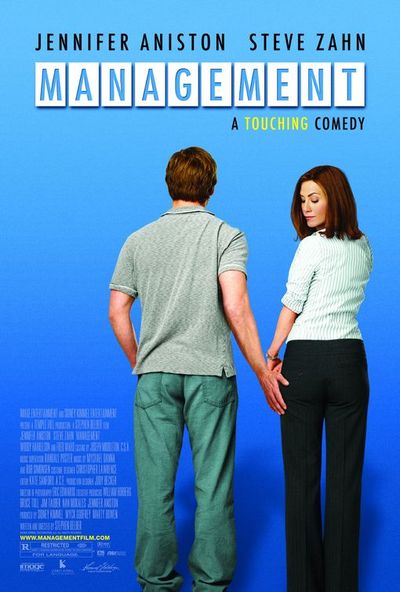