“Killshot” hasn’t enjoyed the easiest road to a suitable release. Filmed nearly four years ago, the picture suffered through endless rounds of editorial indecision, reshooting, and the embarrassment of a pathetic five-screen theatrical release earlier this year. While the feature’s unpleasant personal history shouldn’t be at play during a viewing, it’s hard not to spot the sloppy stitch marks on the motion picture. While certainly endowed with a few startling moments of tension, “Killshot” is messy and unfocused, taking the stinger out of this Elmore Leonard adaptation.

A hitman for the Toronto mafia, Blackbird (Mickey Rourke) is a Native American killer who’s looking to retire to his reservation and find some inner peace; instead, a young, brash, and moronic petty criminal named Richie Nix (Joseph Gordon-Levitt) involves Blackbird in his harassment of a real estate office, and the only two witnesses to the crime are Carmen (Diane Lane) and Wayne Colson (Thomas Jane). A couple on the verge of divorce, Carmen and Wayne are placed into the Witness Protection Program and moved from Michigan to Missouri, where they enjoy the benefits of anonymity, rekindling their attraction. However, the change is short lived when Blackbird and Nix set out to murder the Colsons before more trouble is brought upon the crooks.

While not a tenacious student of Leonard and his treasured literary history, I can’t imagine “Killshot” embarrassing the author. Much like previous Leonard-branded cinematic endeavors “Jackie Brown” and “Get Shorty,” “Killshot” is a dense maze of idiosyncratic characters looking to crime for their salvation, but finding their plans slipping right out of their hands. “Killshot” is a more of a direct take on Leonard’s colorful prose, reducing the heat on any comedic perspectives to plunge ahead as a straightforward thriller. It’s a worthy change of pace from the kooky criminal norm, but this film has been worked over too many times to hold a consistent personality.

Director John Madden (“Shakespeare in Love”) guides “Killshot” with a generous hard-boiled edge, paying specific attention to the psychological turmoil of the characters, especially Blackbird, who never comes across as a one-note villain character, but a man who doesn’t have a home, scarred by guilt and ready to atone for his sins by teaming up with loudmouth Nix. The dynamic between the men is one of toleration and uneasy allegiance, played well by Rourke, who’s an unlikely choice to portray a French-Canadian native, but he manages to turn the role into a riveting depiction of remorse and threat. The accent is incredibly goofy, but there’s a lollapalooza of half-hearted Midwestern, Canadian, and southern accents to absorb in the film that effectively mask Rourke’s 50% effort. Gordon-Levitt is less effective as Nix, amped to broadcast the character’s clueless bravado, but incapable of metering the role to create a larger impact of menace. With such overbearing facial reactions, there were moments when I feared the actor was under the impression he was making a silent film.

To juxtapose the stalking dread of Blackbird and Nix, Lane and Jane share kindly, sorrowful moments as the divorcing prey. Madden seems unusually interested in the subplot, allowing the actors ample screentime to communicate the erosion of intimacy and the awkward circumstance of reunion. For a thriller, these are surprisingly well-rounded characters, adding to the flavor of the picture, taking “Killshot” away from a standard action route and into something passably human.

While absorbing to a certain degree as Madden arranges the pawns on his cinematic chessboard, busing the action all over North America as Blackbird looks to silence the Colsons, “Killshot” remains appealing, just not always believable. I imagine most cuts to the narrative were focused on supporting characters, who sprint in and out of this picture, only defined by the extremity of their personality (Rosario Dawson has a small role as Nix’s sexually frustrated, Elvis-loving girlfriend). “Killshot” has been artificially molded to focus on the four leads, and the residue shows in the erratic pacing and an absence of dimension within the larger trail of dead that Blackbird leaves behind.

Madden gets “Killshot” to a comfort zone of tension and occasional bursts of gunfire, working his way to a showdown scenario that doesn’t feel nearly as organic to the story as it should. The final reel is a serious letdown of twists and bullet-fellating method acting that leans more toward an exploitation movie than it does richly conceived thriller. Guns are drawn, acting aims for the rafters, and interest in who makes it out alive plummets. “Killshot” is undoubtedly a mess, but it’s a nicely contained jumble with a few great moments of thespian interaction to counteract the estimated 1,000 hands that mangled this picture over the last three years of post-production. 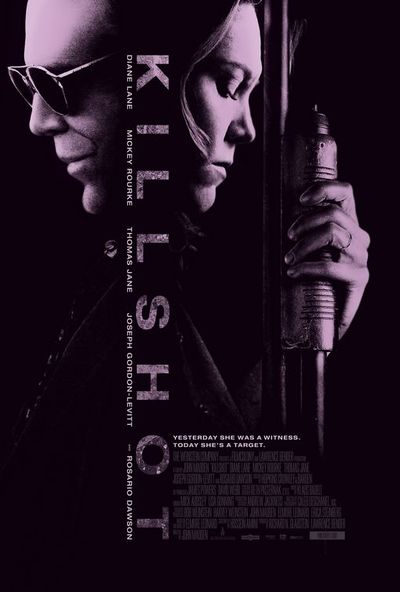 Well crafted if you can overlook (which I cannot) the gapingingly illogical pitfalls that permeate the characters and plot of this film.

This film deserved more attention than it got. Mickey Rourke shines as a worn-out and depressed half-Indian hit man. The real star, however, is Diane Lane. She acts flawlessly and projects a sexiness and sensuality that transcends boobs and butts.