The droll poise of playwright Noel Coward is returned to the screen in Stephen Elliot’s “Easy Virtue.” A firecracker of a period comedy brought to life by some of today’s most elegant actors, “Virtue” possesses marvelous edge, wit, and pace, yet this latest incarnation of the 1924 play should be defined by one single, utterly shocking element: Jessica Biel. Turns out the young lady can act some, keeping up with the tempo of this culture comedy like seasoned pro.

Returning to his childhood estate in rural England, John Whittaker (Ben Barnes) is eager to show off his new wife, daredevil American race car driver Larita (Jessica Biel), to his dysfunctional family, including his uptight Mother (Kristin Scott Thomas) and disconnected Father (Colin Firth). Without even trying, Larita’s brash American ways strike fear into the heart of the family, leaving the young woman a bored, confused outcast halfheartedly attempting to fit in with traditions she wants nothing to do with. Fearing her marriage is in jeopardy, Larita makes a concentrated effort to befriend her nervous mother-in-law, finding the emotional ice between them indissoluble, and the old-fashioned interaction of the estate’s residents too constricting for comfort.

A production by the world-famous Ealing Studios, “Easy Virtue” endeavors to depict a bygone oral rhythm to its screen comedy. Using Coward’s acidic social criticism as a starting point, Elliot burns through the material with extraordinary speed, imagining Larita’s sudden entrance into the imposing Whittaker household as a psychological Normandy invasion, with verbal bullets fired in every direction as the family struggles to take in the extravagance of Larita and her crude foreign ways.

It’s a constant juggling act for Elliot, who’s required to find a sense of depth to the story while making sure the comedy is served up with a mind-spinning tartness as the golden one-liners roll out one after the other. Elliot handles the substantial workload quite satisfactorily, paying careful attention to scene transitions and performance velocity to help grease the way for the ornate dialogue and eventual arrival of melodrama. It’s shot and edited beautifully by the production, who set the pace early on, enlivened by the dramatic possibilities of frustrated feminist Larita trapped in the viper’s nest of conservative England.

On one hand there’s Thomas and Firth finding delicious beats to play as the bewildered parental figures, with Mrs. Whittaker chiefly cramped between an allegiance to her dear son and her natural offense to anything American. Still, Biel comes off the strongest, partially because she’s never delivered this accomplished a performance before. As a platinum-blonde bombshell that places her adventures on hold to try on marriage for a second time, Larita is a tricky character used by Coward to define the slapstick, heartbreak, and social defiance of the period. Biel gets to Larita’s soul quickly, and she’s able to verbally joust with her co-stars seamlessly. It’s a role that fits Biel well, nicely showcasing nuances and confidence she’s rarely offered the camera before.

When “Easy Virtue” looks to amuse, it’s incredibly effective, orchestrated with dizzying tempo by Elliot. When the story decompresses in the final act as Larita chooses between her marriage and her heart, it puts a damper on the proceedings, applying brakes of exaggerated frustration to such a fluid plot. The stinger is ultimately removed from “Easy Virtue,” but it doesn’t completely sour the overall motion picture experience. After all, just watching Biel share the frame with Thomas and Firth and not immediately crawl into a fetal position is nearly worth the price of admission alone. 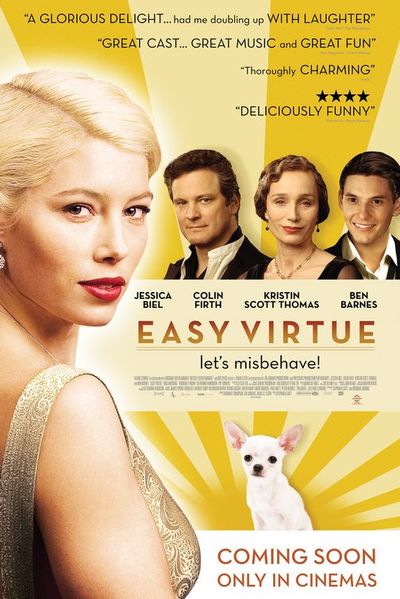