It seems these days every genre film wants to add a pinch of verisimilitude to their diet, searching to find a fresh take on antique thrills. “Big Man Japan” aims to rework the gravity of the monster movie, looking to create a world where not only monsters are real, but the man sent to battle them has terrible domestic problems, surrounded by a populace that would rather see him quit. Director/star Hitoshi Matsumoto’s graceful satire “Big Man Japan” is a viewing experience akin to a leisurely acid trip, but it’s also one of the more original, surprising visions of the year.

Masaru (Hitoshi Matsumoto) is a lonesome, depressed guy bumming around Japan while a television crew interviews him, peppering the withdrawn man with questions covering the mistakes of his life. While guarded, Masaru has a very public day job: protecting Japan from a series of destructive, building-sized monsters. Using electricity to help blow himself up to fighting size, Masaru does his best to keep his family name alive with his efforts, though the local community often disapproves of the results. Caught in a depressive haze due to his marital woes and imposing family legacy, Masaru’s strength is put to the test when a demon-like monster arrives who’s more than capable of beating the notorious “Big Man Japan” to a pulp.

Structured like a documentary, “Big Man Japan” is perhaps less thrilling than it sounds. Hitoshi Matsumoto holds off on any promise of mayhem for the first, potentially torturous 25 minutes of screentime, gradually introducing the audience to Masaru, a man who understandably clings to the mundane details of his life. Fielding invasive questions from the camera crew and going about his daily business of meals and silent reflection, Masaru is a broken man, the antithesis to the gargantuan hero he’s forced to become. The director mines the gloom wonderfully, taking ample screen time to allow Masaru’s life to be absorbed properly, while hinting at the outrageous sights to come. “Big Man Japan” is a game of inches, and the static pace of the film could be agony to those expecting a buoyant monster mash of increasing Japanese idiosyncrasy.

When the time comes for Masaru to become Big Man Japan, the film veers off into the cartoon realm, with CGI taking over to depict the brief skirmishes between our electrified hero and a series of head-spinningly wacky creatures (one of the beasts simply swings around its giant eye as a weapon) that drop in out of nowhere and often knock themselves into submission. Clad in gigantic purple underwear and armed with a stick, Masaru still retains the same insecurities as a regular sized man, leaving his fight skill based more on sudden opportunity than premeditated aggression. Having inherited his protector mantle, Masaru is cursed by his massive size; a character beat communicated wonderfully in the picture through particular animation and cleverly detailed flashbacks to the heyday of post-war Japanese monster fighting that has sadly withered away due to the public’s growing skepticism. Masaru, eager to inherit a king’s welcome instead has to make due with a cold shoulder, with television ratings of his monster battles in the toilet and the public making sure to let him know he’s not welcome.

As “Big Man Japan” unspools, the characterization of Masaru grows stronger, exploring his troubled home life as a contrast to the fantastical “Godzilla” sights and sounds audiences are accustomed to. While a comedy at its core, “Japan” finds unusual intimacy with the lead character, and I was stunned to find the glacial pace actually invites a faint emotional investment in the bizarre happenings, while remaining an effective reflection of genre mechanics and Japanese nationalism.

Rolling to an ultimate showdown between Big Man Japan and the red menace, the picture takes a severe left turn into parody….or social commentary…or something. Assuming a television “live feed,” the film abruptly transforms into a cheesy “Ultraman” event, trotting out the rubber suits and cardboard Tokyo skyline that’s a familiar sight to any fan. It’s an absurdist spit-take on an unusually meditative production, and the twist pinches hard on the senses. Perhaps farce is an appropriate finishing move to a complex, ambitious statement of gigantic destiny, and while I didn’t fully compute the inspiration behind the final 10 minutes, I admire the purposed chaos. 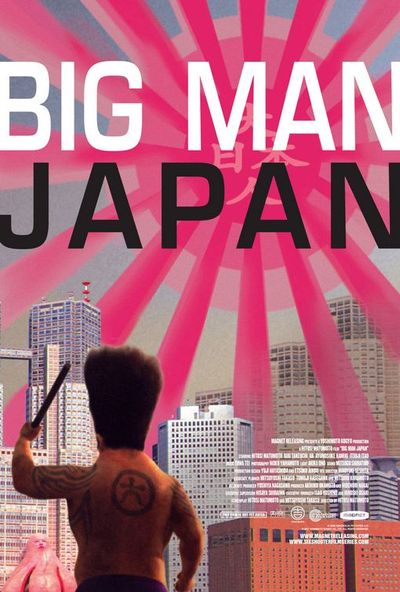